We like smelling good — and our significant others smelling good — without spending a fortune. And we learned the hard way that this isn't reasonably accomplished by buying knockoff brands at gas-station convenience stores. (We also learned that Drakkar Noir actually isn't the best man-scent out there, regardless of what that dude selling it out of the back of his van told us, but that's a story for another time.) So that's why Perfumania is our number one choice when it comes to cologne and perfume. You get a huge selection without putting a huge dent in your pocketbook — and we're talking top-shelf stuff, too, not just the same-old, same-old you can get with a free gym bag at any department store. If you want to expand your olfactory horizons, there's no better place to start than Perfumania.

Because you just never know when you might want to buy a Pink Panther clock at 1:30 in the morning. Fantasy Gifts and Toys resembles an overstuffed, naughty museum, and has been outfitting Houstonians who are up to no good for more than 30 years. Conveniently located near most Lower West­heimer bars including neighboring Catbird's, Fantasy offers hundreds of glass pipes (many made by local craftsmen), vaporizers, hookahs, papers and any other smoking accessory you can think of down to the skull ashtrays. Then there's the T-shirts, rock posters, candles, costumes, other miscellaneous gifts — antidepressant refrigerator magnets or Reservoir Dogs figurines? Tough call — and an entire wall of, well, adult toys. Sometimes that Pink Panther clock just isn't enough, and only something called a "Naughty Judge" or "Wabbit Tickler" will get the job done. 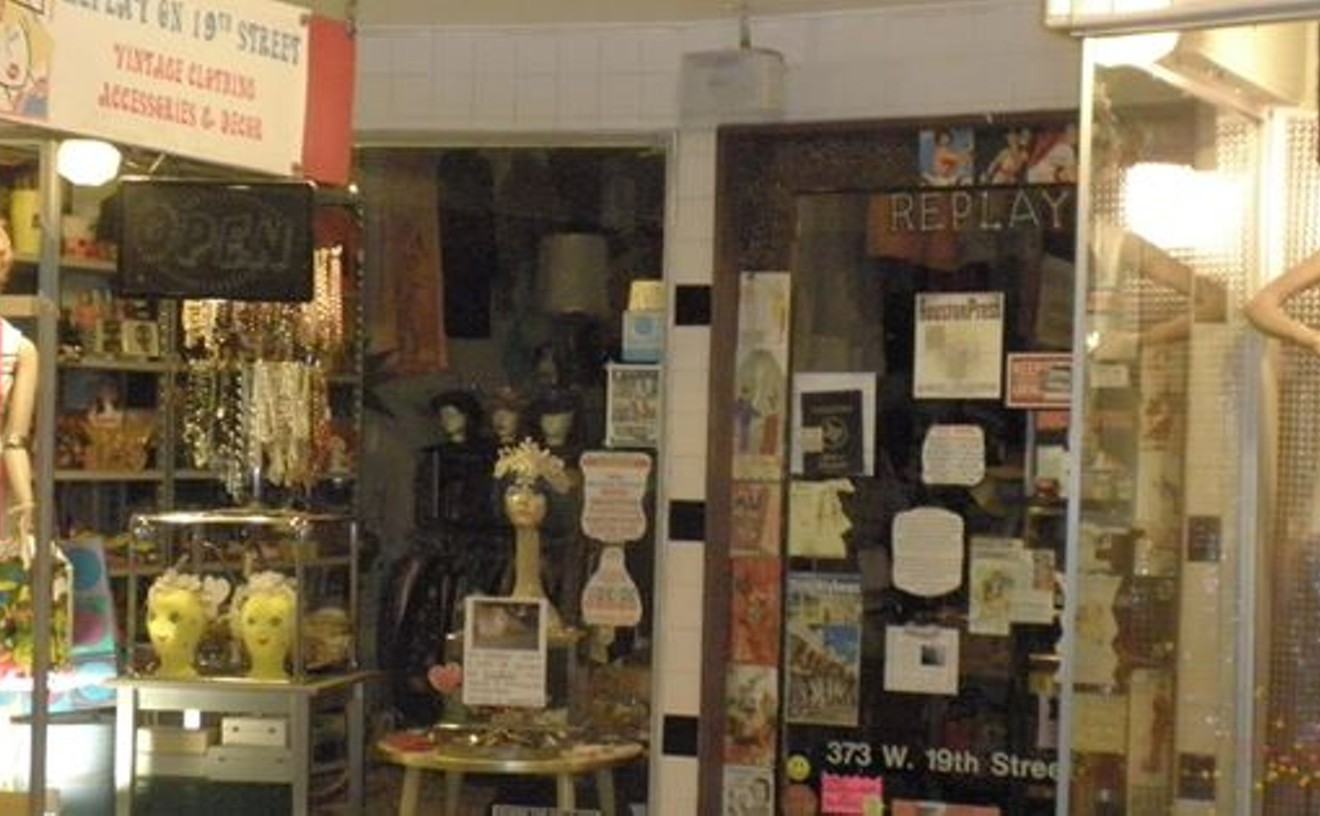 Laura Levine and "Crazy" Mike Hildebrand curate their Heights-area store so carefully, they almost have an encyclopedic knowledge of every item and its location. Looking for embroidered cowboy boots, Polynesian mod or an old concert T-shirt? Just ask at the desk, and if they have it (they likely do), they'll take you right to it. Prices are super-reasonable considering you're saving yourself the hassle of digging through bargain bins at thrift stores, plus they take trades and get new items at least once a week. One of our favorite things to shop for at Replay is vintage swimsuits. Follow them on Facebook for advance notice of new hauls.

Sometimes, just for fun, we'll browse through Big LeRoy's enormous online inventory, randomly picking a car, looking at the photo of it sitting there in the yard, and poring over the VIN breakdown. The other day, we clicked on a 1991 Accord at random, saw all the parts that were available, as well as what condition the car was in, and thought to ourselves that, if we ever needed a fender from a 1991 Accord, how freaking cool would this be? And that's what Big LeRoy's is all about: customer service. You can find what you're looking for before you even make the drive over, plus you'll be assured of a good price. 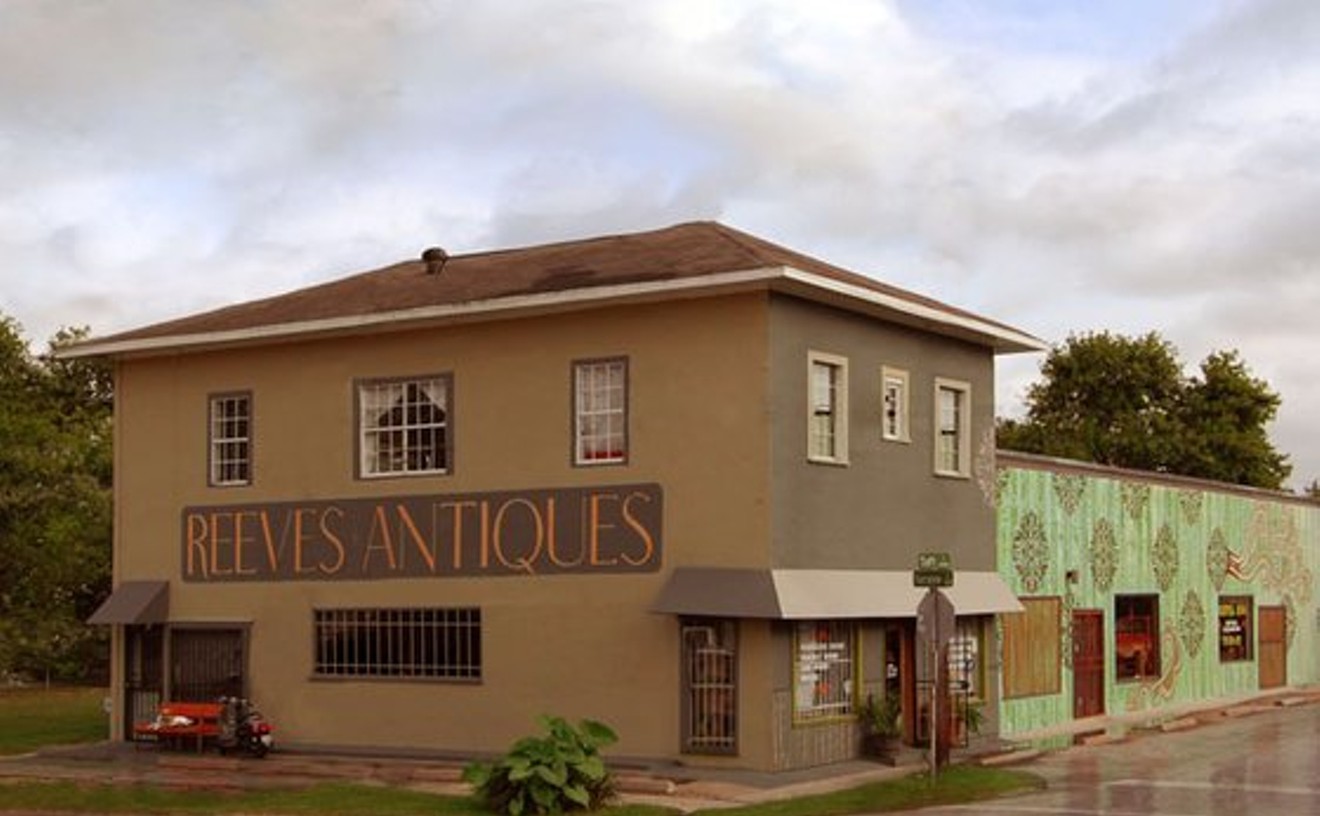 Though Reeves, located at the corner of Taft and Fairview, specializes in Mid-Century modern, that's not all the father-and-son team has to offer. Their selection of MCM is, however, one of the best in the city, especially when you factor in the prices, which are the lowest we've seen for good-condition vintage outside of garage sales and Craigslist. 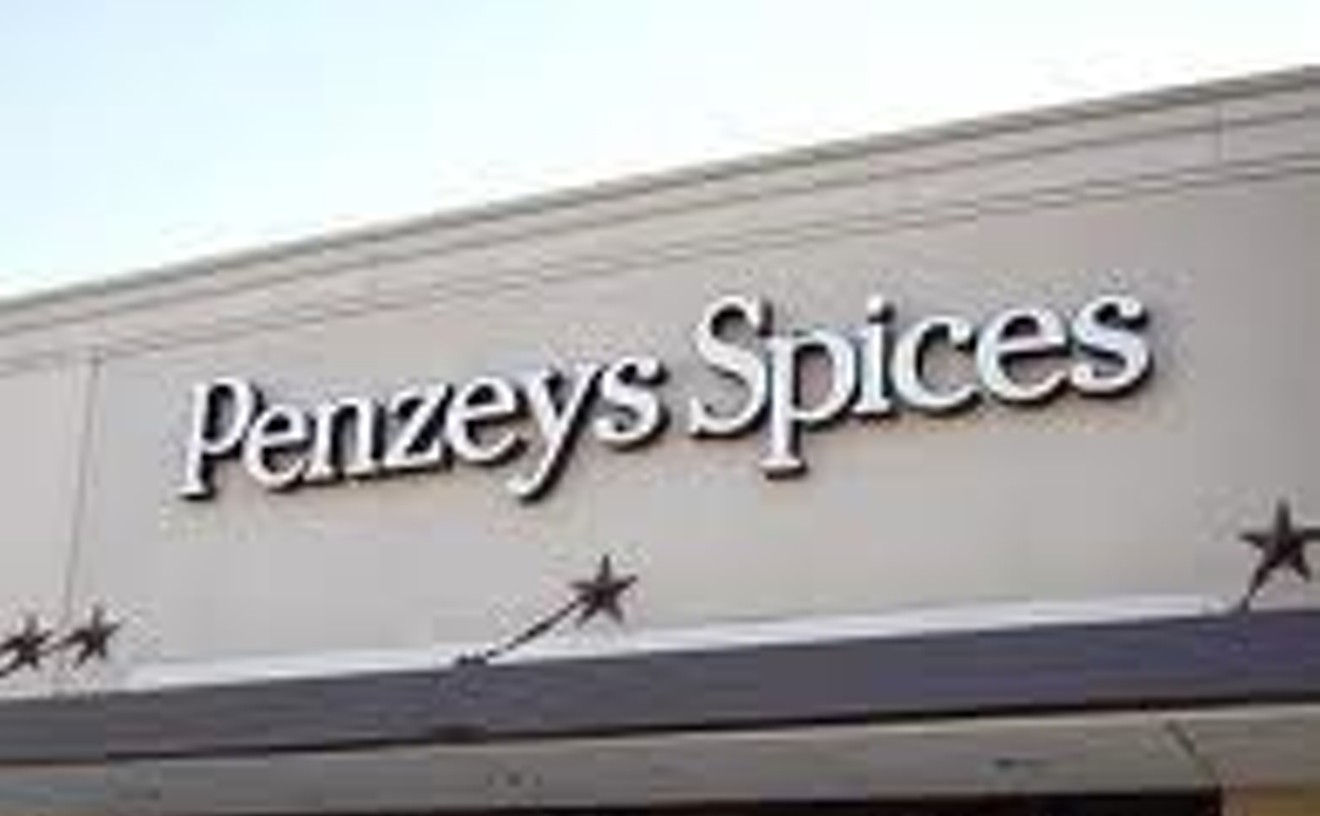 Of course Penzeys Spices is the best spice shop in the Houston area, you say. It's the only spice shop. Not true: There are specialty shops and grocers all over, some catering to only one type of cuisine. There are Chinese stores, Vietnamese purveyors, a Russian general store...we've seen them all in our culinary pursuits through Houston. But any spice you've ever dreamed of, you'll find at Penzeys. And then some. Think of the iterations of spice combos possible in this place! Being the only real game in town has not made them snooty, though. Pam and the other kind women who work there cater to you as if you are the only customer they've ever had. 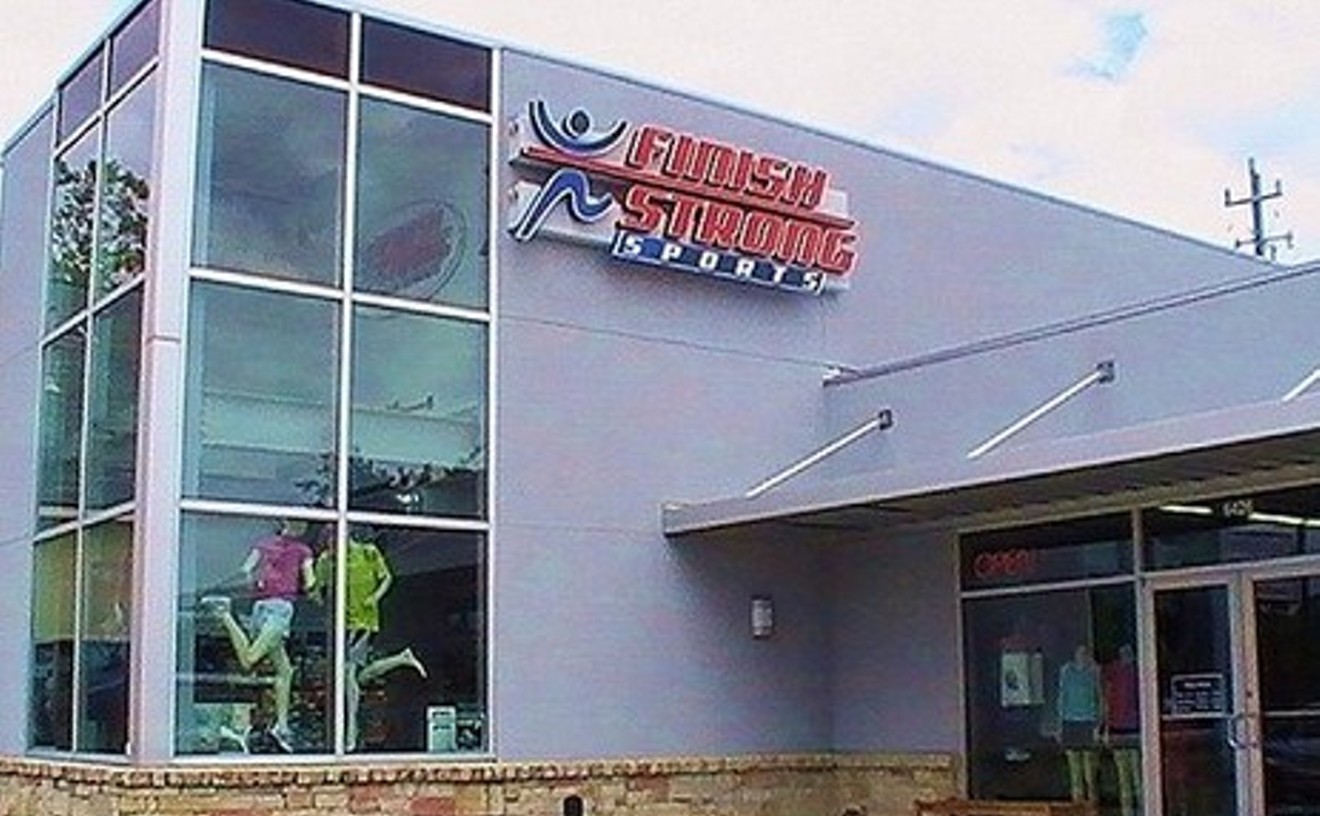 Conveniently located just a few blocks away from Memorial Park, Finish Strong Sports is a runner's paradise. Staffers help fit you in the right running shoes, offering expert advice so you don't end up wearing a pair of fancy sneakers that will turn your feet into hamburger meat. When you finish your first marathon, be sure to send the staff some cupcakes. They'll just run it off anyway.

Want to spruce up your place but aren't sure where to start? Have no fear: The professionals at Calico Corners will help find the right look for you, whether you choose an in-store or in-home appointment. Oh, and did we mention that this wonderful consultation is free? Yeah, free guidance from experts who know their way around the 7,000 kinds of fabrics; the 250 furniture frames; the custom bedding options; the window treatments; and all manner of valences, treatments, coverings and other thingamajigs that will make your guests instantly jealous and ashamed of their own crackhouse-like dwellings. It doesn't matter if you don't know a duvet from a doily: These people are here to help, and if you're smart, you will let them.

If you are smitten with the perfect set of sconces or French doors or bathroom vanity or just about anything in this warehouse, you'd better snap it up: "About one half of the donated inventory moves in about a month," says staffer Mark Goodson. When Habitat picks up donations from people's homes, ReStore is where it lands. But the inventory is "not just torn out of a house," Goodson says. ReStore buys at a low cost from, for example, vendors for flooring materials such as laminate and tile, and adds a modest markup. They can even mix paint. Some companies, such as Lowe's, donate discontinued items such as wood cabinetry — three finishes, including a scrumptious cherry, are available — for the cost of unfinished wood from most dealers. ReStore customers are giving to a greater cause, as Habitat is able to build an average of one house from the monthly sales at each retail outlet. Don't forget networking: We found an excellent carpenter, James Montgomery, who's one of the volunteers at the store. 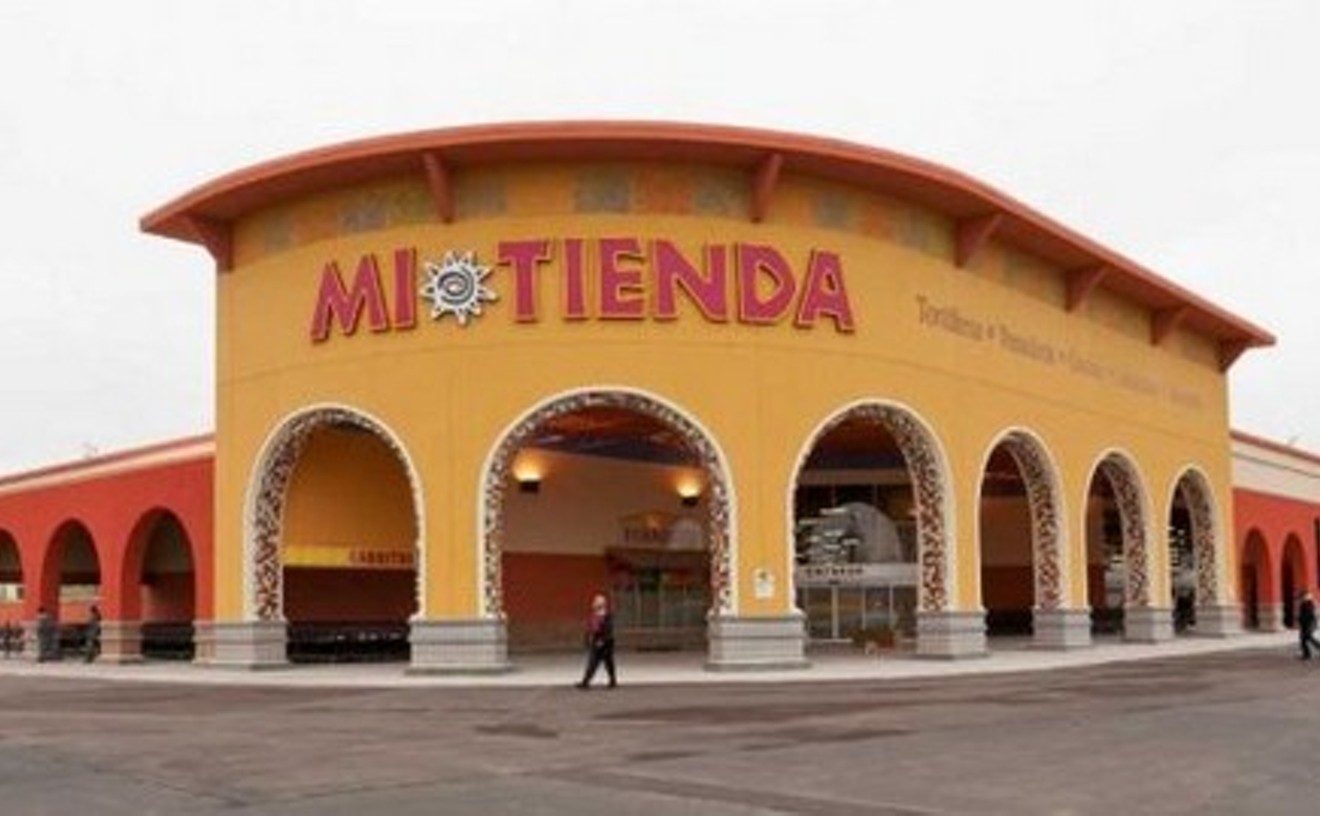 Score another one for H-E-B. Last year's winner was the South Houston/Pasadena location of their Mexican/Central American supermarket; this year's gran campeón is the Northside behemoth that opened last December and made the first one look like a mere bodega by comparison. Like its predecessor, the Northside Mi Tienda features a tortilleria, a carniceria and an aguas frescas bar, not to mention every spice, fruit, vegetable, queso and edible cactus from Tegucigalpa to Nuevo Laredo, all available at rock-bottom Walmart prices. Here's the thing: At 97,000 square feet, it's double the size of the Pasadena store and has a selection to match beyond its festive mango exterior and Saltillo-tiled portals. The meat counter is the length of a football field, and the tortilleria churns through so much corn, this Mi Tienda has its own freaking silo, one capable of storing 18 tons of maize. In the beer coolers, there's every Mexican brew available on this side of the river and quite possibly the world's largest retail inventory of Bud Light.