Solange: A Seat at the Table

The Knowles sisters are among the few superstar musicians who belong as much to Houston as to the world, and since Beyoncé's Lemonade came out just before our timeline, Solange doesn't even need to flex. Her first No. 1 album, A Seat at the Table, is as much an artistic statement as a public one, speaking to issues of race, gender, injustice, self-care and self-reliance, in language that is both poetic and plainspoken. It's a self-assured work, recalling the confidence and content of Nina Simone, a soundtrack to the pain and promise of America, with a loose-fit, unstuck-in-time production style filled with '60s spoken-work interludes, '70s funk zing and '90s R&B zang.

Best Meeting of Art and Music 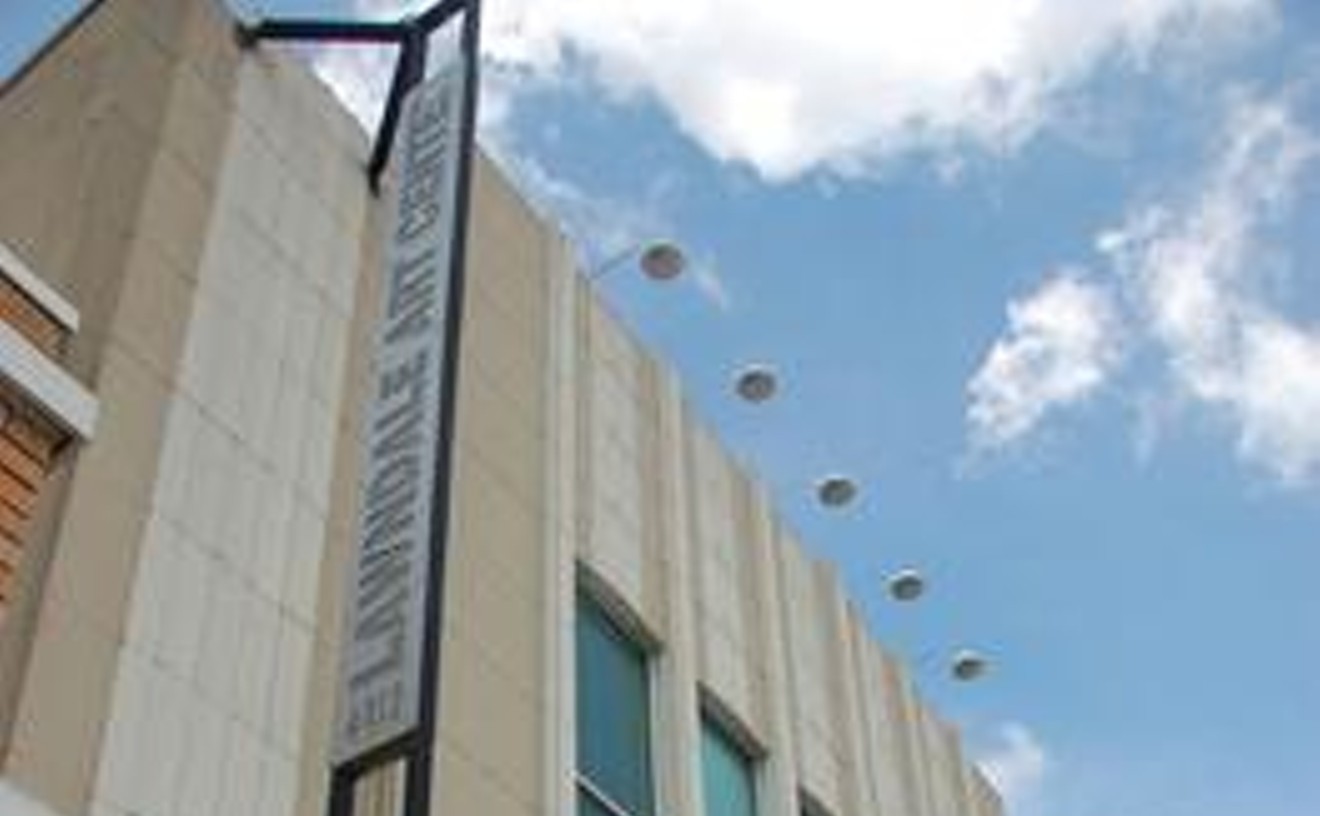 Many people will see this category and first think of Day For Night, and for good reason — that immersive festival of art and music was an amazing spectacle. But direct from various fighting pits of the local artistic landscape, the most recent of which being the gladiatorial ring of Lawndale Art Center's Studio Program, artist Randi Long managed to pull off a dark horse win with her installation in the Temporary Havens exhibition organized by guest curator Dean Daderko of the Contemporary Arts Museum. Long installed various scrappy-looking metamatics and messy assemblages of homemade contraptions, hard-wired for noise and scribbled all over with someone's handwriting, presumably the artist's. The overall effect was both that of a crash, with various things scattered hither and thither, loudening up the place, and that of a crash course, namely in Dada, with plenty of shade-tipping to Jean Tinguely, Marcel Duchamp and Hugo Ball.

Normal people living everyday lives, as seen through the eyes of artist Ron Mueck, are transformed into dramatic vignettes through imagination and artistry. Mueck has a way of telling a story that transcends race, age and gender, and reminds us of our common experiences. The 13 hyperrealistic sculptures on view at the Museum of Fine Arts, Houston, this spring and summer demonstrated fear, tenderness, weariness and love — our collective journey from cradle to grave — in scale both small and large. Props also to curator Alison de Lima Greene for letting the stories unfold so beautifully. 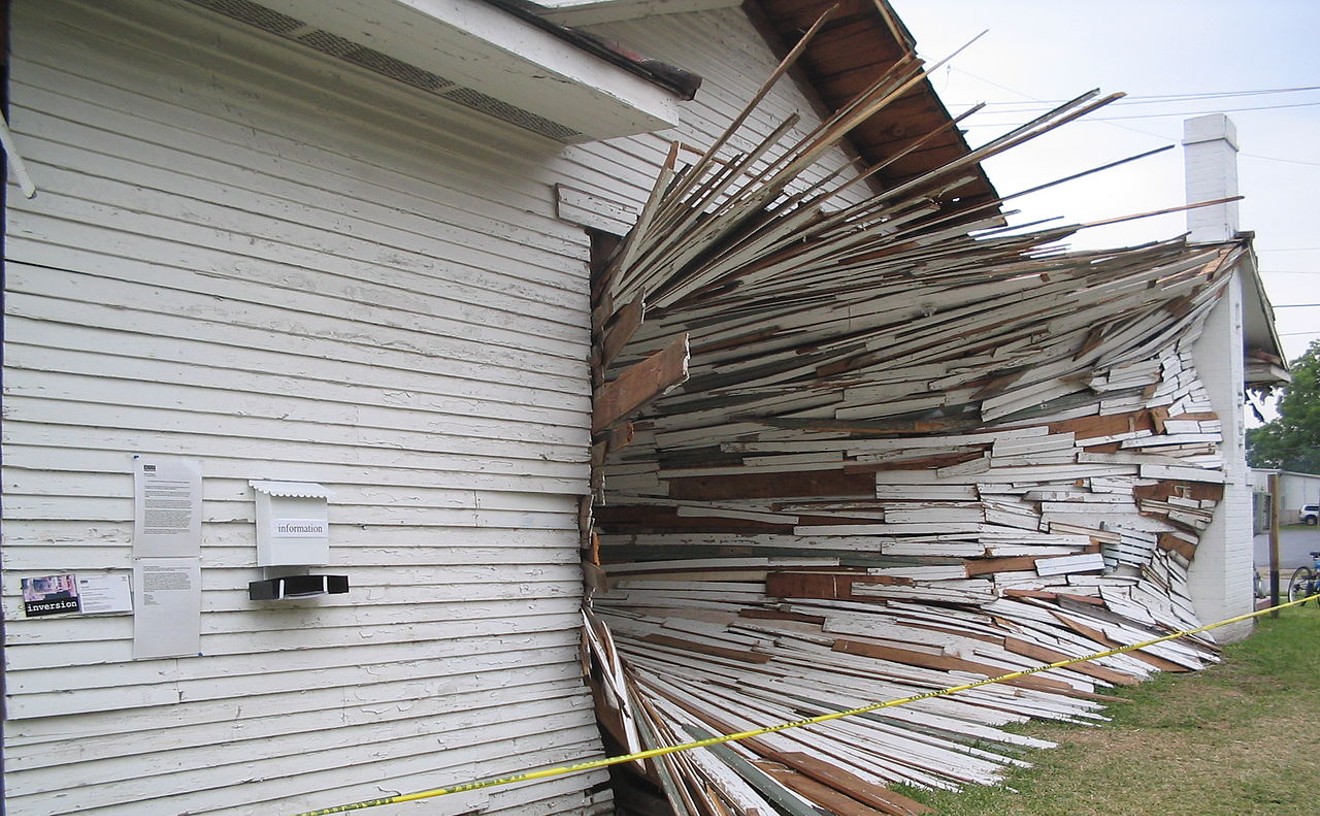 Even before the Art Guys went and married a tree, the collaborative team of Havel and Ruck were bucking for a crown. They had a huge hit with their Montrose installation Inversion, but Sharp is even better. For this site-specific thingie, they disemboweled, repainted and copper-clad the innards of a fire-damaged mid-century home, transforming it into a glowing, ascetic-and-aesthetic mystery attraction, an impeccably executed piece of art detoured from architecture. What's more, it was brilliantly sited on a quiet residential street in the Sharpstown area, as likely a front-runner to become the Montrose of Houston future as any. 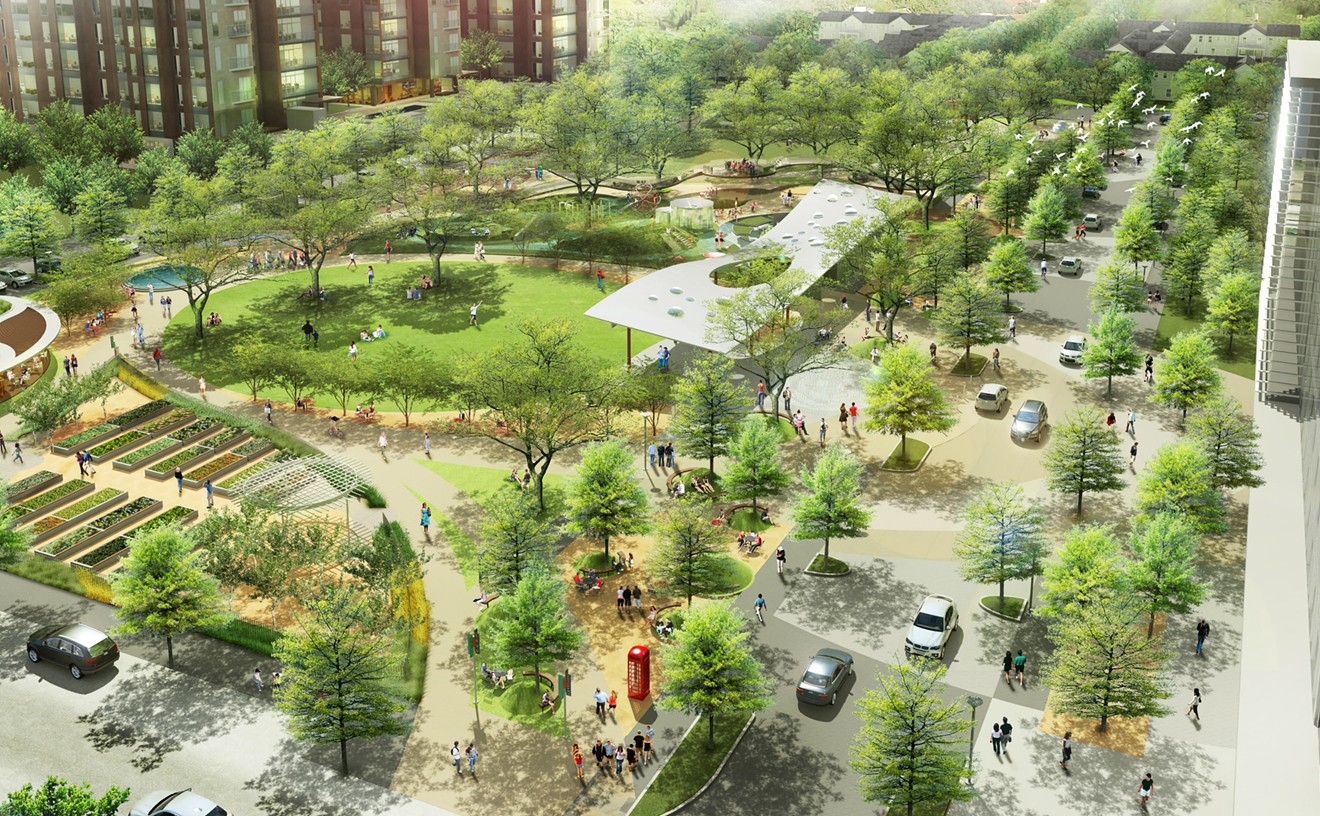 Rendering courtesy of the office of James Burnett

Levy Park is not new, technically, but after the $15 million in renovations completed early this year, it's Upper Kirby's newest destination for fun. Originally given to the city as a gift in 1952 by merchant and philanthropist Leon Levy — a descendant of one of Houston's earliest families — the park, a plot of more than five acres just up the road from Greenway Plaza, has sprung back to life thanks to careful coordination between the city, governing body Levy Park Conservancy and its mixed-use neighbors (including one more next year, the Woodshed Smokehouse restaurant). The park now boasts a covered pavilion, two expansive lawns, a community garden, a children's play area and splash pad (including a nifty molecule-like climbing toy), abundant seating, and carts full of board games and art supplies for creative types. Its calendar has likewise quickly filled up with events such as concerts, festivals, gatherings and a whole lotta yoga. It would be very hard indeed not to find something to do at Levy Park — up to and including just lounging in the shade of one of its majestic live oaks. Watch for programming updates on Twitter at @levyparkhouston. 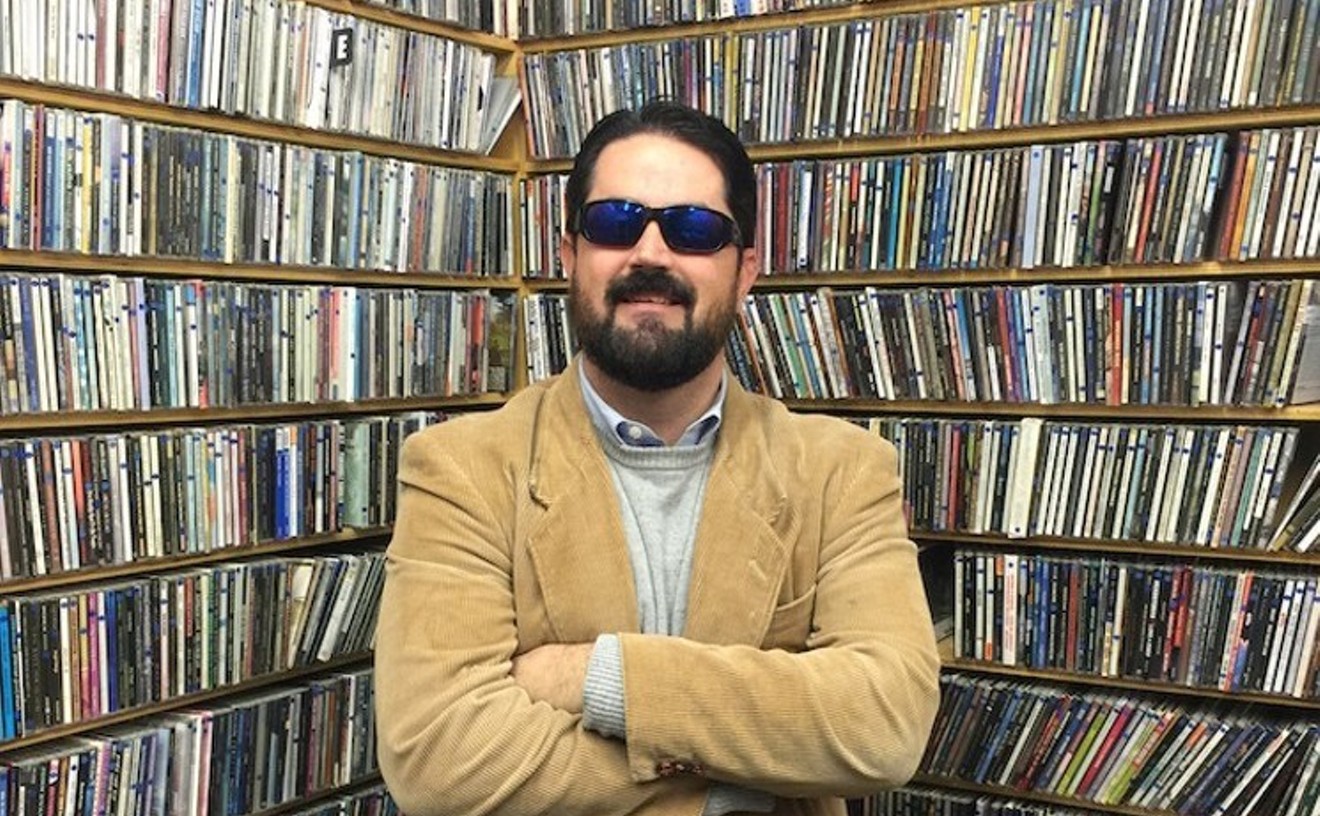 Shaun Brennan's Splice Records specializes in so-called "confused genre musicians," acts that might sound great over a cold one or two at an icehouse, another Houston specialty. An offshoot of Splice of Life Productions, the banner of Brennan's film/video projects since his school days, the label sprang to life after the 2013 demise of the Artery, the long-running multipurpose art space where Brennan had been a longtime volunteer. Not by coincidence, Artery musical alumni Craig Kinsey, Arthur Yoria, John Evans and "Pecos" Hank Schyma now make up the bulk of the Splice roster. Brennan and Kinsey, the story goes, decided to start the label after a long night of Johnnie Walker and music; the album Kinsey played for Brennan, American Roots and Machines, became Splice's first official release in 2014. Besides the annual BowiElvis Fest, which capitalizes on the two late rock icons' shared January birthday, the label also sponsors the annual River Revival music/camping festival in New Braunfels — a convenient platform to promote the label's artists, to be sure, but also further proof that Splice's fan-first philosophy filters from the top down.

For more than 30 years the Inprint Margarett Root Brown Reading Series has been giving locals the chance to hear Pulitzer- and Nobel Prize-winning authors read from their latest works and offer all kinds of insights about how they crafted them. The 2017-2018 season brings yet another dazzling array of authors to town, with readings scheduled for Jennifer Egan, Claire Messud, Viet Thanh Nguyen, Paul Auster, Jhumpa Lahiri and a slew of other writers. What makes all of this even better is that tickets to these readings cost roughly the same as a Starbucks iced coffee. There's only one place that makes the blue fiery glow of a Scorpian Bowl — as it is freshly set on fire with a small blowtorch —­ look its absolute sultriest and that's the Lei Low Bar. Dark as the inside of an old ship and kitschy as all get out, this Heights favorite has the tropical and divey tiki vibes on lock. From mermaids and hula girls to velvet paintings of buxom pin-up models, the art here doesn't disappoint, nor does the rattan furniture or various carved tikis, all of which look plundered from the set of the Golden Girls or some midcentury modern estate sale in Southern California from the days of Jan and Dean. If it's a quiet night here, this is a perfectly romantic escape with a beach bar feel and mood lighting for days. But if it packs out, patrons can simply escape out back to the patio with its signature plumeria, the tropical flowering tree that's popular in Hawaii for its beautiful lei flowers.

The gargantuan metal sculpture along Avenida Houston is lovely by day, offering a playful fountain for the enjoyment of passersby and a gently waving kineticism for those lucky enough to look up from their smart phones. But it's at night when the brainchild of artist Joe O'Connell and Creative Machines really soars, as the color-changing lights impart kaleidoscopic brilliance to the stainless steel, aluminum and Stamisol feathers. Sure, it looks just a bit like a giant, slow-moving cockroach, but that's okay, because we do things big here in the Bayou City. 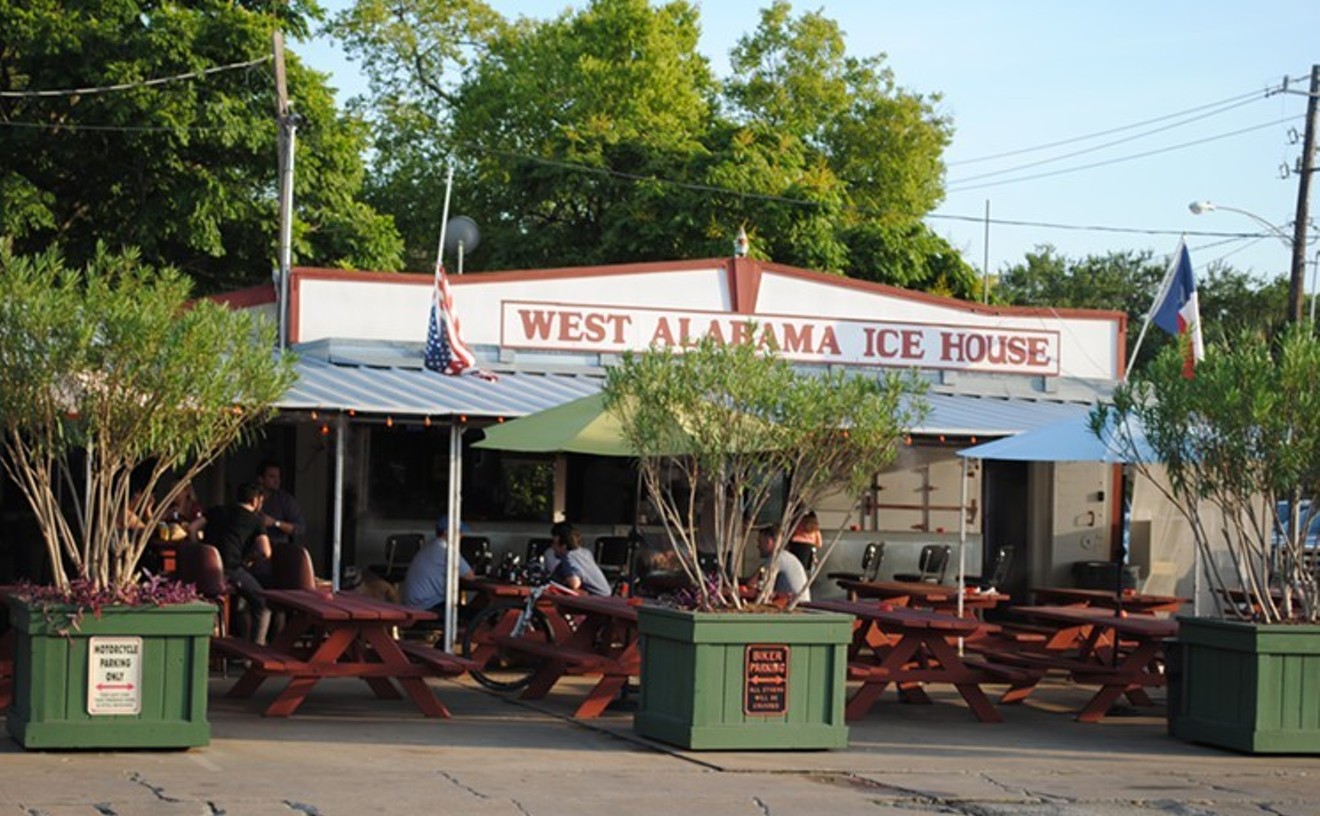 There's a satisfying simplicity at West Alabama Ice House. With few frills and nothing fancy, you'll get exactly what you want at this classic haunt: cheap, ice cold beer, a giant dog-friendly patio full of large picnic tables, and maybe a football game on TV or a game of pool or bags if you're feeling competitive. Or even H-O-R-S-E if you're up to it. Don't forget to grab some tacos at the taco truck parked across the street.