With a team of professional dancers, a repertoire of more than 60 pieces, a robust center that offers an array of classes for children, teenagers and adults, and more than 20 years in the game, the Houston Metropolitan Dance Company (colloquially METdance) has the professional dance company thing down pat. The just-completed season, led by artistic director Marlana Doyle, included Breaking Borders at The MATCH, a program that featured four diverse dance offerings ranging from pieces inspired by Polish traditions to those set to New Orleans brass-band music. The company's upcoming season, its 22nd, will see METdance taking on the concept of "home," meaning that artists who have lived or currently live in Texas will showcase repertory and new works throughout this year and next. 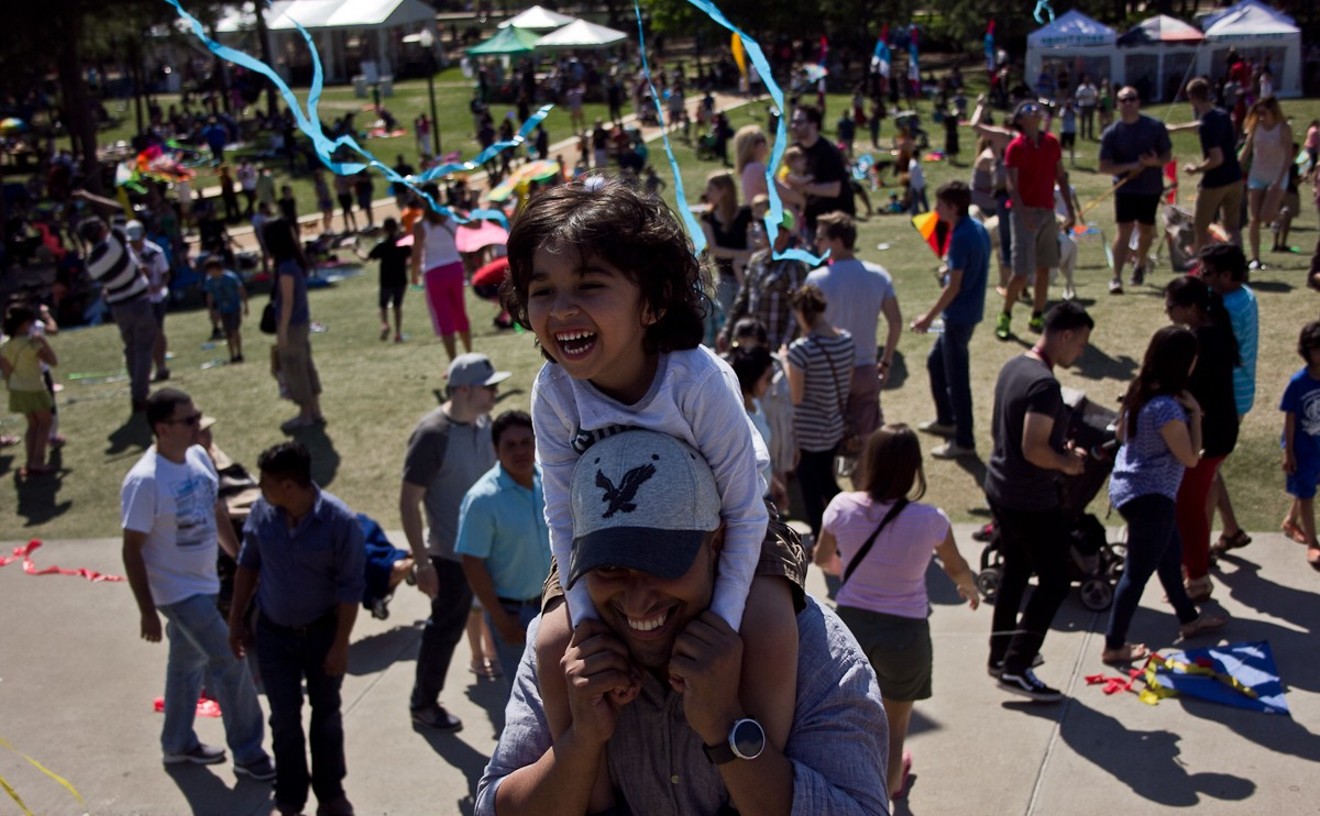 Hermann Park is the kind of place you go when you need to remind yourself that, to a certain extent, it's still possible to get lost in nature even inside the Loop. And whether your idea of relaxation is taking a hike through any number of the park's trails, exploring its various gardens, or taking a book and a blanket and a basket of food to the pond, you're bound to find a number of spots to take a breather. Houston is full of great small rooms, but few can compete with the ambience of Cactus Music. In an increasingly digital world, live music is one of the few things you can't perfectly replicate in zeros and ones, just like you can't reproduce the feeling of flipping through stacks of vinyl looking for just the right release to take home. The sight lines are always good, the sound is nice and free drinks from Saint Arnold certainly don't hurt. When the musicians you love come to town, keep your fingers crossed that they're making an appearance at Cactus Music; you won't find a better place to get up close and personal with them. Photo by Patrick Breitenbach via CC

Mining Houston's creative community and the occasional extreme fighter for insight and laughs, the Dead Dialect Podcast duo of Brandon Clements (once a Houston Press music writer) and his friend Julian Lara prove that, with the right digital-age tools, the ancient art of conversation has lost none of its appeal. Clements and Lara's long-form, uncensored chats touch on a host of topics, for instance MMA, comedy, social media and, in periodic special episodes labeled "The Drunk Table," booze and its side effects. Mostly, though, the duo loves to talk Houston music, and since May 2014 has done so with dozens of stars like Kam Franklin, Gabe Bravo, Jon Black, Guilla, Handsomebeast, Devil Killing Moth and many more; out-of-towners Warpaint, Dandy Warhols and Silversun Pickups have stopped by as well. Pressing pause after an episode with Silicon Valley's T.J. Miller, Clements and Lara rebooted DDP on YouTube and ventured to Madness On Main and New Braunfels' Float Fest. Right now even greater things await — in July, Clements was chosen as one of 15 winners in skatewear outfitter Volcom's global #ThisFirst contest, which netted him $5,000 and six weeks with a pro mentor. Watch this space.

It's always a good sign when there's a mohawked punk rocker hanging out front, smoking a cigarette, while inside a jazz combo seemingly has its own band practice. The ever-relaxed Catbirds is also home to various regulars who know which side of the U-shaped bar to sit on for quick service (tip: saddle up on the right) and like to watch sports on the big screens or play NTN Trivia. The Dark and Stormy here is excellent, a true testament to a great neighborhood bar, and the editions of Trivial Pursuit on the shelf, which you can use to see which among your pals is the biggest geek, run deep. This is a no-frills destination with an okay happy hour and almost laughably ugly tables and chairs. There's even a popcorn machine that nobody ever seems to eat the popcorn from. Is it even real? Heaven knows the people here sure are, and that alone makes Catbirds a nice respite from the trendier destinations along Westheimer. 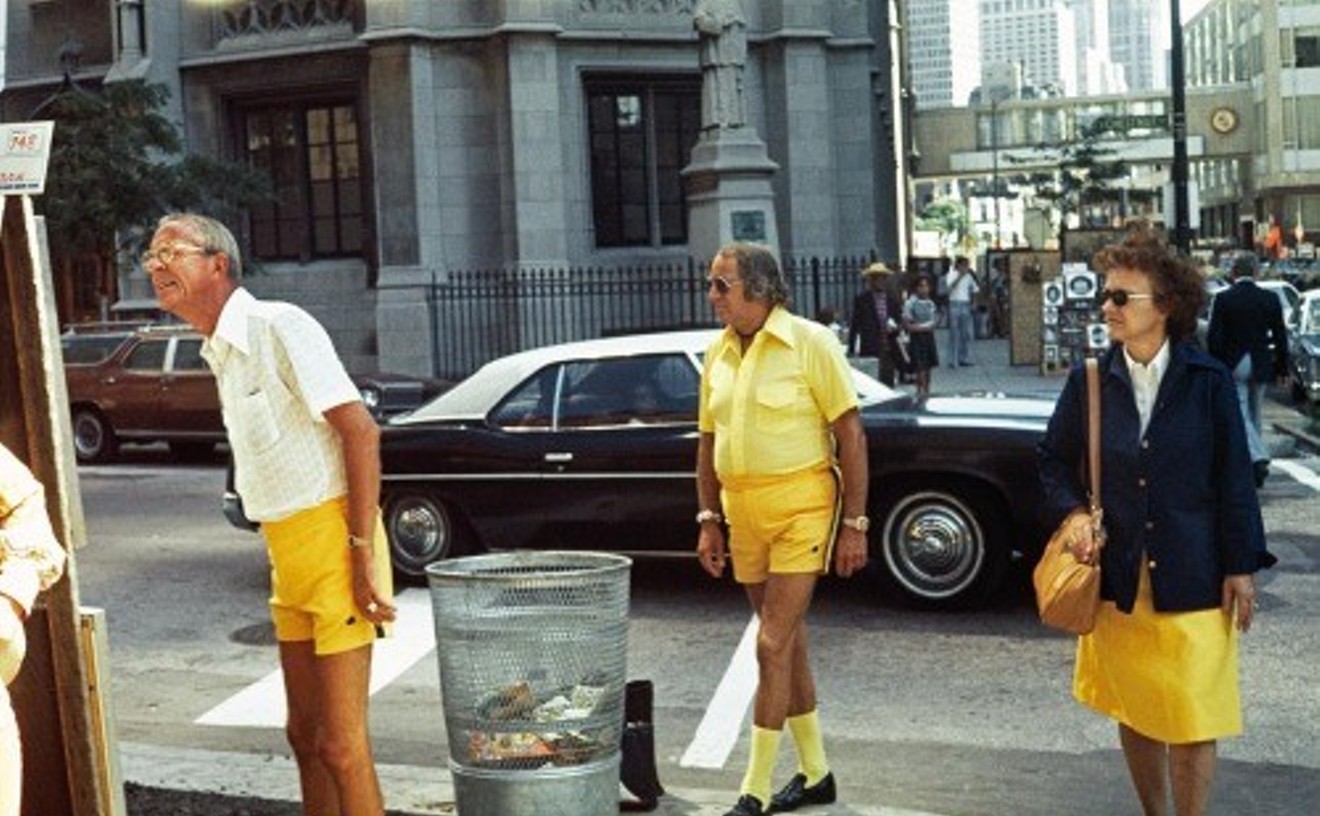 The Houston Cinema Arts Society brings Bayou City cinephiles a variety of programming all year long in the form of screenings, concerts and fancy multimedia events like the annual JULYDOSCOPE gala, but all that is still preamble to the Houston Cinema Arts Festival. For several days in November (9 to 13 this year), Houston's movie houses come alive with more than 50 films, plus video installations, "Meet the Makers" interviews, workshops and frequent celebrity sightings; guests across HCAF's decade-long run include Richard Linklater, Shirley MacLaine and Robert Redford. Besides globe-spanning documentaries, special anniversary screenings or sneak peeks at prestige Hollywood fare — last year's HCAF gave Houston audiences their first taste of Jackie and Best Picture near-miss La La Land — the festival curates its bill of fare with a keen eye toward regional interest, which could be a local premiere (Honky Tonk Heaven, about Austin's storied Broken Spoke) or the annual CineSpace competition that invites aspiring filmmakers to cut together a ten-minute short from existing NASA footage. 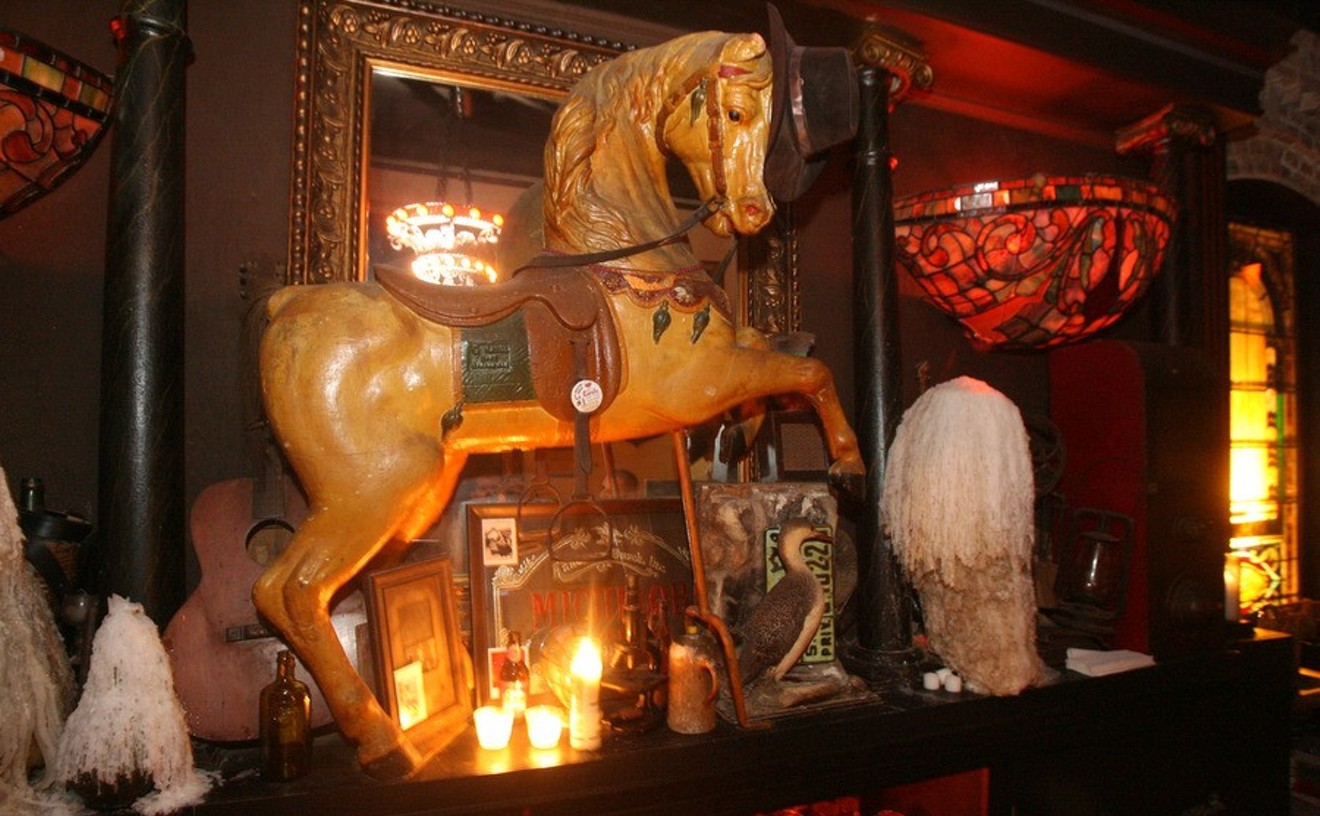 While anybody can open a wine bar, few can do so in a way that leaves you remembering the way the candlelight flickered and how the music seemed to sway right through you after that third glass the way La Carafe can. Why? Well, it's all about the atmosphere. Of course, La Carafe knows how to offer up fine glasses of vino, but when you step into the bar, the former site of a Wells Fargo Pony Express and one of the oldest commercial buildings in Houston, everything about the place — from the guttering candles that light the room to the sounds of Billie Holiday and Edith Piaf emanating from the jukebox to the cheery ding of the gleaming ancient cash register — coaxes you to sit down, settle in and enjoy the glass of wine in your hand. You might find a broader selection at other establishments and you could find yourself spitting and swishing and sniffing with the best of them at some wine bars, but for a glass of red that you will never forget, La Carafe has you covered. (Also, rumor has it the place even has its very own ghost.) 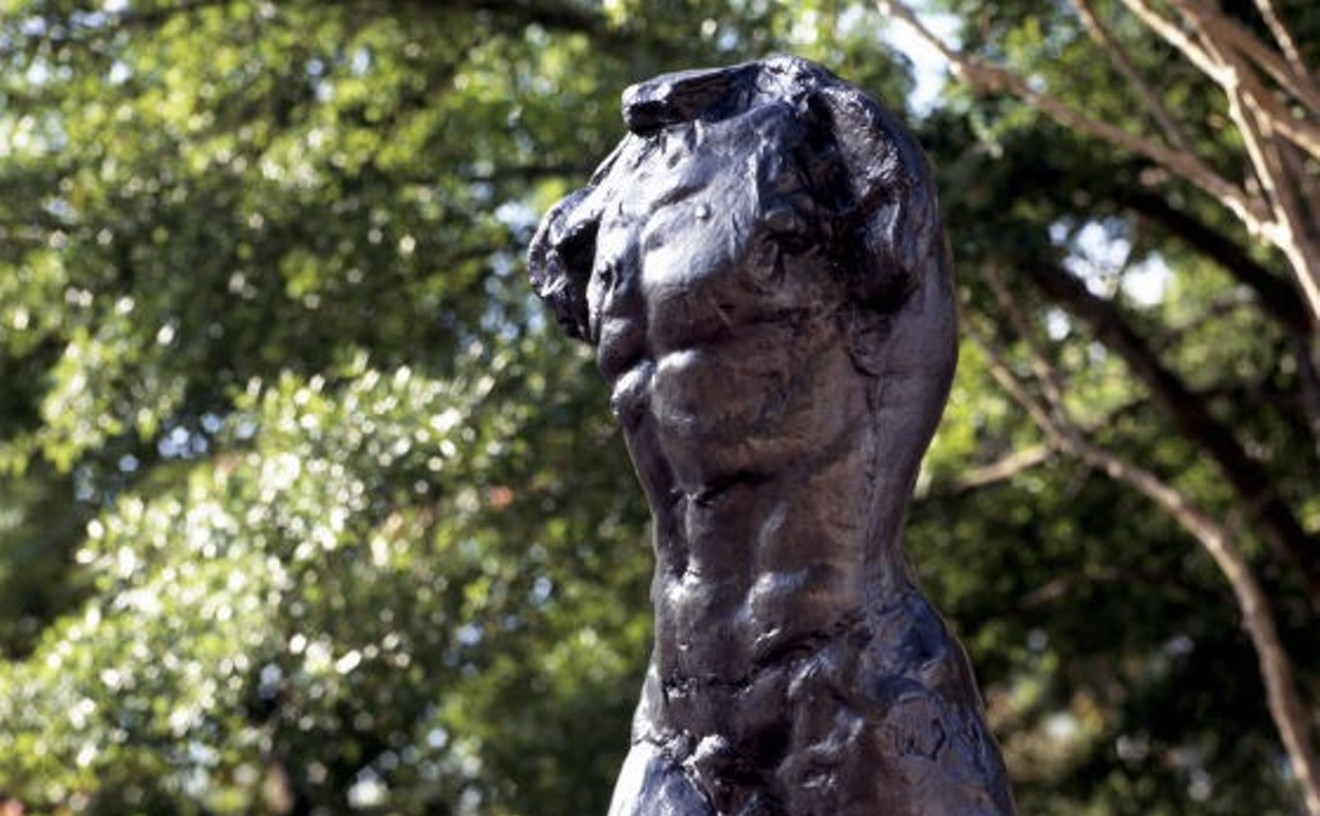 An extension of the Museum of Fine Arts, the Cullen Sculpture Garden offers a collection of mostly bronze sculptures ranging from the early 20th to early 21st centuries. Find eight Auguste Rodin statues of nude — and sometimes headless — men and women in various states of distress or repose interspersed throughout the park. Four Henri Matisse bronze sculptures of nude backsides are mounted to the towering concrete walls that frame the garden. And the garden includes various abstract sculptures, such as Joseph Havel's "Exhaling Pearls" and Joel Shapiro's untitled boxy, vertical figure that looks like a person made of bronze rectangles, getting ready to kick a soccer ball. The park, which is free to visit, is open until 10 p.m., and at night, strings of dim yellow lightbulbs decorate the tree-lined brick pathways.

Matchbox 4 at The MATCH 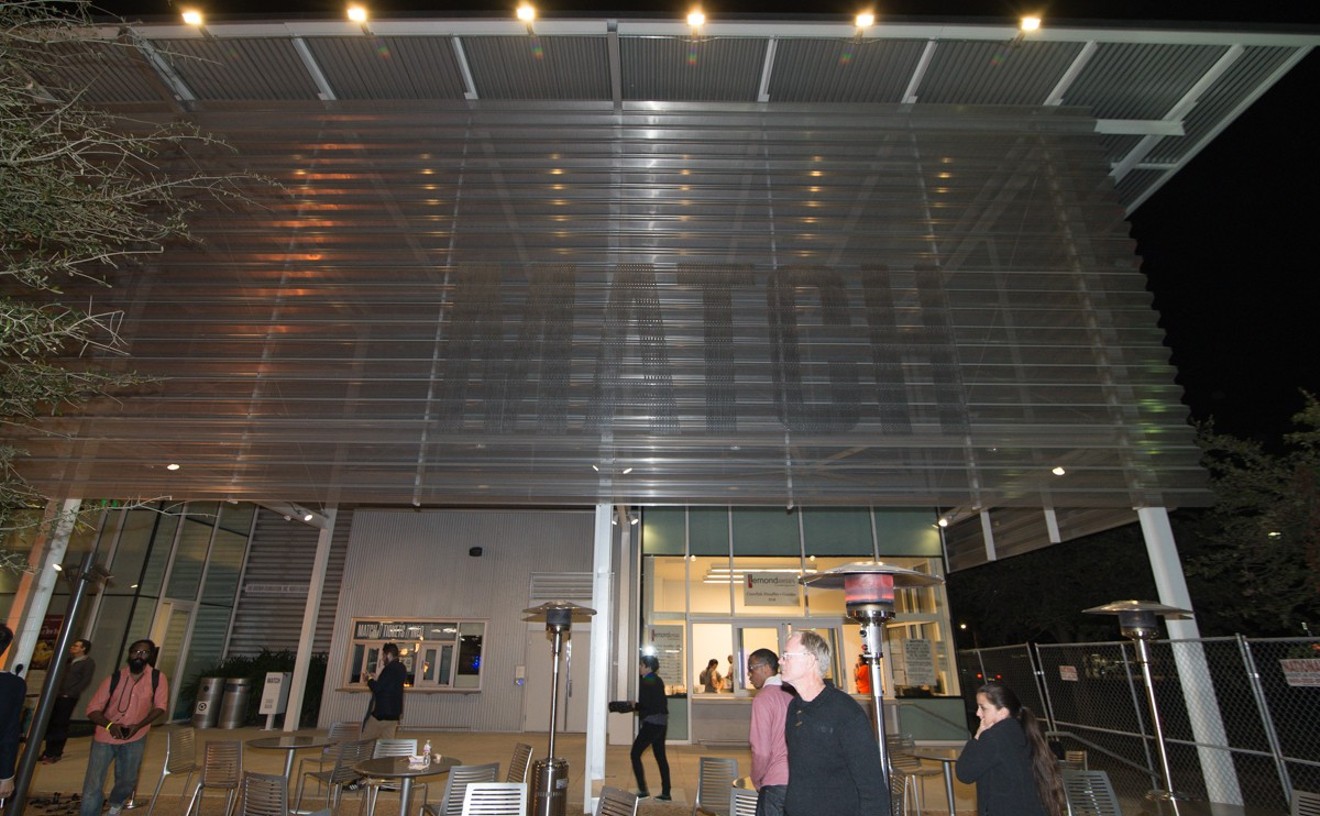 One night there might be a live band accompanying Alfred Hitchcock's 1927 silent film The Lodger: A Story of the London Fog. On another, the National Tap Dance Day Celebration might have taken over the modern space. Then, during some other evening, there's classical music by the Apollo Chamber Players or White Oak Trio. The Midtown Arts and Theater Center has four "matchboxes" available for rent for small performing arts organizations that might not have the resources to run their own venue, and each ranges in size, versatility and charm. It's hard to choose one over another — it's just that Matchbox 4 happens to boast some of the best acoustics in town, a perk that was hammered home during the H-Town debut of Australian improvised jazz trio The Necks. The space's swaths of blue and gray and the cushy seats helped too. For more than two decades, Rockefeller's was the Tiffany's of Houston live-music venues, a nicely appointed former bank that hosted immortals like John Lee Hooker, up-and-comers like Garth Brooks and, regularly, Texas heroes like Joe Ely and Stevie Ray Vaughan. Its high ceilings and balcony ringing the stage fostered an intimate atmosphere that made it feel like the crowd was right on top of the performers; tales of legendary shows under the "R" are legion. As smaller rooms grew less attractive to bigger artists, the owners of Star Pizza bought Rockefeller's and turned it into a wedding/private-event space for hire. But without a whole lot of fanfare, the owners changed course; Rudyard's alum Mike Sims has been booking shows there for coming up on a year now. In favor of high-priced touring talent, though, these days the calendar is full of regional favorites (Hamilton Loomis, Moses Guest) and plenty of veteran locals (Spain Colored Orange, The Mighty Orq, Journey Agents). The club's unexpected and welcome return fills a hole in Houston's music scene many fans barely knew was there.