Putting The G In LGBT: Clay and Thain Allen Double Up On Pride 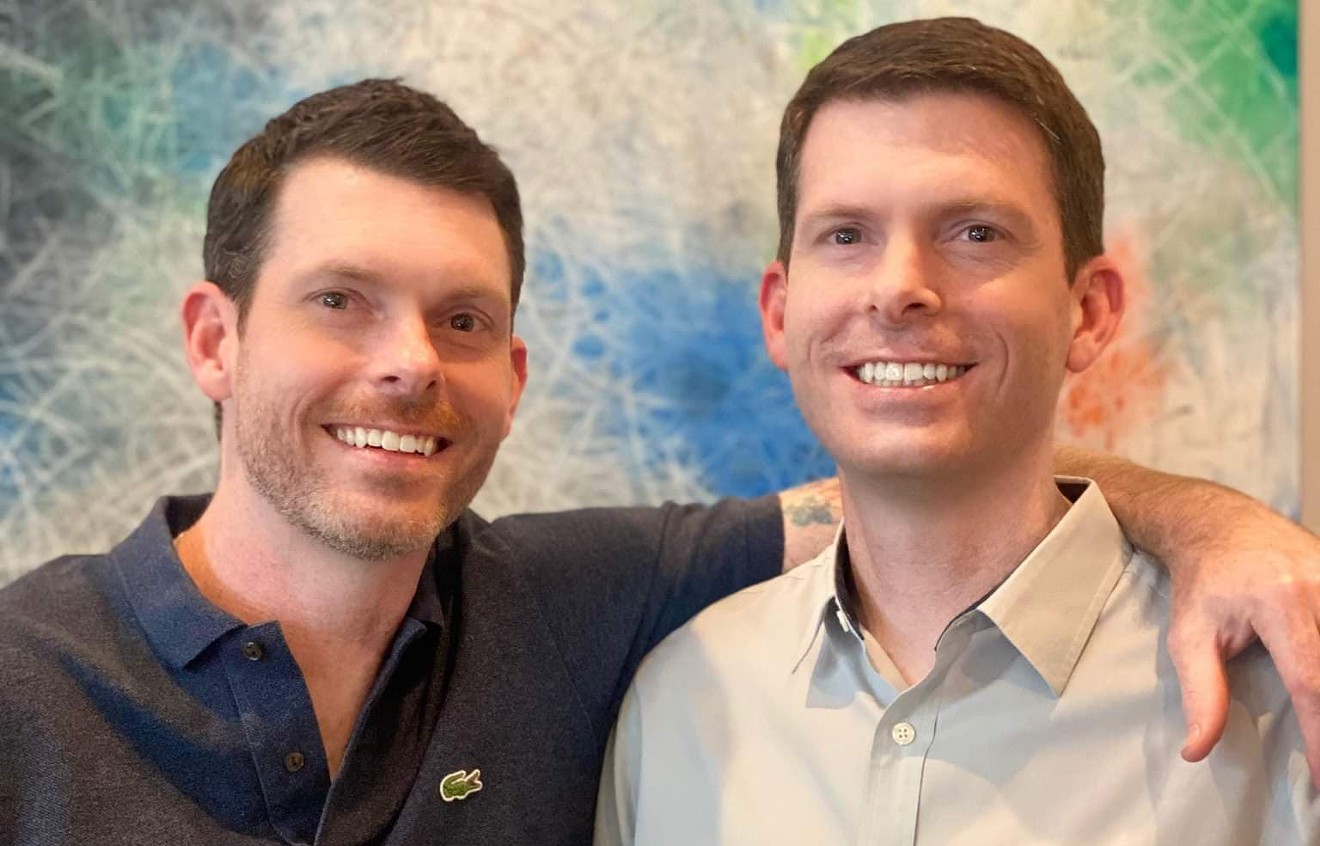 Thain and Clay Allen are twins with more in common than just their looks. Photo by Liza Happel
June is the anniversary of the Stonewall riots, often regarded as the tipping point in the modern gay rights movement and earning its recognition as Pride Month. Houston Press met with members of the LGBTQ community to learn more about their experiences belonging to this group. These are their stories.

Being a twin can be sometimes fun, other times pesky. People sometimes confuse one for the other, yet the wardrobe is automatically doubled. They might view each other as their greatest competitor, or they might find their greatest supporter in the other. But what happens when one twin comes out of the closet and the other doesn't? Thanks to the experience of Clay and Thain Allen, we're one step closer to understanding that question...or at least their experience on the matter.

Thain, the older of the two by seven minutes, decided to live his truth and came out of the closet as gay.

"I probably realized I was gay at some point in high school. In college, it was very clear. I started dating my now husband Jack my sophomore year at Trinity College in San Antonio. Clay and I were roommates, and we shared a bathroom in college with our suitemates, and Jack was one of them. Jack and I dated in secret, and then he started to come out during his senior year of college. The first year out of college, he was fully out. After graduation, we were together, but he stayed in Austin and I came back to Houston. We did the long distance thing, but I was still in the closet. I had told a couple of friends, and I came out officially at 23. I told my family and Clay," Thain described.

When Thain broke the news to his mom, she showed instant support. The twins' father and step-mother proved to be more of a challenge.

"Within a day or two of coming out to my mom, I told Clay and our other siblings, and I eventually told my dad. It didn’t go quite as well. He’s from a small town and was raised Southern Baptist. It was a lot for him to wrap his mind around. We went a few months where we didn’t talk, not because he disowned me but because he wanted to figure it out. He eventually came around and said he loved me but he’s not sure he accepted this. He and our step-mother progressed over the years. Our dad passed away a few years ago. By the end, he was very supportive. He would get mad if I didn’t bring Jack to our family gatherings."

Thain and Jack eventually bought a house at 25, got married at 26 when same-sex marriage laws were still rocky — which was attended by Thain's father — and they eventually married legally five years ago.

For Clay, though, Thain's newly revealed sexuality put him in a precarious spot. After Thain came out of the closet, people assumed Thain was the gay twin and Clay was the straight twin. Yet, that was not quite the case.

"I had an idea in middle school that I might be gay, and by high school, I knew. By the time Thain came out, I hadn’t even experimented with guys before, so I wasn’t ready to come out. To an extent, that pushed me further into the closet because now we had the gay twin and straight twin assumption. I was working for the Rockets doing events and promotions on nights and weekends, so I fell back on 'I’m too busy to date anybody.' Nobody really asked me if I was gay. Then, I decided to go to law school at Baylor University, so then it became 'I'm focusing on my studies.' About a year or two after graduating from law school, close friends started to ask me if I’m gay. I figured if I’m going to tell a few people, I need to tell everyone," Clay said.

That's when Clay seized the moment and burst through the closet door...ten years after his brother did. And Clay did it in a way so befitting of modern times. He made his announcement on Facebook.

"Thain is the more outgoing of the two of us. To me, going to everyone I know and telling them I’m gay and having a heartfelt moment with tears…I’m not interested in that at all. I hadn’t even told Thain yet. I knew this was going to be upsetting to some people. My compromise was not to tell everyone in person, but I had a select few family and close friends who I sent an email to a week before I came out on a Facebook post. Then, the Facebook post was lengthy and talked about what I was going through. People think I’m crazy to do that, but I think it was a great idea. I received so many great responses that I created a folder where I keep all the supportive emails. If I’m having a rough day, I can pull up that folder and find all the responses from when I officially came out. There wasn’t a single negative comment. It worked out perfectly for me." 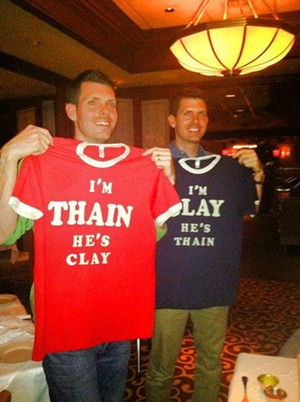 Just in case you need a little help telling them apart.
Photo by Liza Happel
Clay's confidence to come out of the closet was built, in part, through the relationships he had built through sports. Clay and Thain both played volleyball in college, and when they heard about a local club named the Lone Star Volleyball Association (LSVA), they decided to join. Founded in 1988, LSVA has offered a safe space for LGBTQ adults and allies to gather and show their appreciation for indoor volleyball. The organization strives to provide a fun and competitive community of athletes within the greater Houston area.

Clay said, "Before joining LSVA, I didn't know a ton of gay people. When we learned about LSVA, we thought it would be a great chance to get involved in volleyball again. I also made a lot of great friends through LSVA. My social circle right now is formed through volleyball. It helped me with the coming out process, and it’s become a big part of my social life as well."

They are equally as successful in their careers as they are on the court. And they're openly gay in their workplaces, too. Thain has worked with Vacations To Go for 20 years and is the Vice President of Human Resources.

"A few years into working for Vacations To Go, we had a holiday party, and I wanted to bring Jack. I had a close relationship with our CFO, and I told her that I’m gay and I want to bring my partner, but I don’t want to make anyone uncomfortable. She talked to the owner, who then talked to me. He wanted me to bring Jack, and he wanted to meet him, and it was very positive," Thain added. "We have LGBTQ employees from all walks of life including a few transgender coworkers. It’s a nice feeling to give careers to people I know are more marginalized that I am as a white, cisgender male. It’s been nice to see them flourish."

Clay recently received a job promotion that elevated him to a rarified position - an openly gay man in sports - as General Counsel for the Houston Rockets.

"To me, being out at work is particularly important. In men’s sports there isn’t an out player, but we know there are gay players because they come out after they retire. I don’t play sports professionally, but I do work for a professional sports team. I hope athletes, senior leadership, and people who enjoy watching sports see that it’s okay to be gay. I take pride in being one of the few out sports professionals," Clay said.

With both so successful in their careers and personal lives as openly gay men, Pride Month marks the time of year when many others get to embrace that same feeling they have of acceptance.

"I’m super social and love to go out. For Pride, everyone is in such a joyous mood. You get to see people outside the community who support the LGBTQ community, whether its at the parade or just wearing a pride shirt. I think it’s cool to see businesses support LGBTQ people. It’s moment when everyone comes together," Thain added.
KEEP THE HOUSTON PRESS FREE... Since we started the Houston Press, it has been defined as the free, independent voice of Houston, and we'd like to keep it that way. With local media under siege, it's more important than ever for us to rally support behind funding our local journalism. You can help by participating in our "I Support" program, allowing us to keep offering readers access to our incisive coverage of local news, food and culture with no paywalls.
Make a one-time donation today for as little as $1.