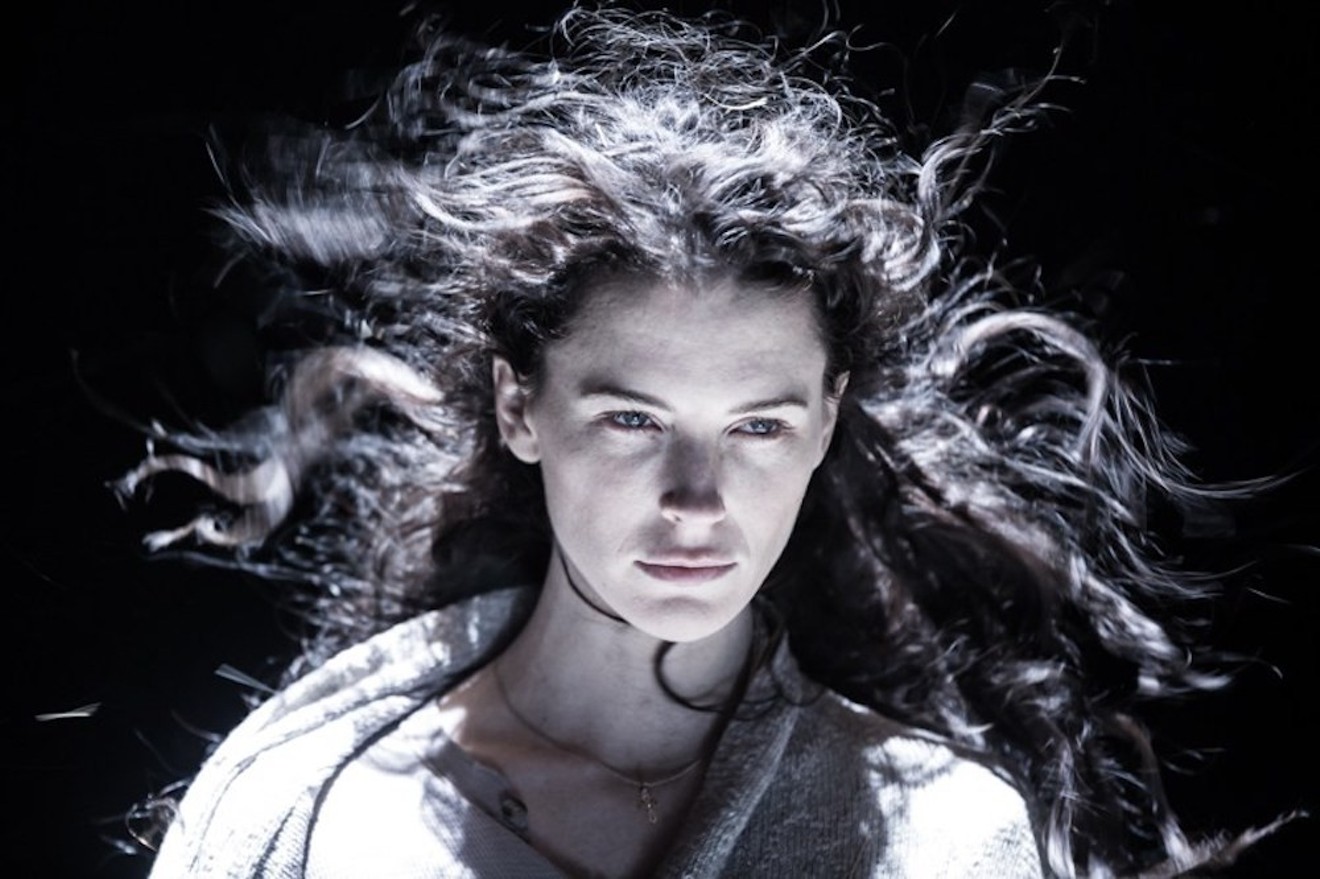 Bridget Regan appears in a scene from Devil’s Gate, Clay Staub’s directorial debut that is a slick horror/sci-fi flick with gorgeous cinematography but not a compelling enough story. Courtesy IFC Midnight
Clay Staub’s directorial debut Devil’s Gate is a slick horror/sci-fi flick that, from the first scene, demonstrates with its gorgeous cinematography that you’re in competent hands. Puffy, low-hanging clouds pack the pale-blue sky and frame a sepia landscape, where a vintage sports car barrels down a long, flat, barren country road toward a seemingly abandoned farmhouse. The film remains beautifully shot throughout, and the special effects soon match the photography's grandeur, but what follows that first scene is a hodgepodge of genre-film tropes — a hard-nosed FBI agent challenging the local police, an outsider lunatic defending his home, religious sacrifices and even alien invasions — that make it seem as though Staub and co-writer Peter Aperlo were reaching for 10 Cloverfield Lane or Devil but came up empty when crafting their own twists and turns. Great setup; no payoff.

Milo Ventimiglia of This Is Us fame plays Jackson Pritchard, a mysterious, dimwitted yokel who inhabits that country house from the first scene. His wife and child have disappeared, and FBI agent Daria Francis (Amanda Schull) comes to town to school the local police, including Colt (Shawn Ashmore) and Sheriff Gruenwell, who’s played by the perfectly paternally condescending Jonathan Frakes, aka Star Trek’s William T. Riker.

When Frakes came on the screen, I almost pumped my fist — you don’t cast the Starfleet’s first officer in a film that isn’t self-aware and attempting to subvert genre expectations. And Frakes brings some welcome lightness/creepiness to the story. His character cracks down-home jokes at Special Agent Francis’ expense and offers a strangely stern warning to her that she must not go out to Pritchard’s house — even if all the evidence seems to indicate that Pritchard may have murdered his wife and child. That seems promising: Oooh! What does the town sheriff know that we don’t? But the moment Frakes leaves the screen, Staub plays everything with a high seriousness at odds with the story’s increasing wackiness. There’s just no fun.

In a cardinal sin of genre filmmaking, Staub also lets his audience figure out the twists before his characters do, all while he over-explains the plot. Francis is an Agent Scully-skeptic type, who, even when faced with firsthand evidence, frustratingly cannot and will not believe in the supernatural or otherworldly she finds in the house. She encounters a creature in the basement and — despite any and all evidence to the contrary — thinks it’s an animal experiment gone wrong, as though the doltish Pritchard is somehow capable of mad-doctoring in the middle of nowhere.

Staub might have sold Francis’ stubborn skepticism for much longer if he’d focused on building any of these characters’ backstories or inner lives. There are attempts. When we meet Francis, she curtly dismisses the offer of a burger in town because she’s vegan. But an hour and a half later, that’s still all that we know about her personally: She’s vegan. Why does she choose not to believe? Why does she have such disdain for local police? We’ll never know. It’d be great to see her thinking through all of this onscreen, but the story is too busy surging on to the next plot point. What’s most disappointing is that Staub proves himself to be a formidable director of action and visual effects. Please, someone just give him a better story.
KEEP THE HOUSTON PRESS FREE... Since we started the Houston Press, it has been defined as the free, independent voice of Houston, and we'd like to keep it that way. With local media under siege, it's more important than ever for us to rally support behind funding our local journalism. You can help by participating in our "I Support" program, allowing us to keep offering readers access to our incisive coverage of local news, food and culture with no paywalls.
Make a one-time donation today for as little as $1.