Here’s All the TV to Cling to This February 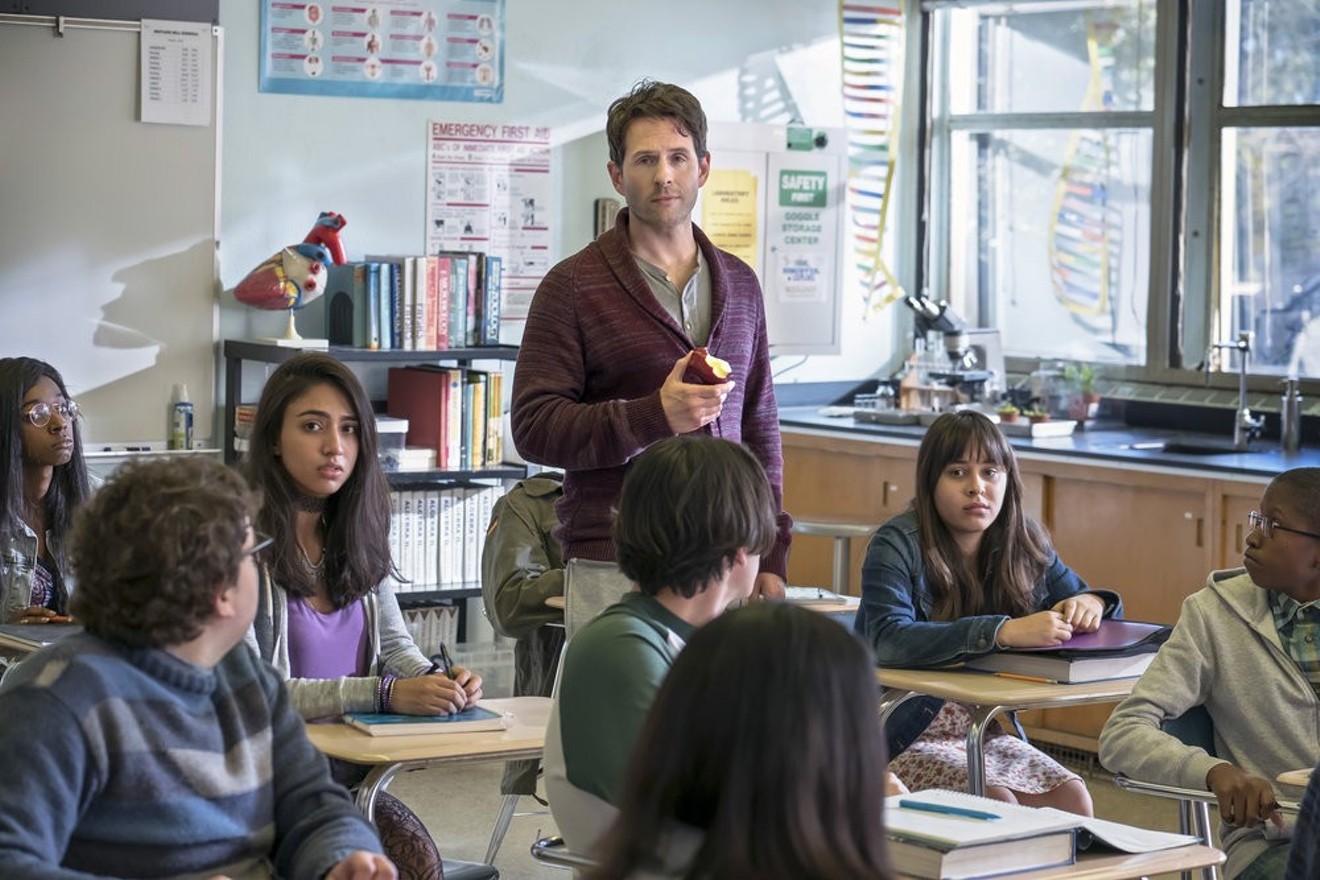 Glenn Howerton (middle), one of the cast members of It’s Always Sunny in Philadelphia, stars in NBC's A.P. Bio, the story of a disgraced Harvard philosophy scholar who becomes a high school biology teacher after losing out on his dream job. Ron Batzdorff/Courtesy of NBC
The Winter Olympics are in February, so even though I’m skipping figure skating — because seriously fuck all those creeps who profit off the abuse and commodification of young women’s bodies! — I’ll still probably watch the weirder shit like biathlon and curling, because I love competition as long as it’s low stakes and I don’t know enough about anyone participating to pick a favorite. Other than that, I’m Time’s Up-invigorated and ready to BURN IT ALL DOWN, so please take all my recommendations with a grain of salt, because if it stars a white man, I’d like to see it in the garbage can. (Also, Time’s Up on me not rhyming!)

A.P. Bio, Feb. 1, NBC
It’s the story of a disgraced egomaniac white guy who gets stuck teaching instead of being a star. This must be a wish-fulfillment fantasy for a lot of white guy Hollywood execs because there’s lots of shows in this vein, most notably, Eastbound & Down. That’s a great show, don’t get me wrong, but I wonder how many “bad boys getting stuck with kids as punishment” plot lines we must endure before Satan rises from below and ushers us to a better place. Anyway, this one stars It’s Always Sunny in Philadelphia’s Glenn Howerton. I chuckled through the whole damn trailer, so I’ll give it a chance like the conditioned monkey that I am.

Absentia, Feb. 2, Amazon
An ad featuring Lizzo’s “Good as Hell,” played before the trailer, and it was so good that I just went and watched that song’s video five times before going back to Absentia. I shoulda watched it two more times because the trailer for this 10-episode series is pretty dumb. The show’s about an FBI agent who vanishes while investigating a serial killer. Everyone thinks she’s dead but, na doy, she’s alive and living in a cabin. So, six years have passed and she has zero memory of what happened in the cabin, so you know whatever happened in that cabin was SUPER fucked up and awful! And, honestly, if they show any of it, I’m gonna lose it, because I’m tired of seeing violence against women. I’m over it! You know what would be more interesting? If she spent six years in that cabin and used that time to like cure cancer or write the great American novel or even think of plots for shows that don’t revolve around trauma to women?! Of course, the last one is the hardest, so she should start with the cancer. YA BURNT, HOLLYWOOD!

Altered Carbon, Feb. 2, Netflix
If you took Neo’s penis and turned it into a series, it would be this 10-episode adaptation of Richard Morgan's 2002 sci-fi novel. It’s just SO MALE. The show is set in the 25th century, when human consciousness can be digitized and downloaded into different bodies. Scary! The Killing’s Joel Kinnaman stars as a former warrior who was imprisoned for 500 years in some sort of fancy future coma and reawakened to go solve a murder. My husband just told me that the book has really hard core sex scenes, so maybe this is just romance novels for boys? Just a big ol’ tough guy swingin’ his mammoth d around to bad techno.

2 Dope Queens, Feb. 2, HBO
Comedians Jessica Williams and Phoebe Robinson’s wonderful podcast is turned into a four-part series, which maybe is gonna be even better because we’ll get to see their beautiful faces and enjoy guests like Sarah Jessica Parker and Tituss Burgess. I mean, that’s three dope queens and a dope king right there. Here’s hoping they get Sarah Jessica Parker to explain why she gave Jennifer Hudson that ugly-ass purse in the first movie. You saw that shit, right? Why haven’t we had a tribunal on that? Time’s Up! (Which is a very serious and necessary thing, but if you can’t laugh, what can you do? Crucify Mel Gibson? Ugh, he’d probably like that too much.)

Queer Eye, Feb. 7, Netflix
Queer Eye for the Straight Guy is reborn as a Netflix original, with a new cast, including Gay of Thrones’ Jonathan Van Ness. I love that dude so much that even if this show turns out to be offensive and terrible (because, honestly, the whole premise is, ya know, iffy), I’ll still FF to his parts so I can laugh and laugh and gaze upon his perfect tresses and dream about what our perfect babies would look like. AND YES I KNOW HE’S GAY BUT MAYBE HE STILL WANTS TO MAKE BABIES WITH ME. DAMN.

Here and Now, Feb. 11, HBO
Alan Ball is back and not a moment too late because baby, I missed you! This supernatural dark comedy — I’m not sure that makes sense, but it’s kinda what all of Ball’s shows are (True Blood, Six Feet Under), if you really think about it. Deep thoughts! — is about a "progressive multi-ethnic family" that’s upended when one of the children starts seeing things — it’s not clear what yet, but I hope it’s hella spooky. Already calling it: This show is gonna win all the Emmys and Trump will be impeached. COME ON, NOVEMBER!

This Close, Feb. 14, Sundance
This looks good! A dramedy from writer-creator-stars Shoshannah Stern and Josh Feldman about navigating love and life and doing it all with a disability (they’re both deaf) and basically just trying to survive and thrive in this crazy mixed up world of ours. I feel like I’m not selling it, but the trailer makes it look like Catastrophe meets Parenthood meets Difficult People! Go watch the damn trailer! You’ll see I’m right and then come back and apologize for thinking such mean thoughts about my shitty write-up. 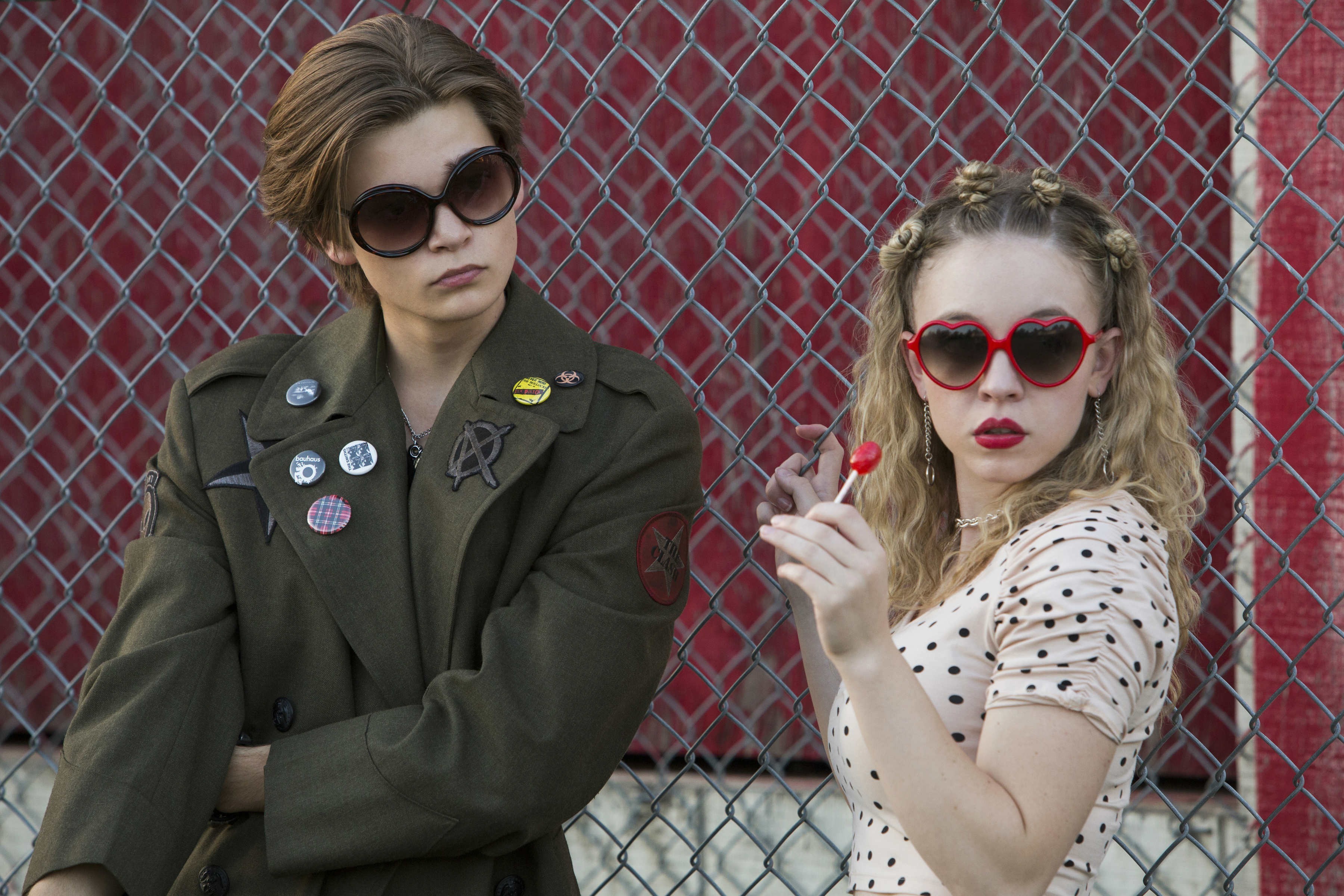 Elijah Stevenson (left) and Sydney Sweeney are two of the cast members in Everything Sucks!, a high school dramatic comedy series on Netflix that shows how teenagers survive boring Oregon in the boring '90s.
Scott Patrick Green/Courtesy of Netflix

Everything Sucks!, Feb. 16, Netflix
This high school dramatic comedy (Ha! I didn’t say dramedy three times in the article and so the ghost of a grumpy editor couldn’t materialize out of the either to eat my laptop!) (Oh shit, never mind, I got an email about it anyway!) examines life in Boring, Oregon, in 1996, which is really just pissing me off, because I could have made a show about how boring 1996 was and instead I just ate cake and stared at a wall last year. FUCK YOU, TRUMP! It’s also frustrating because (almost?) every major creative player involved is a man, and how are you gonna create a show about high school and not get the female perspective? Everyone knows teen girls are the most powerful creatures on Earth and I do not have faith that this show will accurately represent me and my 4 Non Blondes-inspired haircut!!

The Looming Tower, Feb. 28, Hulu
Lawrence Wright's Pulitzer Prize-winning book about Osama bin Laden and 9/11 is a fascinating read, and I’m kiiiiinda curious to see how it translates to TV. The 10-episode series — natch, because that’s the only kind of TV that anyone makes anymore! I miss the days of 153 Friends episodes a season! — stars Tahar Rahim (The Last Panthers), Alec Baldwin, Peter Sarsgaard, Michael Stuhlbarg, Bill Camp, and Jeff Daniels, and you know the showrunners and everyone else involved is a fucking man. Let’s hope they can get through it without being racist AF! You gotta believe in something, right? Oh yeah, wait, I do, I believe in women, fuck this series. JK JK JK byeeeee.

KEEP THE HOUSTON PRESS FREE... Since we started the Houston Press, it has been defined as the free, independent voice of Houston, and we'd like to keep it that way. With local media under siege, it's more important than ever for us to rally support behind funding our local journalism. You can help by participating in our "I Support" program, allowing us to keep offering readers access to our incisive coverage of local news, food and culture with no paywalls.
Make a one-time donation today for as little as $1.
Laura Beck
Contact: Laura Beck