The Betrayal of Dana Scully: The X-Files Has Been Terrible to Its Lead for a Generation 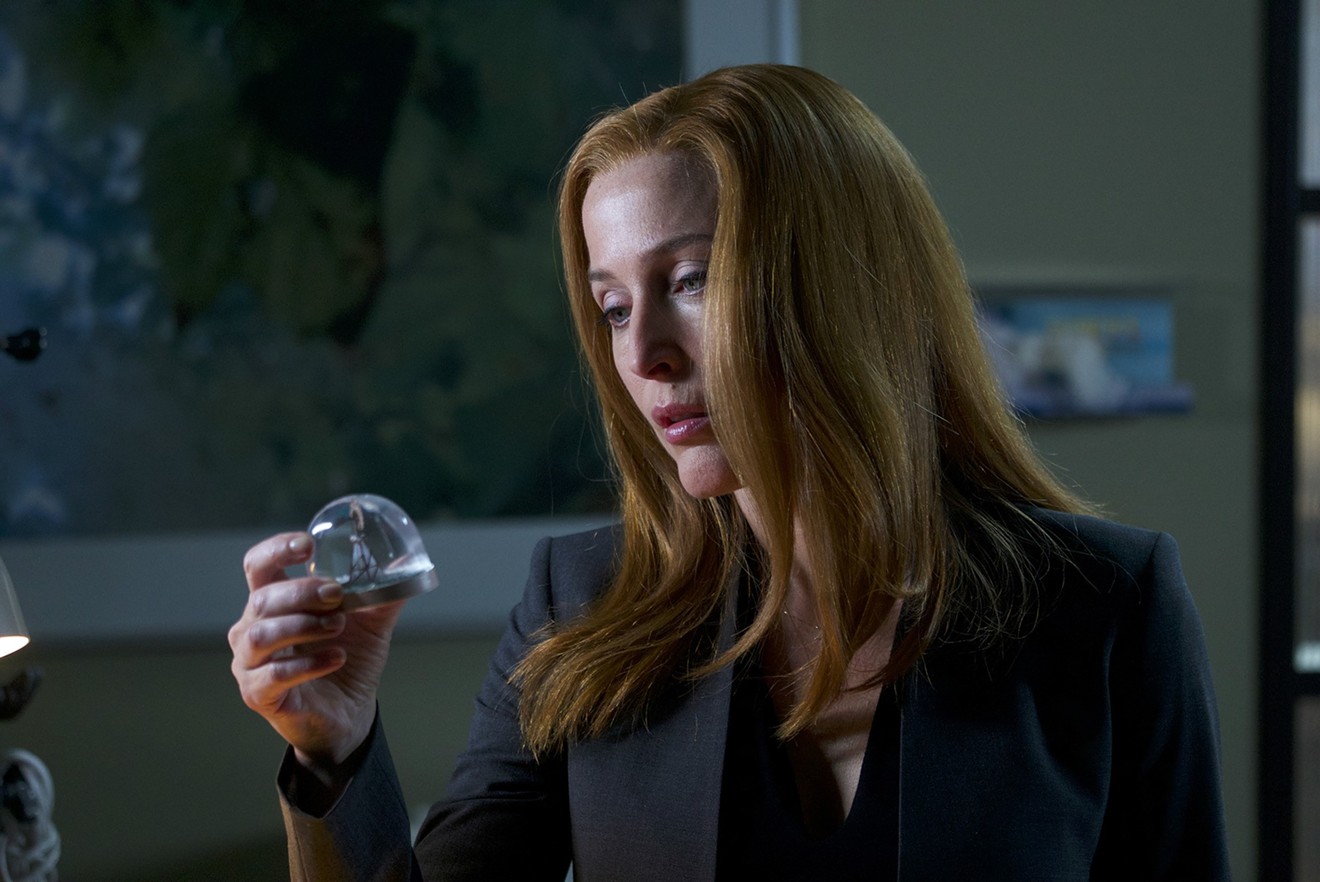 In The X-Files, Gillian Anderson plays Dana Scully, a character created in the '90s who not only was a medical doctor and FBI agent with a degree in physics and a badge from Quantico, but also a brave, badass nerd. Shane Harvey/Courtesy of FOX
The X-Files airs on FOX

Icons become canonized in specific contexts. In the ‘90s — that witchy, spicy, angry, angsty, sarcasm-laden decade when third-wave feminism and girl power took over pop culture — The X-Files’ Dana Scully, played by Gillian Anderson, was still mostly an outlier. A medical doctor and FBI agent with a degree in physics and a badge from Quantico, she was a brave, badass nerd who alternated between thoughtful silence and matter-of-fact polysyllabism. Series creator Chris Carter takes (deserved) credit for fighting for Anderson when network execs wanted a "leggy, blonde, model type" to play against her co-star David Duchovny. Carter’s vision for the gender-flipped dynamic between Fox Mulder and Scully — that of the emotional man and the level-headed woman — obviously resonated during an era when a woman’s strength was largely measured in loud guitars and louder prints. Even Scully’s appearance stood out. In her early dowdy haircuts and frumpy pantsuits, she looked like few other young women on TV, let alone a lead character. Competency porn doesn’t get any more hardcore than Scully.

The first episode of the current season egregiously betrayed that appeal — and unleashed a vociferous backlash. In the final moments of the premiere, it revealed that the child born to Scully in 2001, during the eighth season, was not fathered by her FBI and then-romantic partner Mulder (Duchovny), but instead by the villain she’s been fighting since joining Fox in the basement. Yes, the Cigarette Smoking Man (William B. Davis) had apparently “medically impregnated” Scully while she was passed out in Season 7’s “En Ami” — a creepy-for-the-wrong-reasons hour written by Davis that featured the CSM undressing and possibly drugging the agent — though that wasn’t shown onscreen. Carter, who wrote and directed this season’s premiere, only intensified fan anger by insisting in a morning-after interview that the CSM “didn’t rape Scully” but “impregnated her with science.”

That tone deafness — and Carter’s antiquated notion of rape — shouldn’t surprise any longtime viewers. Sexually traumatizing Scully has always been an integral part of The X-Files.

These are nostalgic times, which means it’s imperative to apply a healthy dose of skepticism to the networks’ backward-looking wish to Make TV Great Again. Just as last year’s Will & Grace revival sparked a debate about the (white, cis, wealth-worshipping) sitcom’s relevance in 2017, it’s worth reconsidering The X-Files’ feminism today, especially when so much of the series’ fan goodwill is based on the quietly political leaps it made in the last century. That’s when it seemed comparatively progressive, and Scully became a pop-feminist icon who may have inspired a generation of girls to pursue careers in science, medicine and law enforcement. And if the show’s gender politics seem stuck in the ‘90s, how badly can a female character be treated by a show’s writers before her halo of inspiring feminism is forever tarnished?

Feminists who found a haven in Scully's stand have had to overlook an awful lot — and a lot of it truly was awful in sexist, if not downright demeaning, ways. Not for nothing is there a TVTropes.org page dedicated to the “Agent Scully” archetype describing characters that champion Occam’s razor to a fault, “even though crazy things happen in episode after episode demonstrating how illogical or otherwise bizarre the universe is.”

Sure, the premise of The X-Files meant that Mulder needed a skeptic to play off of. But it’s impossible to ignore that the show essentially set up a (highly educated) woman to be proven wrong, week after week, year after year. In her most extreme depictions, as on “Syzygy” and the unreliably narrated “Bad Blood,” she’s portrayed as not only the spoilsport to Mulder’s soulful quester, but a nagging scold. In many other episodes, Scully simply became a damsel for Mulder to rescue, or was denied the glimpses of the paranormal that Mulder witnessed via a blow to the head or a lagging speed while running to a scene of a crime. And so the pragmatism that proved so novel and enchanting in the show’s initial years dried up into recalcitrance.

To be clear, this referendum has no bearing on Anderson, who for decades has been a standard-bearer of feminism in Hollywood, a stature bolstered by her recent turn as another steely detective on BBC Two/Netflix’s The Fall. In fact, Anderson may have been suggesting all along that Scully fans take a more critical look at the show’s compromised feminism. In 1998, at the height of X-Files fever, she noted to an interviewer that Mulder was right “98 percent of the time, no, say, 90 percent of the time” and that “the stories still center around his version of things.” (She said this as part of a longer statement about how the characters were “more equal than they ever have been.”)

Anderson has also criticized the stark pay gaps between her and Duchovny (since closed), the early request that she walk several feet behind her male co-star in scenes, and the scarcity of female writers and directors on the series. (As of last summer, only nine of 208 episodes were written by women, and only two directed by women — and Anderson, who has written and directed, counts as one datapoint in each category. The new season boasts a healthier, though not gender-equal, mix.)

Scully was also a Smurfette: in many episodes, the only woman for miles around. That isolation — and the fact that she’s played by a gorgeous actress — meant Scully has endured a lot of comments on her appearance. Even this season, for example, dead conspiracy nut Langley leers at her from the grave through a folder on his computer called “Spank Bank,” which is illustrated (admittedly hilariously) by her somewhat dead-eyed FBI badge photo. If you’re tempted to excuse this treatment as some sop to realism, recall that this is a show where a human-worm hybrid kills people through the toilets of New Jersey. It’s also one that got its then-24-year-old lead actress to strip down to her underwear in the very first episode, under the pretense of Scully showing her new partner some skin anomalies similar to the ones found on recently discovered bodies. Anderson knew what was up then too, noting in the mid ‘90s, “There really wasn't a reason for [the underwear scene]. The bites could have been on my shoulder or something.”

But the most degrading assaults to Scully that the writers have committed are the repeat raids on her reproductive organs and autonomy. As Tasha Robinson argued in her analysis of the “strong female character” trope, in which the screen is populated by physically intimidating but emotionally blank women, depth of characterization is a feminist issue, too. One reason many depictions of rape and sexual assault in pop culture feel cheap and insulting is that we know, in real life, that the pain and sense of violation and non-intactness after assault can linger for a very long time, something episodic TV and especially film often fail to depict. To not portray the long-term fallout of rape implies, in a sense, that sexual assault and bodily invasion aren’t actually all that agonizing, and therefore not that consequential.

The X-Files has checked in only occasionally on Scully’s countless abductions, involuntary ovary removal, diagnoses of terminal cancer and infertility, seeing a daughter she never knew existed die before her eyes and giving up another child she desperately wanted so he won’t become a government medical experiment (please note that this is an extremely impartial list). Ironically, though, it’s actually been halfway respectful to Mulder’s primal trauma. His sister was kidnapped, possibly by aliens, when he was a preteen, and the series has explored in depth how that unsolved crime motivated him as an FBI agent but also made him vulnerable to manipulators who wanted to exploit his heartsickness (cf. “Paper Hearts”).

In contrast, we don’t really know how Scully’s worldview or personality has changed as a result of her recurrent medical rapes. Nor do we know how her trauma has changed her stance toward her work or her relationships or how she deals with the overwhelming loss on a day-to-day basis. Yes, The X-Files is mostly about the cases of the week, but if it didn’t want to deal with the aftereffects of Scully’s trauma, it shouldn’t have traumatized her so frequently. (Meriting its own essay is the show’s now-gross playfulness around consent and the lack thereof, like when a shape-shifter’s attempt to seduce Scully by morphing into Mulder in “Small Potatoes” was largely played for sitcom hijinks.)

In the end, fans see what they want to see. That’s what’s so powerful (and so infuriating) about fandom, whether that means shipping Mulder and Scully, Mulder and Skinner or Mulder and Marcia Brady. (Here’s the link; you’re welcome.) Those who want to continue worshipping Scully as a flame-tressed science goddess with a yawning attitude toward bloody organs slipping off her autopsy scale are free to do so. But it’s also important to remember the past as it was, if only to refrain from giving a pass to on- and allegedly off-screen sexual malfeasance. Sorry, shippers: Anderson finally confirmed one of the worst-kept industry secrets of the ‘90s by admitting a few years ago that she and Duchovny sometimes “hated” each other. And sorry, Scully fans: This former X-Phile thinks Scully was an essential steppingstone in feminist progress on TV, but can no longer stomach how often the series resorts to various forms of sexual assault on its central female character whenever it runs out of ideas, which is far too often.

As for Scully, she's done with it all on March 21. Anderson has announced that this season's finale is the end of The X-Files, because she won't be coming back. Luckily, it’s no longer the ‘90s, so there’s no shortage of feminist heroes on TV — no nostalgia required.

KEEP THE HOUSTON PRESS FREE... Since we started the Houston Press, it has been defined as the free, independent voice of Houston, and we'd like to keep it that way. With local media under siege, it's more important than ever for us to rally support behind funding our local journalism. You can help by participating in our "I Support" program, allowing us to keep offering readers access to our incisive coverage of local news, food and culture with no paywalls.
Make a one-time donation today for as little as $1.
Inkoo Kang is a regular film contributor at Voice Media Group. VMG publications include Denver Westword, Miami New Times, Phoenix New Times, Dallas Observer, Houston Press and New Times Broward-Palm Beach.
Contact: Inkoo Kang