If some of the best jalapeño- and buttermilk-soaked fried chicken in town isn't the ultimate comfort food, we don't know what is. Perhaps it's Gulf Coast oyster-topped wontons, dancing playfully with habanero salsa and garlic aioli, or a roasted red-pepper-laced grilled cheese dipped into a cup of tomato soup. Or how about a rich-as-all-hell veal bolognese lasagna, complete with creamy mascarpone and house-made pasta? We're missing something, aren't we? Oh, yes! The retail-priced beer, wine and champagne to wash it all down. Consider us comforted.

Wouldn't it be great if your favorite food truck was always there when you needed it to be? At Koagie Hots, you can trust that they'll be parked outside of Boondocks late at night when you're totally drunk off your you-know-what and need grub quickly. Like Old Faithful, they'll be there for you from around 8 p.m. to 3 a.m., serving made-to-order cheesesteaks with that house-marinated Korean bulgogi beef. If you want an egg on top, they can deliver that, too, along with your choice of toppings like kimchi or Cheez Whiz. Barbecue pork, tofu and breakfast Koagies are available as well. Don't want a Korean hoagie? Their kimchi fries come to you piping hot, salty and spicy, and easy to share. And their Koagie Dog and Avo Dogs — huge all-beef hot dogs with toppings like a fried egg and Korean barbecue rib eye or avocado and bacon — are seriously delicious. Yep, as far as food trucks go, Koagie Hots is a total winner. 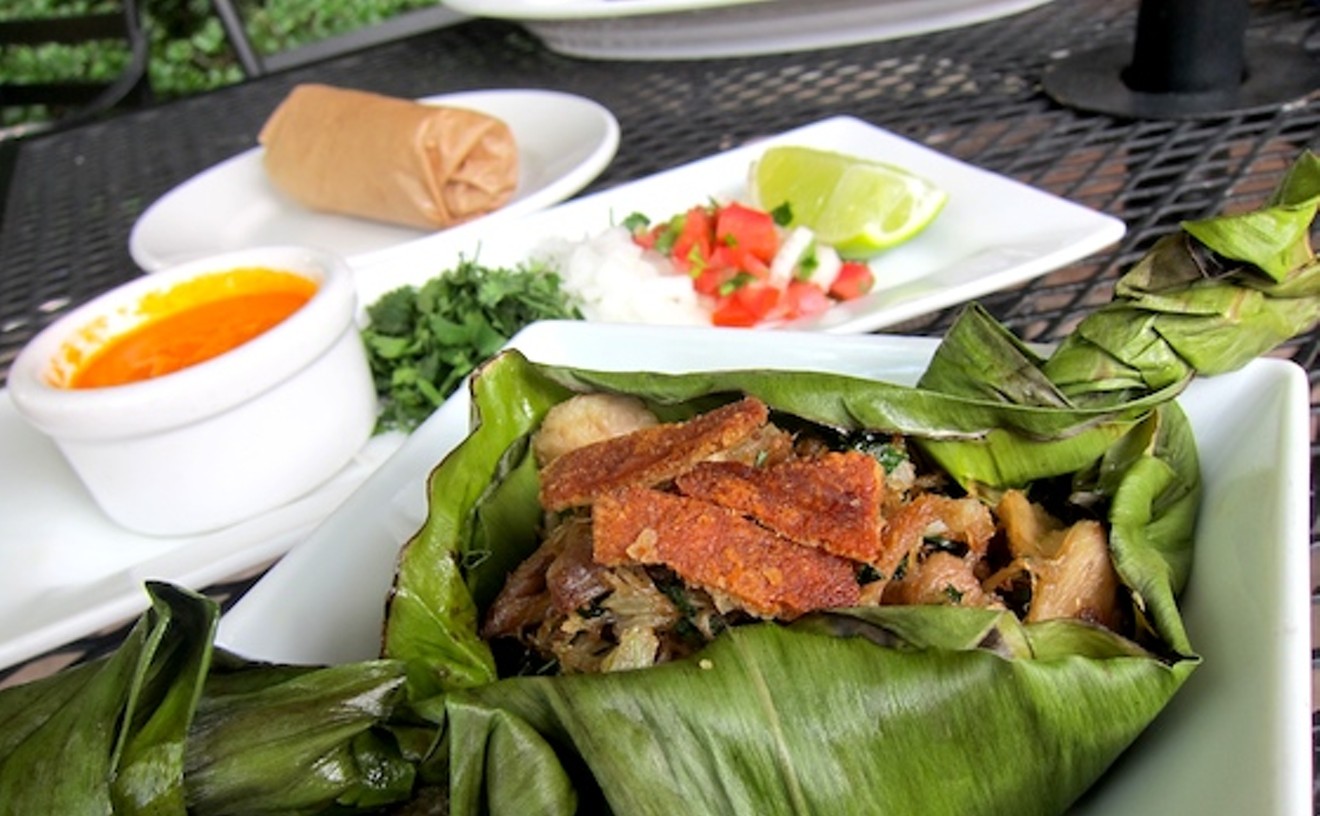 When we talk about Mexican food in Houston, Hugo Ortega is not just one of the most highly regarded pioneers in town, but also the most recognized. For two consecutive years, he has been a semifinalist for the prestigious James Beard Foundation award for Best Chef Southwest. At his eponymous restaurant, the menu is a celebration of the regional cuisines of Mexico — we're talking traditional foods that your Mexican grandmother would make. From mole poblano to pozole verde, roasted suckling pig lechon to octopus, or pulpo, the menu at Hugo's offers a sampling of foods from Puebla, Oaxaca, Veracruz, Guerrero, Michoacan and beyond. The preparations are authentic, the flavors deep and rich with tradition — true Mexican food at its finest.

Liberty Kitchen Oyster Bar may offer a full menu of comfort food that includes burgers and hot dogs and mac and cheese, but the star is definitely the oysters. On the chalkboard menu, you'll find fresh daily selections ranging from Gulf oysters to those flown in from New England. The list changes almost daily, and the quality is superb — beautiful, plump oysters with varying degrees of salinity and creaminess are just a joy to eat. Liberty Kitchen offers both fried and grilled oysters as well. For the best of both worlds, the grilled Gulf oyster with bacon jam, topped with a fried oyster, is insanely delicious.

Best Neighborhood Spot in the Village 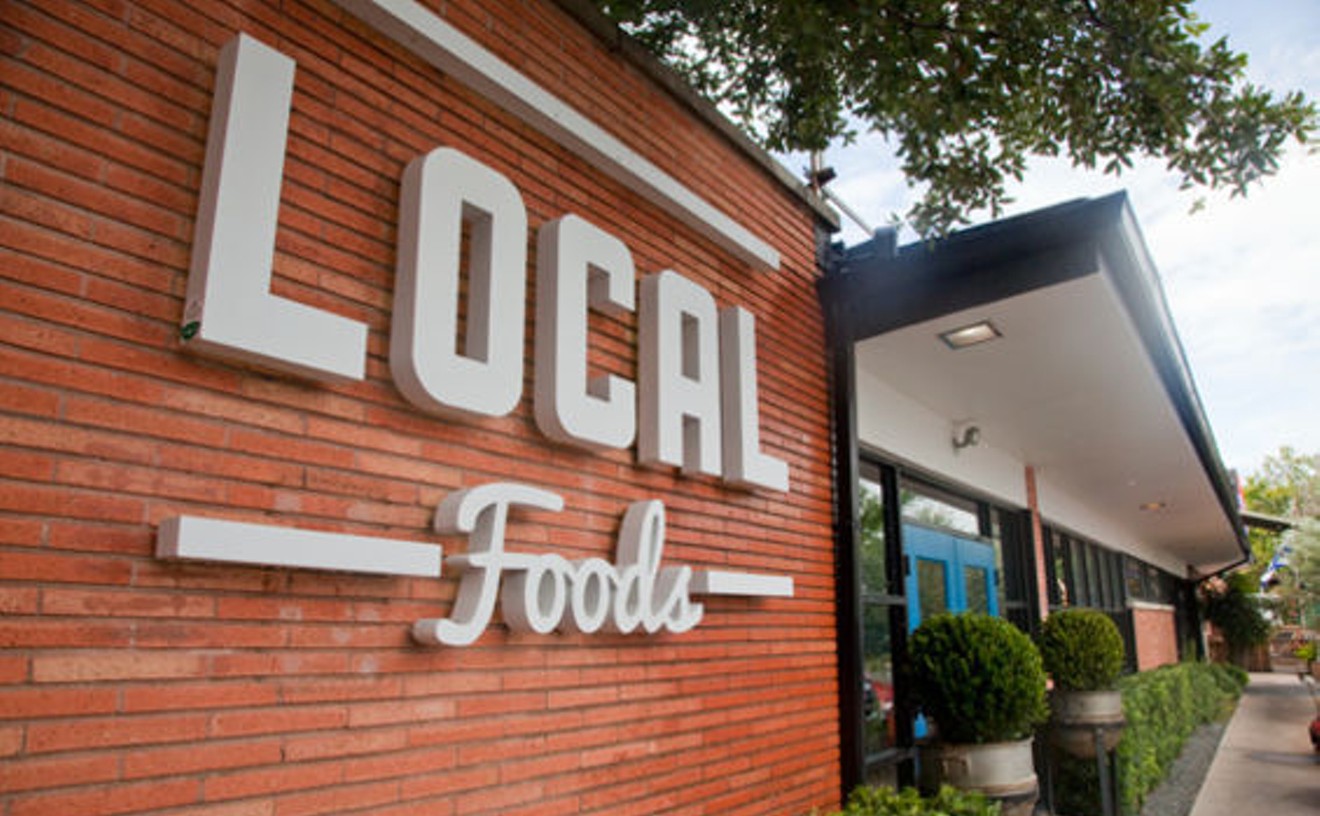 The clientele of Local Foods testifies to its broad appeal: Multigenerational families nosh on house-made chips and sandwiches, graduate students laze over organic soups, and young couples chatter in between sips of lemonade and bits of "Mom's" chocolate cupcakes. Eating local is easy, inexpensive, relaxing and, most important, delicious, thanks to Local Foods, where house specialties include the truffled egg salad on a pretzel roll, smoked salmon with cream cheese and onion jam, and Asian chicken salad. Most dishes come with your choice of side; however, a "side" at Local Foods is hardly an aside, given such creative, colorful options as beets with pistachios, wheat berry and mint as well as Tuscan kale with pine nuts, parmesan and yellow raisins. 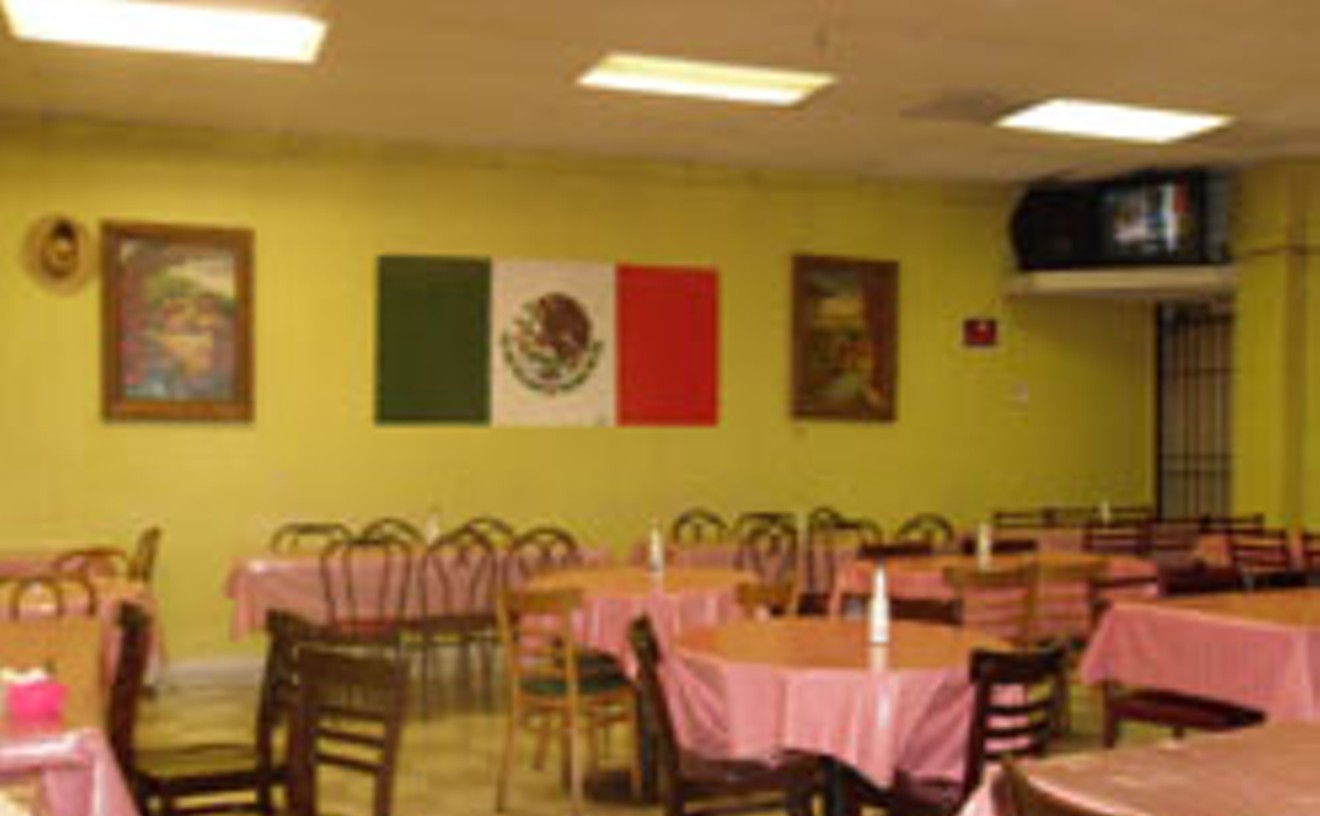 Sooner or later on the journey of Mexican food you're required to travel as a Houstonian, you will want to indulge in cabrito. Beef and pork are king, but eating the meat off a well-prepared and grilled goat will make you dream of being a vaquero in the Mexican countryside, wondering why it took you so long to try this delicious carne asada. At El Hidalguense, accompany your cabrito with flavorful rice, excellent frijoles and hand-made corn tortillas that are the best in the city. This family restaurant welcomes anyone who's ready to appease his appetite with superb Mexican food.

Did you ever hear of the little engine that could? Killen's Steakhouse in Pearland is like that little engine. A total underdog located in a suburb outside Houston, the low-key, humble restaurant has emerged as the de facto best steakhouse in Houston, and it deserves every single accolade it gets. Consider chef and owner Ronnie Killen, who graduated top of his class at the Cordon Bleu in London. With a flair for making meat taste fantastic, he's gone above and beyond to source some of the best meat money can buy. On his menu, you'll find USDA Prime dry-aged beef, Strube Ranch 100% wagyu all-natural grass-fed beef, Broken Arrow Ranch venison and Berkshire pork chops. The 34-ounce dry aged Kobe long bone-in rib eye is some of the best meat you'll ever taste. His sides are famous as well, including a spicy creamed corn that helped him take home the grand prize at the annual Rodeo Best Bites competition. There's also his famous jumbo lump crab cake and his to-die-for bread pudding. Wholly unpretentious, with the goods to back up the title, Killen's totally deserves to be recognized as this year's Best Steakhouse. 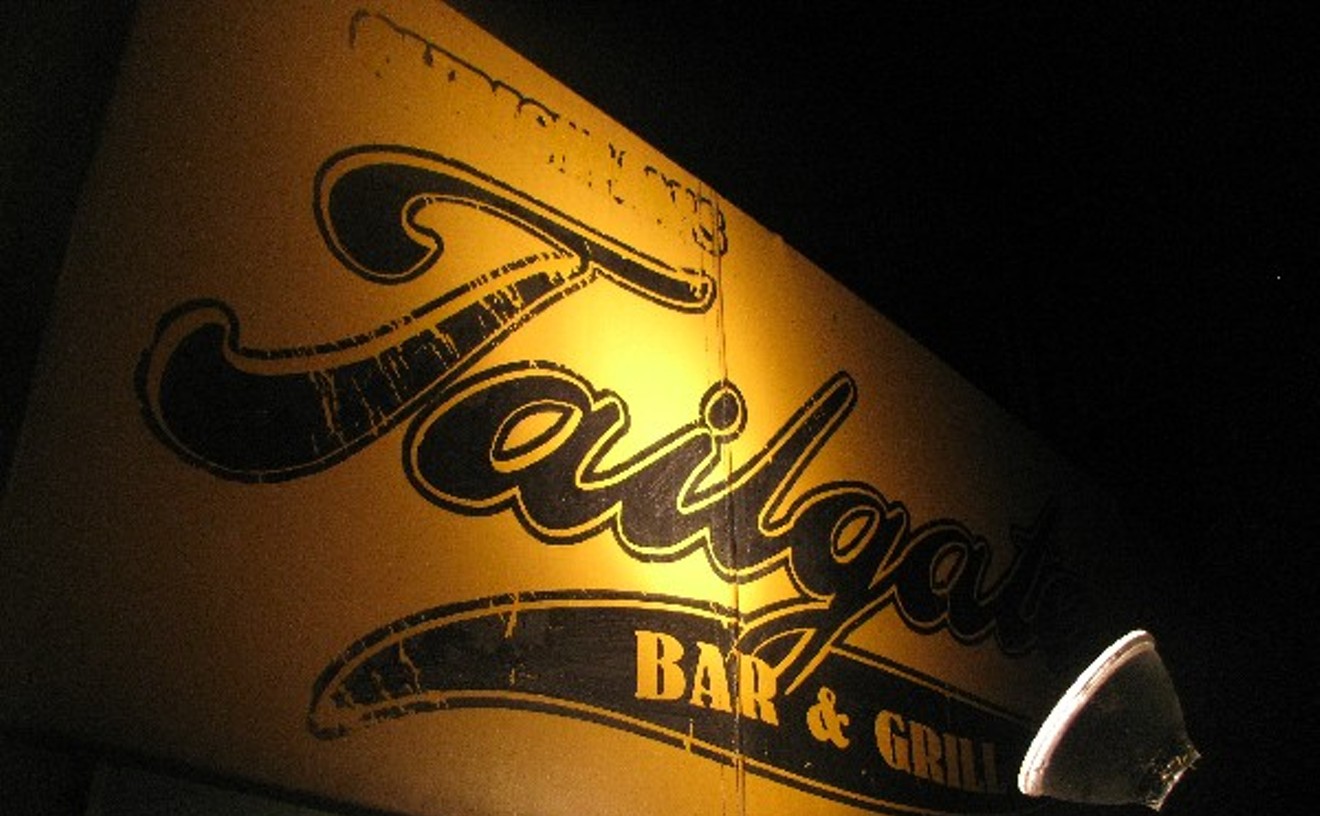 When your server at Christian's Tailgate asks if you want fries or onion rings, there's only one defensible reply. The rings, giant circles of sweet white onion coated with a batter so dense you might think it was savory cookie dough, are deep-fried but never greasy, crisp but not crumbly. And with a luscious oily brown sheen and rich consistency, the rings are also, as you might expect, deliciously distracting. Two-thirds of the way through an order, you may pause and think, "Wait, didn't I come for the burger?" Well, that's what you can tell the folks at home, but we know better.

If the entire restaurant smells like frites, you know you're in for an outstanding Belgian meal. Café Brussels offers all the authentic and classic Belgian dishes, including the best selection of Belgian beers. Whether you're in the mood for mussels and frites paired with flights of wine or beer, or just want a simple croque madame or savory potato, sausage and onion crepe (definitely the best choice), Café Brussels has got you covered. Start any meal — brunch, lunch or dinner — with a warm cup of la soupe à l'oignon au gratin, onion soup au gratin, with stringy, melted cheese covering a delectable, soft baguette slice. The perfectly crispy, salty frites can (and should) be eaten with every dish; you won't be able to stop after just one. Don't forget the tangy housemade mayonnaise, which will seriously rock your world. 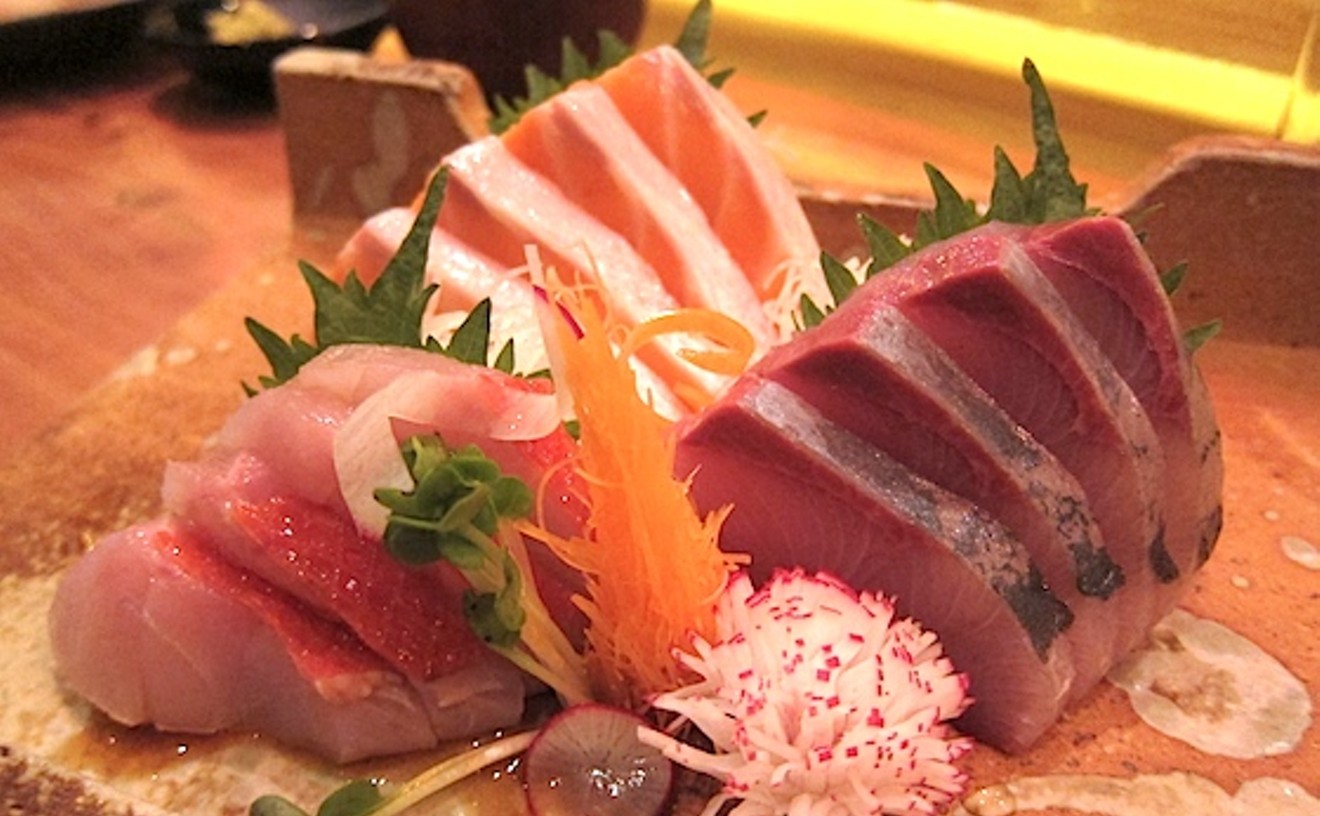 MF Sushi arrived quietly on the Houston food scene. Located in a nondescript strip mall, with nothing more than a modest black awning to signal its presence, it's a place that's easily overlooked. Step inside on a busy Friday or Saturday night, however, and you'll find aficionados taking up every single seat in front of the sushi bar, groaning in food ecstasy at the omakase, or tasting-menu creations, served by chef and owner Chris Kinjo. Sporting spiky hair, black-rimmed glasses and a shiny Gucci cravat beneath his chef's whites, Kinjo, who came to Houston by way of Atlanta, is elevating the standard of sushi served in Houston with exotic fish flown in from Japan's famed Tsukiji fish market. Expert renditions of nigiri and meticulously plated sashimi dishes are his signature, and they're breathtaking. His fish quality is unsurpassed, his sushi rice a thing of beauty. The quality speaks for itself, and it's why patrons are driving outside of their comfort zones inside the Loop to this modest sushi restaurant just outside the Galleria. On September 29, there was a significant fire that closed the restaurant, and the owner reportedly said they were assessing the damage.