The 10 Biggest Houston Sports Stories of 2017

Photo by Gilbert Bernal
World Series champs. It's still hard to believe.
"It was the best of times, it was the worst of times" could describe virtually any year in Houston sports, but perhaps none quite as dramatically as 2017. The thrill of victory and the agony of defeat was in full effect around here. In reality, the good outweighed the bad if only for the brilliance of the Astros. But, these things always seem to come with a price in Houston. Let's look back at the year that was in Houston sports.

Some may forget, but we do have a professional soccer team in Houston. They are young and dynamic, and they went a lot further than most believed they would, bowing out in the second round of the playoffs. In many ways, this team reminds me of the Astros in 2015. They were close to being good, but lacked experience and a little talent. They will be a dangerous team in the MLS in the coming seasons.

9. Rockets with NBA's best record and a 14-game winning streak.

There is nary a mention of the Rockets postseason struggles because, quite frankly, the news from their camp beginning in the offseason has largely overshadowed it. And while they did manage the league's best record for a time, the 14-game winning streak didn't distance them nearly as much as they would have liked. Still, it's an impressive feat for a team many believed would struggle with two "ball dominant" All-Stars in the backcourt.

When it rains, it pours—literally for the city and metaphorically for the Texans. With a defense expected to be one of the NFL's best, they promptly went out and lost two of their three best defenders on the same day in J.J. Watt and Whitney Mercilus. Then came the devastating loss of rookie quarterback Deshaun Watson (more on him in a second), a torn tendon for rookie running back D'Onta Foreman, concussions for seemingly everyone on the roster (most notably their tight ends and Tom Savage) and Will Fuller's series of injury problems. Only a couple of the Texans front-line starters have survived. The season has not. 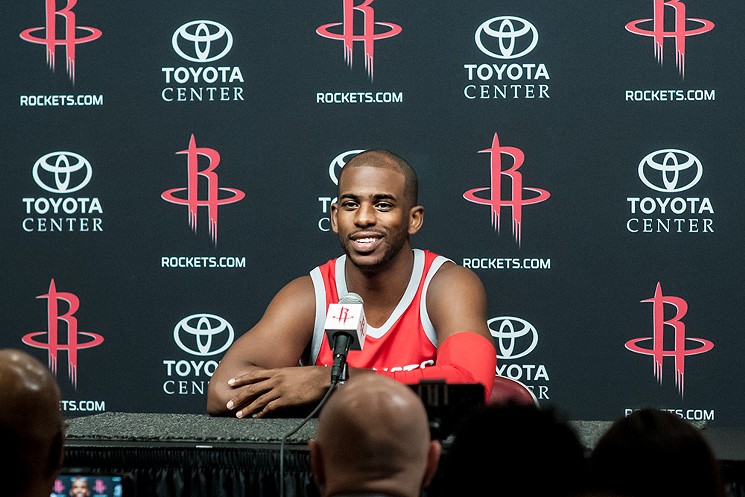 The Rockets went 15-0 in Chris Paul's first 15 games as a Houston Rocket.
Photo by Jeff Balke
6. Chris Paul is acquired by the Rockets.

It was no secret in NBA circles that Chris Paul wanted to pair with James Harden in Houston. The deal that brought him here (which cost the team fan favorite Patrick Beverley) was praised by some but decried by others as a chemistry experiment that would blow up in the team's face. The opposite was true mainly because Paul chose to come here and Harden really wanted it to happen. The ball dominant guards have been nothing short of incredible on the floor, one of the league's best backcourts. Paul went 14 games before the team lost with him in the lineup.

7. Justin Verlander is acquired by the Astros.

There's cutting it close and then there is what happened when the Astros traded for ace pitcher Justin Verlander. The Astros landed Verlander with only two seconds remaining on the final trading deadline of the season. He went on to have one of the most dominant closes to the season in Astro history and a ridiculous postseason that culminated in a title. We literally love this story.

Not since the first pick in the first Texans draft has something been so anticipated, and that includes the selection of Mario Williams over local favorite Vince Young. The Texans traded their first- and second-round picks in 2018 (a slight bummer considering how good they would be) to acquire the Clemson QB, who came in after one half of football and proceeded to wreck all kinds of NFL rookie records. His season was cut short by a torn ACL he suffered in practice, but no one can deny Watson is the future at the QB spot for the Texans. It only took them 15 years to find him.

In some years, this might make the No. 1 spot on the list. Teams change hands so rarely in sports, it is big news when one happens in your city. It's even bigger news when the man who had shepherded the team the last quarter century was arguably the best owner in the city's history. But, when Les Alexander decided to sell, restaurateur and entrepreneur Fertitta seemed the obvious choice from the outset. In what was one of the fastest sales in history, Fertitta landed a home-town team for his portfolio and his family who will likely inherit the team in years to come. For the city, it's a win as a native son takes the reins, someone who has deep enough pockets to keep the Rockets competitive for a long time.

For only the second time in team history, the Astros had an MVP. The first was Jeff Bagwell in the strike-shortened 1994 season. For Altuve, it was a year of dominance at the plate and wizardry in the field. Despite a herculean effort by stellar Yankee rookie Aaron Judge, Altuve was a near unanimous choice as the American League MVP. Even one more year like he has had over the last four and he could cement himself as the greatest player ever to don an Astros uniform, and he's only 27.

It was most definitely a year of firsts and that includes a humanitarian story making one of the top two spots on this list. The effects of Hurricane Harvey and the devastating floods that inundated the city this summer spared no one. Every Houstonian in one way or another dealt with the impacts and nearly all of them stepped up. That included the Texans J.J. Watt, whose simple online fundraising effort turned into a $37 million haul for flood relief. It was an amazing, viral campaign that lead to Watt along with Altuve being named Sports Illustrated Sportsmen of the Year. It was well deserved.

This could be the top sports story in the history of Houston sports. Not only were the Astros a dominant team throughout the year, they proved their mettle against three of the most storied franchises in baseball in the postseason. That included one of the most frenetic and exciting World Series in baseball history against the Dodgers. Game 5 alone may be the greatest game ever played. It was the team's first title and it was filled with guys everyone wanted to root for...and they are all coming back next season.