Waxahatchee Opens Up About The Importance of Being Southern

Photo Courtesy of Ground Control Touring
Katie Crutchfield of Waxahatchee dropped one of the best albums of 2017.
Katie Crutchfield has had no problem proving that she's one of the best new songwriters coming out of the indie rock world. From her pop punk leanings with her and her twin sister's now defunct band P.S. Eliot to the subtle beauty of the 2015 Waxahatchee album Ivy Tripp, Crutchfield has proven herself time and time again. Last year she dropped her strongest release to date with the powerful and strong album Out In The Storm, and elevated her prowess even further. The record, hailed by pretty much every music critic including the Houston Press as one of the best albums of 2017, is a mix of loud rock guitars and beautiful notes all lead by the Alabama native. Ahead of her date in Houston on February 16, the Press was more than thrilled to chat with Crutchfield about growing up in the South, the making of Out In The Storm, and what it's like to be on powerhouse indie label Merge Records.

While the Birmingham native is gaining all sorts of accolades, she and her sister Allison have been performing since they were in their teens. When you grow up with the normal American family background and become a musician as Crutchfield did, it makes you wonder if there was ever a time when her parents weren't too thrilled about either or both of their daughters becoming musicians. "We didn't set out to do it as a profession. Our parents have always supported us, but when we started we were just like everyone else, working our jobs and doing music for fun. They were concerned at first because they didn't see it as a career. But once things started to take off, they supported us one hundred percent," says Crutchfield.


That support would lead to a band they both fronted before breaking up and leaving to front different projects, Allison with Swearin' and Katie with Waxahatchee. On her 2015 release Ivy Tripp, Crutchfield holed up in a house on Long Island to make the record. For Out In The Storm however, she employed producer John Agnello who is best known for his work with Sonic Youth and Dinosaur Jr. Recorded live with her backing band including Katie Harkin best known for her work as additional guitarist for Sleater Kinney. The end result is a loud rock record, something that Crutchfield says wasn't her initial intent when she went to make it. "I didn't go in with the intent to make a big rock record. The songs are visceral and raw, my earliest intentions were open ended. Once I knew my live band, and utilizing John and Katie, it quickly reveled itself. I just had to do the math. I don't think that's the path for me in the future, so I was glad we documented it."

On the deluxe version of Out In The Storm, the demos of all the songs are included. If you listen, you should find that even the demos have a certain ring to them, being pretty much ready to go even in those early formations. When asked if there's a particular process she employs when writing, Crutchfield replies, "it's all the same. It's been the same since I started, that's why the demos sound so finished. Though post this record, I'm diverged." 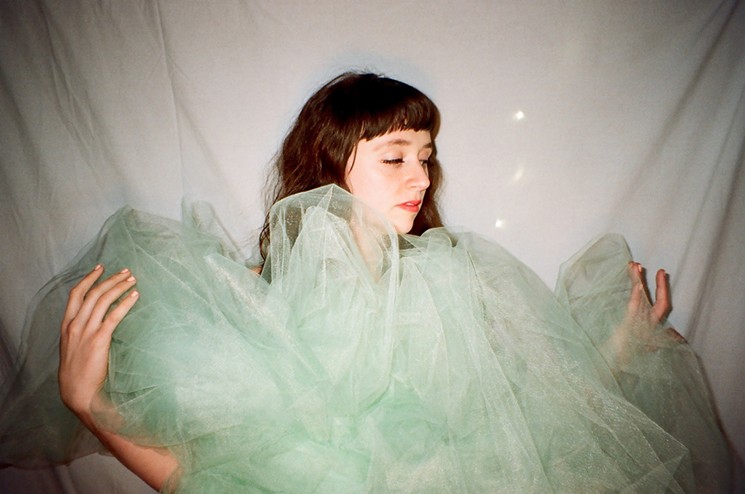 Waxahatchee will bring plenty of joy to all in attendance for her show at Rockefeller's.
Photo by Jesse Riggins
For most people in the know, Crutchfield left Alabama for Philadelphia about seven years ago but has moved back to Birmingham.  "When we (Allison and I) moved, the big reason was because we felt there was a political discrepancy where there weren't our people in the scene. When we toured, we saw more of our kind of people all over. There are so many good people coming out of the South, and if you take the voting out it feels like it's getting better. I just missed it, the South is important to my voice. At my shows in the South and all over the country everyone is cool. In Birmingham, it's gentrification which isn't cool, where now all of these cool spaces exist. But it feels like there are more left leaning people here than there were when we left seven years ago. I feel like with the music of Lucinda Williams, it's the South I know and wish others heard."

With Out In The Storm, her second record for North Carolina label Merge Records, it feels like Crutchfield is in the right place as far as artistry and the label who is releasing her music. "Yeah, it feels like the home with my people. Their story, the D.I.Y. nature to how they employ things paralleled me. Some of my favorite artists like Superchunk, Mountain Goats, and Neutral Milk Hotel are on Merge. There were other offers out there and I held out just for them."

You can stream Out In The Storm as well as all of the catalog from Waxahatchee in all of the usual places, or purchase them directly from Bandcamp or Merge Records. Waxahatchee is set to perform a rare solo set in Houston at Rockefeller's on February 16. The all ages show has a support performance from L.A.'s Night Shop. Doors at 7 p.m.; tickets $16 to $18.