The Great Society Covers the Wounds, Scars and LBJ '60s 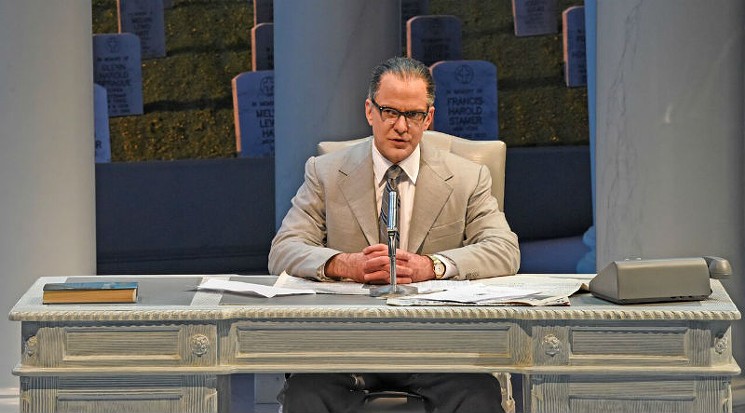 Brandon Potter as LBJ in a signature role.
Photo by Karen Almond
“My fellow Americans, I am Lyndon Baines Johnson, the 36th President of the United States. Baby Boomers ridicule me, having lived through the turbulent '60s during my presidency (1963 – 1968). To Gen-Xers and Millennials I am ancient history. They're much too young to remember, if they even care about me at all. I am fortunate to have Tony-winning playwright Robert Schenkkan (All the Way, the first of the two plays in his “LBJ' cycle) restore a bit of my tarnished honor. He almost succeeds. Unfortunately, I keep getting in his way.”

LBJ was the ultimate politician, tarred with ill and striving for good. He could wheedle, cajole, back stab, and arm twist to get what he wanted. Later, he would wiretap and blackmail to get his way. Scandal and controversy dogged him from his first Senate campaign in 1948, while his brash, some would say vulgar, style earned him enemies and advocates throughout his career. In 1964, when he infamously picked up his pet beagles by their ears in the Rose Garden “just to hear them yelp,” he inevitably lost the vote of countless dog lovers. He wasn't great at photo-ops. Though The Great Society covers the final years of his presidency when he was under assault from all sides, he's softened under Schenkkan's flash-drive run through history.

For all the impressive legislative accomplishes of his presidency – Civil Rights Act (1964), Economic Opportunity Act (1964), Voting Rights Act (1965), Head Start Program (1965), Medicare (1965), Medicaid (1965), Freedom of Information Act (1966), the Nuclear Non-Proliferation Treaty (1968) – Johnson's era was marred by the march on Selma, the riots in Watts, Detroit, and Newark, and ugly racial tensions with the rise of the nascent Black Power movement, which had become frustrated by Martin Luther King's policy of non-violent confrontation.

But the looming shadow that tainted his credibility, and ultimately doomed his presidency, was the war in Vietnam. Continuing the policies of predecessor Kennedy, and upping the ante in disastrous fashion, the war consumed the treasury, and, by the final days of his presidency, had killed 27,000 Americans. Wave upon wave of violent anti-war protests drained his health and resolve, caused irreparable discord within his cabinet, and created an unbridgeable abyss between him and the voters. (In 1971, three years after Johnson had declined to seek a second term, the Pentagon Papers were leaked to the press which detailed the deadly, secret escalations in the war and the lies told to Congress and the public. This unpardonable covert action forever sealed Johnson's reputation.)

In Schenkkan's Society, Johnson drives an implacable bargain with friend and foe, but he's more misunderstood good-ol'-boy than wily, fanged politico. All it takes for him to walk on the dark side are a few whispered sweet Communistic conspiracies by shadowy FBI director J. Edgar Hoover (David Coffee, nicely hissing through the role), or patriotic jingoism delivered in school-marm fashion by smarmy defense secretary Robert McNamara (Chris Hutchison). He can coax and browbeat, but the wind's left him. All that's left is bombast.

In this impressionistic epic, in association with Dallas Theater Center, Society makes the most out of cascading circumstances and the wages of fate. It's uncanny how politics, and politicians, remain the same. ML King (Shawn Hamilton, whose repressed fury and, later, tired resignation, elevates the show from its Pennsylvania Avenue-who's who quality) gets equal stage time, until Vietnam's tsunami sweeps in new troubles. There's a relentless drumbeat to all this constant wash of drama that quietly numbs. Yet when General Westmoreland (David Matranga) suggests sending more troops to Vietnam to clinch the war – 300,000! – the audience gasped. Most are old enough to have lived through that era, but the insane folly of war caught us in the throat.

As LBJ, Brandon Potter is in complete control. This is definitely a signature role, and he relishes the command and dark impulses of this wayward leader of the free world. He wants to do good, he means to do good, but the tornado of current events is terrible, swift, and unforgiving. Potter gives us a sly glance, a back country maxim or two, a bullying blue note, for which Johnson was notorious, and a barbed-wire twang. (He, and Hamilton, are the ones who get their characters' cadences right. Everyone else's accents sound like their wigs.) The more Johnson is buffeted, the more Potter turns as gray as the set, as if the life's draining out of him. In a soft scene before he decides to resign, he sits curled at Lady Bird's feet. There's a glimmer of the connection the couple must have shared many years ago when they were equally untainted. It's fleeting, but affecting, a furtive glimpse of the man Johnson might have been had he never gone to Washington.

As history boils and characters rush on and off, Schenkkan paints Johnson as if limning a tragic figure from Shakespeare. It's a stretch. LBJ never had that nobility.