Man rarely needs an excuse to fight, but throughout history there have been plenty, from declarations of war over buckets and invasions over baked goods to families divided by the great (and ongoing) Team Edward versus Team Jacob debate of ‘08. In Unlock’d, Queensbury’s bright and bubbly new musical, the excuse is a lock of hair – and it’s based on a true story.

Inspired by “The Rape of the Lock,” Alexander Pope’s 18th century satirical take on a very real fracas over the snipping of a lock of hair from one Arabella Fermor by one Lord Petre and the subsequent family quarrel that could have been an early (and aristocratic) Hatfields and McCoys, librettist Sam Carner and composer Derek Gregor borrow the silliness that Pope elevated to Homer-level epic and give it a run through a Shakespearean musical machine they should probably have patented.

In Unlock’d, Belinda (Shanae’a Moore), the Cher Horowitz of Hampton Court, spends her days accepting gifts from potential suitors and preening in front of mirrors, tending to hair that is widely acknowledged to be the most beautiful in all the land. Living in the shadow of Belinda’s beautiful blond mane is her step-sister Clarissa (Kathryn Porterfield), who’s afraid she’ll never be noticed, and never be loved, until her sister is betrothed and all other men are forced to give up on her. Luckily for Clarissa, one of the many men in love with Belinda, The Baron (Thomas Griffin Williams), seems perfectly made to be the hero to Belinda’s ingénue.

Back from three years in battle, The Baron has fallen head over heels for Belinda in only a week, much to the confusion and disappointment of his bookish brother Edwin (Patrick Massey), who’s spent his last three years living in his own head. Soon, all three come to the conclusion that the only way to get what they want is through Belinda’s hair. To complicate matters further, a trio of sylphs (Holland Vavra, McKenna Marmolejo and Adrienne Shearer), dead set on maintaining the integrity of Belinda’s tresses (and her innocence), battle with a trio of gnomes (Dylan Godwin, Mark Ivy and Rodrick Randall) who want it cut in the name of anarchy.

From here, the story follows the trajectory you would expect, with a series of misunderstandings that reveal that Belinda isn’t as oblivious as she seems, the Baron has more depth than you think, and both Edwin and Clarissa can learn from their more socially successful siblings when they put aside their judgments and jealousy. Still, it’s clear these characters have been cared for, each carefully crafted, and it’s hard not to root for them, especially when director Marley Singletary’s production is so perfectly cast. 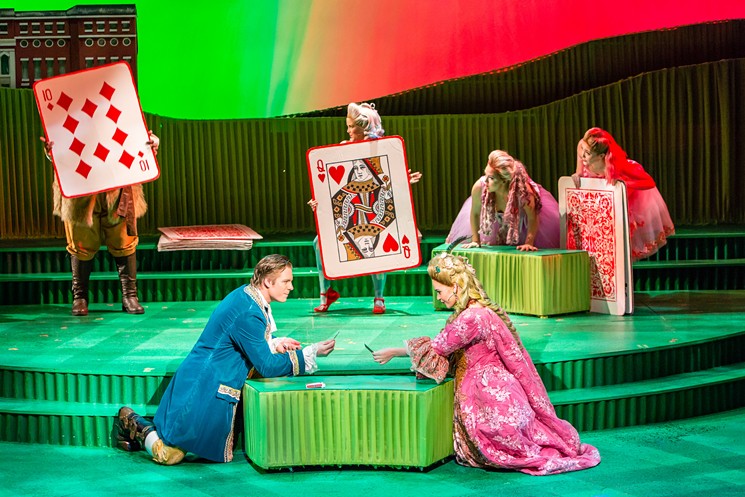 The cast of Queensbury's Unlock'd.
Photo by Christian Brown
Moore’s Belinda is wide-eyed and adorable, a strong contrast to Porterfield’s shrewd and increasingly resentful Clarissa. They each prove to be a likeable foil to the other. Thomas Griffin Williams plays The Baron’s journey well as he reconciles his thinking side with some of his more caveman instincts. And Massey, somehow the most hopeless of them all, is quite endearing. And oh boy, can all four sing.

They are well-supported sonically by Vavra, Marmolejo, Shearer, Godwin, Ivy and Randall, who not only play fairies and gnomes but ladies and gentleman of the court – all to great comedic effect. Vavra’s voice stands out from the crowd and Ivy really gets his turn in the spotlight as he morphs between sensitive Cockney gnome, foppish aristocrat and the voice of Beatrice, Belinda’s most prized piece of hair.

Music director Jonathan Craft leads a five-piece band in bringing to life Gregor’s delightful melodies and toe-tapping beats. There are surprisingly few standout numbers, though “Off to the East” comes closest, and “While Belinda Sleeps” is an excellent introductory piece that really showcases the vocal talents of the entire ensemble (except Moore’s Belinda, who gets her first chance shortly after during “Hair Song”).

Ryan McGettigan’s set is a very green and very accordion-like representation of a garden that is surprisingly versatile. The costumes by Kristin Knipp and Amber Stepanik are a mix of colors and playful designs, from rich purple to bubblegum pink and “back then-ish” appropriate to “daughter’s tea party” appropriate.

In a show with talking locks of hair, among many other examples of zaniness best left as a surprise, a tea party aesthetic is actually quite appropriate. To be successful, Unlock’d really needs to connect to the childlike imagination of its audience members, where wheeling yourself across the floor constitutes distance traveling and a supersized deck of playing cards isn’t just a novelty but a reminder of what it’s like to play pretend in a world much bigger than you. And, for the most part, it is successful. Unlock’d may not prove to be the most memorable or substantive show you’ve ever seen, but it’s just like your fifth birthday party. You may not remember it all that well decades later, but you probably had a great time in the moment.