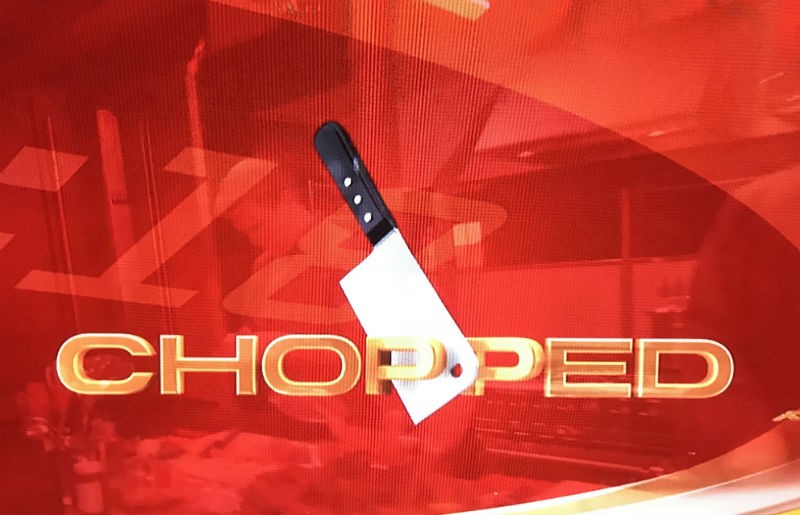 There’s a slew of current television programs designed to make us ponder our human condition and maybe improve it. For example, NBC’s The Good Place quirkishly weaves philosophical and theological ideas into very funny half-hour installments.  This Is Us is a poignant, tear-seeking drama about the ties that bind us. HBO’s The Leftovers urges us to consider grief and loss, subjects we’re all bound to experience. But, the one ongoing television program which effortlessly speaks to our humanity and what we can do to improve our station is Food Network’s cooking competition, Chopped.

You might disagree, but in my effort to become a contestant on the show’s bloggers episode (it’s not scheduled yet, but I’m officially tossing my hat in the ring for the day it is, Chopped producers) I’ve been binge-watching the show. Now nearly 10 years old and in its 37th season, the show is a contest between four cooks, who create epicurean delights over three, timed rounds.  They're given mystery basket ingredients and attempt to avoid being “chopped” by a panel of judges. These culinary experts have become celebrities in their own right, thanks to Chopped’s ongoing appeal.

My brother is the true food expert in our family. I consider myself his sous chef when we grill for our friends and family at tailgates. We started cooking competitively and placed third a few years back in Saint Arnold Brewery’s One-Pot Showdown, just behind cooks from Underbelly. I started watching Chopped to learn more about food and how to bring more excitement to our cooking endeavors; but, while watching hour after hour of my favorite TV show, I gathered a lot more than new recipes or cooking techniques. Sometimes they’re subtle as a pinch of nutmeg and occasionally they’re as jarring as heaping tablespoons of cayenne, but in every episode of Chopped there are plenty of reminders on how we can all live better lives. Here are 10 examples: 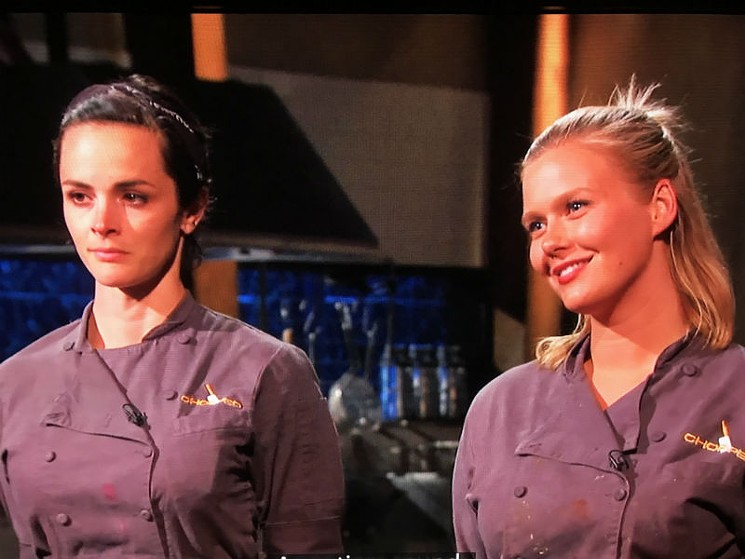 No one steps into the Chopped kitchen without ample preparation. Most participants are cooks who have studied their craft and/or worked in kitchens for years. Those who aren’t culinary pros, like the celebrities and everyday Joes and Josephines who are invited for special episodes, tell the camera they’ve practiced for weeks ahead of their appearances. They remind us that approaching any challenge is less daunting when we’ve done the work to put ourselves in positions to succeed.

There are all sorts of examples of this in Chopped, particularly those focusing on healthy eating, like "Healthy Rivalry," (Season 27, Episode 2) and "Clean Eatin," (S32, E1). One of my favorite contestants ever is Deborah Caplan, whose self-esteem blossomed before viewers' eyes with a Chopped championship and a return visit that made her something of a culinary darling. The most moving instance came during Season 26's "Chopped Catwalk," episode. The contest thrust four working or former models into competition. The winner and runner-up had both battled eating disorders as models and turned to food to restore healthy images and lifestyles to their own lives. Ashley Holt and Danika Brysha delivered exquisite meals and eloquent emotions in the episode.

LOVE WHERE YOU’RE FROM

If I have one quibble with my favorite food show, it’s that Houston has been woefully under-represented in its episodes. True food enthusiasts know our city is a culinary wonder, rife with James Beard Award nominees. It’s a place where palates are thrilled by a diverse melting pot just bubbling over with tasty goodness. But, it took the program 27 seasons, by my count, to bring a Houston chef to its kitchen. Hundreds of episodes passed and featured cooks from places like Evanston, Illinois and Monroe, Louisiana before H-town ever got an invite. Outrageous. When Houston chefs compete, no matter how they fare, I root for them because there’s a special sense of pride in knowing those with similar values and experiences are representing your own to a world at-large. 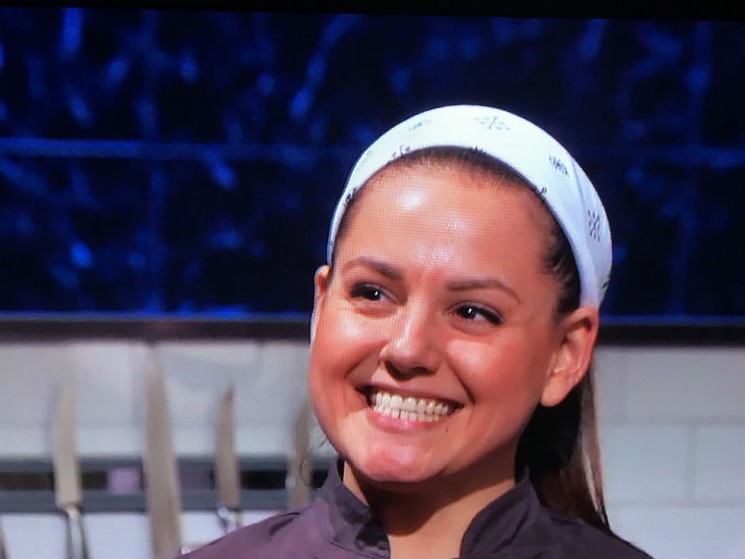 Watch any episode of the series and you’ll notice that everyone – from host Ted Allen, to judges like Scott Conant and Alex Guarnaschelli and especially the participants – exudes self-confidence. They’re imbued with self-positivity. Did that help them achieve success or is the confidence a by-product of their accomplishments? Who knows? The point is, confidence and success go together like cinnamon and sugar. People who lack self-assurance often stumble over life's hurdles. The inability to believe in one’s own abilities, however meager they may seem, can be crushing. You may not become a champion (at Chopped or any other endeavor) solely from self-confidence; but, without it you’re not even in the competition.

Each episode ends essentially the same way, with a singular “Chopped champion.” That means three-quarters of the show's participants have gone home losers. Some are lemon-bitter and make futile, after-the-fact cases for their defeats (Boston chef Andy Husbands comes to mind after a Grill Masters loss to champion Megan Day); but most have shown great humility and recognized they simply were outcooked. It's important to be confident in one's abilities. It's equally important to acknowledge the gifts and strengths of others and to appreciate those traits in others. On Chopped, those moments are genuine because most participants understand the difficulties their fellow chefs have endured to make a mark in the culinary world.

MAKE THE MOST OF SECOND CHANCES

Some of my favorite episodes are the series’ “redemption challenges.” Runners-up from past episodes are invited back to the kitchen for a second chance at glory. These episodes remind us that, though we may fail at times, there’s something to be gleaned from those moments. If we learn from our mistakes, we can create new opportunities from them. Second chances matter.

Those who succeed on the show are typically the ones who can make a silky meal from a sow’s ear – literally, at least in the case of the Chopped Champions finale, (S14 E6). Creative, out-of-the-basket thinkers don’t always become Chopped champions, but their efforts to transform mundane basket items into something truly unique count for a lot. They take chances, which sometimes fall short, but always prove more interesting. In life, tackling any issue with creative verve is a good skill. Adding some creative color to an already vibrant life keeps one’s days riveting and exciting. 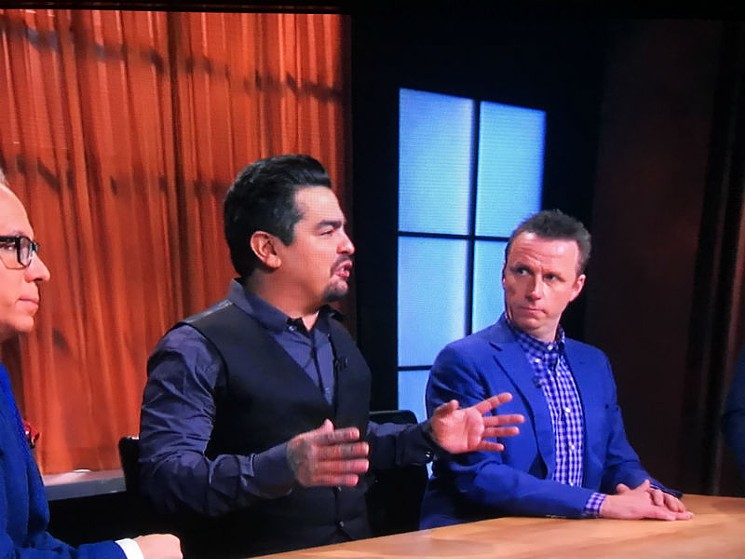 The show’s judges are highly accomplished restaurateurs. Some, like Aaron Sanchez (Texas-born!) began cooking as kids in their family restaurants. They’re graduates of some of the world’s most notable culinary schools or have apprenticed with renowned master chefs. Watching Chopped, it’s clear that their opinions are important to those receiving their critiques. Hearing how you might improve from those who are successful is a good practice in the real world, too.

The best chefs on the show repeatedly taste their creations as they’re creating them. They do this to ensure what they ultimately deliver is something flavorful. Symbolically, the act reminds us to savor our lives’ experiences and to take stock in what we're bringing to the figurative table.  If things seem bland, we can then add the spice that makes for more interesting moments.

Anyone who’s watched Chopped knows that the participants’ true nemesis isn’t another chef or any of the judges – it’s time. Each round’s meal must be completed within a specific time frame and mismanagement of the clock often leads to unfortunate results. In life, we know that one day we’ll be “chopped.” Because the clock’s ticking, we should always strive to use our time wisely to create a masterpiece for ourselves and others to enjoy. If you haven’t been using your time wisely and to the fullest extent, why not begin doing so? As the show’s host, Ted Allen, would say, “Clock starts now!”