Photo courtesy of Tightn' Up!
Houston's Tightn' Up! make music so funky, it's like they've reinvented the genre.
It feels like forever ago when Craig of Heights Vinyl invited me to watch a band called Tightn' Up! practice at his shop back when it was on White Oak in the Heights. I remembered him saying, "they're a crazy funk band," making me wonder how crazy they really were. I always wondered why anyone would start a funk band in a world where acts like Funkadelic & Curtis Mayfield existed. That's such a high bar to attempt to even get close to, though I can tell you that Houston's Tightn' Up! have definitely stepped up what you might think of funk music, and their latest album And Now We Can Begin not only touches on the funk of the past, but raises the bar by adding soul and occasional Afrobeat structures. In ten tracks the Houston group not only meets the standards of funk's past, they break past it and breathe new life into it at the same time.

Opening with the heavy percussive notes of "Sellout," the band quickly makes their presence known. Funky guitar that doesn't clutter up the syrupy bass line, drums that snap and pop, and vocals that lie right above all of the notes that the band make together create a sound that's hard not to deny. There's a deep heft to how solid the sounds this band makes together are, where it feels like the stones return to the genre in a way that you feel deep in your stomach. This continues on the track, "On the Line," where the band adds that Curtis Mayfield sounding guitar grit while singer Ashlei Mayadia adds more attitude than that of the typical suburban white boys that have cluttered funk music over the last decade ever could.


By the third song, "Goosebumps," you should realize that this band isn't slowing down, because they can't. When you make music that's so soulful and funky, the type that sticks to your ribs, you can't help but ooze the emotion and acumen it takes to make such deep sounds. Mixing R&B with funk infused guitar that creates a soulful and spacey sound, the drums never get to out of line, showcasing a restraint you don't hear much anymore from drummers who could easily tear it up. They keep that up on "Love Is Here," where the notes that come off of the instruments sound like something from another planet, complete with a groove that reminds you of the past without sounding like it was lifted in the process. There's nothing fraudulent here, as Tightn' Up! aren't the typical weekend warriors that the genre has attracted, and they make you feel each note.

After the groovy and impressive instrumental "Stank N' Sticky" that easily lives up to its name, the five piece moves on two tracks later with the slower paced sounds of "D.N.O.M.R." The song is a slow burn, creating a gritty and spacey sound that reminds you of the early days of Funkadelic in how it grooves along. The percussion sounds almost tribal, the bass sounds like it might walk away, and the guitar crafts a minimalist sound that never loses your attention. Two tracks later they offer another groove infused song with "Janglefonk," where the build is as solid as the payoff. The advantage to playing music you feel is that your emotion and chops translate to whoever hears it, and the song definitely holds plenty of emotion. The backing vocals alone are ballsy and steer far from the blue-eyed and watered down versions of soul and funk that have almost ruined funk music. There's a thing that happens between the music that the band is making and the vocals that never sound like a put on, they never sound safe, and they never sound compromised. There's a magical brew that this band cooks up together, that you can't help but groove to, even if you weren't trying to. 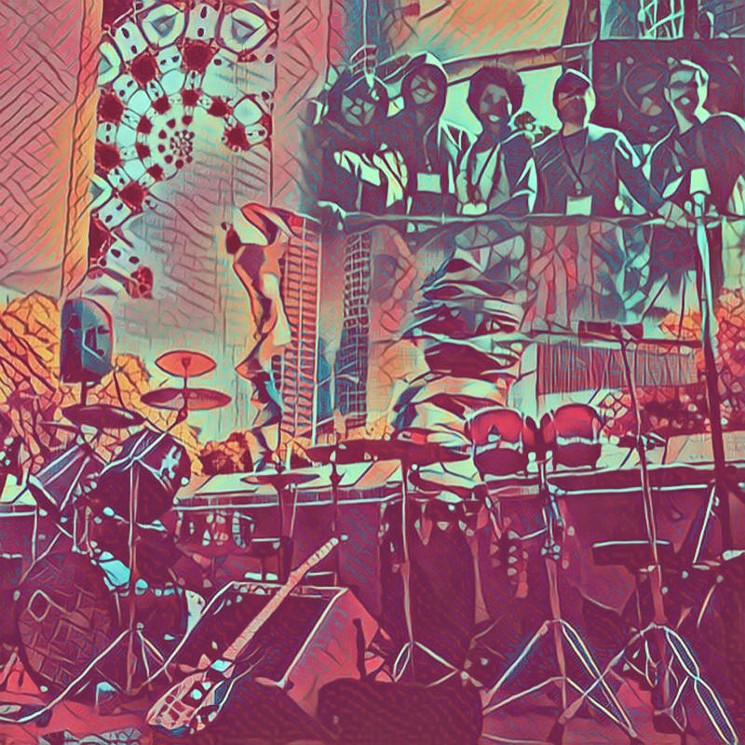 Now We Can Begin is funky & soulful, just like you expect funk music to sound.
Courtesy of Tightn' Up!

There's no mistaking that Tightn' Up! is the strongest example of what funk can be in today's music world. By keeping it real, by never compromising, and by staying true, the band proves real quick that they're the torch bearers of the funk music flame. You can stream And Now We Can Begin in all of the usual places, or you can order it directly from the band's website. You can catch Tightn' Up! bring their funky sounds to all when they perform a rare acoustic set as part of the Canned Acoustica series at Discovery Green on June 10. The all ages show will also feature performances from Only Beast, Vodi, The Suspects and The Tontons. Music at 5:30 p.m.; Free.
California Privacy Policy California Collection Notice
Do Not Sell My Info
Use of this website constitutes acceptance of our terms of use, our cookies policy, and our privacy policy The Houston Press may earn a portion of sales from products & services purchased through links on our site from our affiliate partners. ©2022 Houston Press, LP. All rights reserved.