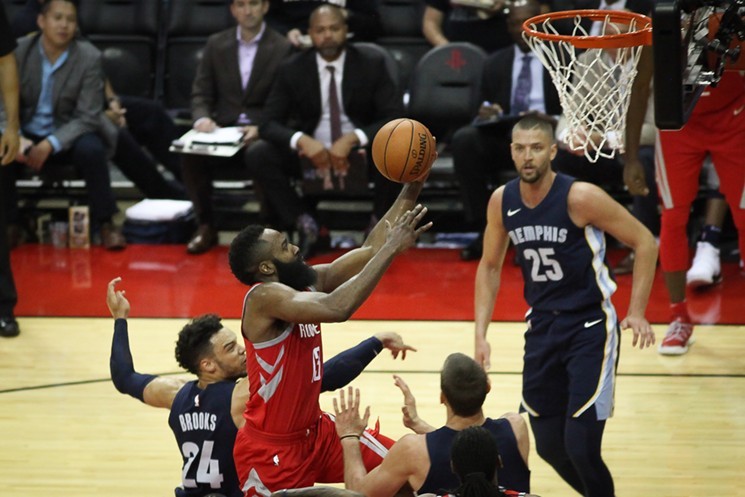 Photo by Eric Sauseda
James Harden had 24 points in the first half and finished the game with 30 as the Rockets won game four in Oakland.
No team has lived the adage "it's not how you start, but how you finish" more than the Rockets on Tuesday night in Oracle Arena. The Rockets didn't score for the first five minutes of the game and went down by 12, but the held the Warriors to 12 points in the fourth quarter and eked out a 95-92 win, the first loss for the Warriors in their last 17 postseason games.

With the win, the Rockets regain home court advantage in this now best of three series as it shifts back to Houston Thursday night.

He won't want to put any posters from Tuesday night, mainly because he was in at least two of them. The first was a vicious dunk (more on that in a moment). The second was going to be a dunk, but then...

It was becoming readily apparent by the end of the game that these two teams were gassed. Neither coach is willing to delve deep into his bench, keeping short rotations of around seven guys on each team. The playoffs always see fewer players on the floor for games, but this has been ridiculous.

The game may have ended up close, but it was basically a series of mini blowouts. Golden State outscored Houston by 9 and 17 in the first and third quarters. The Rockets outscored the Warriors by 16 and 13 in the second and fourth quarters. Both teams have the ability to score in bunches and that was on full display Tuesday.

The Rockets started the game without scoring for 5 minutes. The Astros scored more points in the first three innings in San Francisco than the Rockets did in nearly half a quarter. Fortunately, they kept the Warriors within striking distance or it could have gotten out of hand quickly.

This is the first game of either the Western or Eastern Conference Finals where two teams have been within 4 points in the fourth quarter. Both series are tied at two games apiece, but up until Tuesday night, every game had been a blowout. This finally felt like the conference finals.

Chris Paul was emotional following the win, letting fans in Houston know how important they are to the team and that they were coming home.

"I think this as the highest level we've ever played defensively." Just two days after calling his team soft, Coach Mike D'Antonio heaped praise on the Rockets and they were deserving. Not only did they hold the Warriors to only 12 in the fourth quarter, they played with the kind of grit and determination they will need if they are to win the series. Shout out to P.J. Tucker as well who had 15 rebounds at maybe six-foot-five on a good day.

James Harden is not normally the guy who puts this on people, but all we can say is rest in peace, Draymond Green.