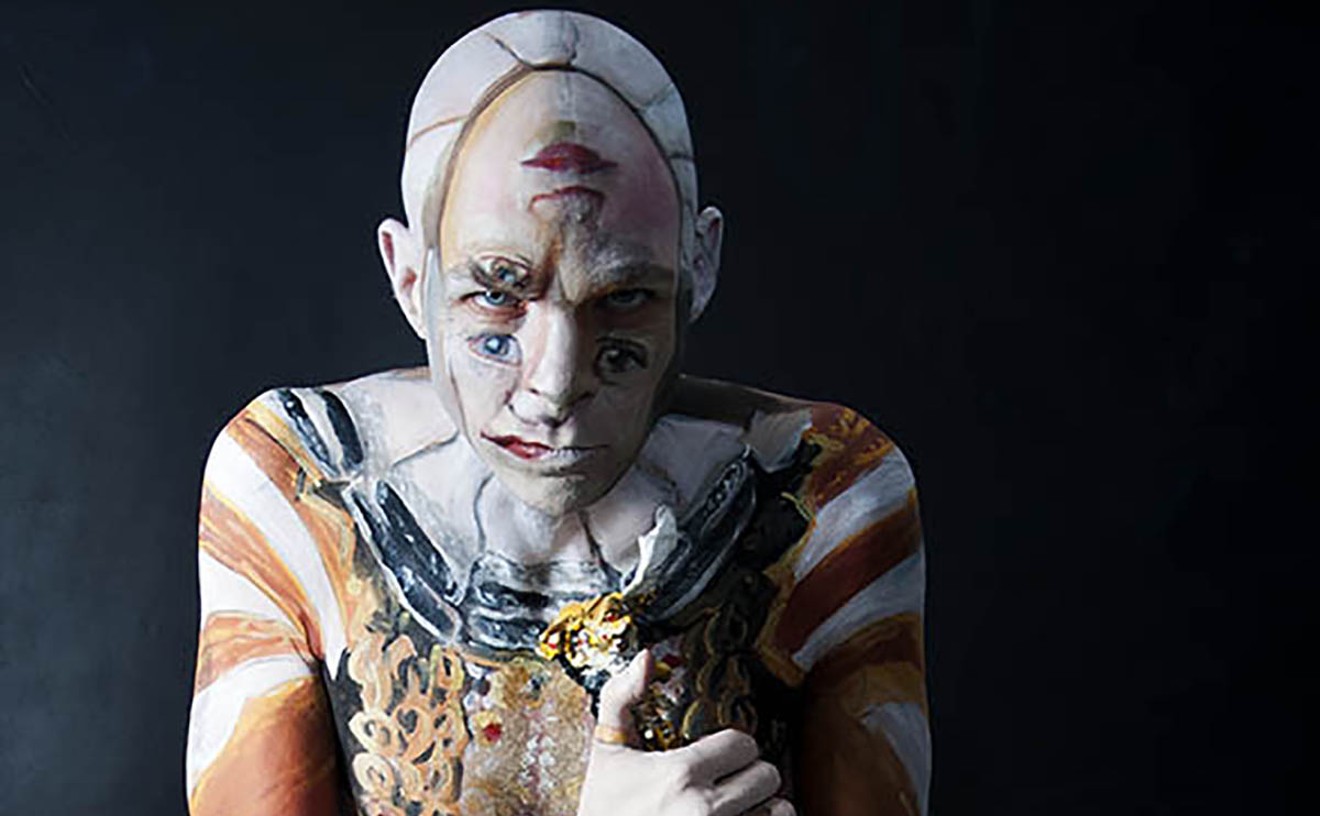 Photo courtesy of the artists and G Spot Contemporary Art Space
Portait of Dorothea von der Schulenburg, after Unknown (His) (detail), by Chadwick & Spector.
The Third Reich looted and plundered hundreds of thousands of pieces of artwork and treasure during World War II, destroying not only the culture of occupied countries but the histories of notable families in the form of ancestral portraits. While the Allies were able to recover a considerable number of those treasures after the war, many others were either destroyed, hidden, or not returned to their owners. 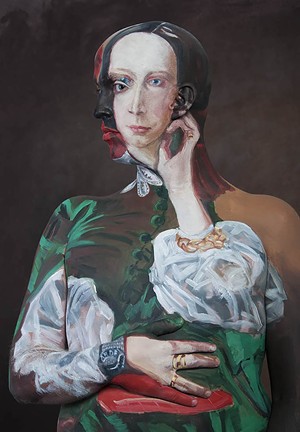 Portrait of Franzisca Sophia, after Knesebeck, by Chadwick & Spector.
Photo courtesy of the artists and G Spot Contemporary Art Space
So when collaborators Chadwick Gray and Laura Spector — who couldn't make it as a married couple but who are flourishing as an artistic team — travel to the great museums of Europe they always ask to see "the box."

When the curator at the Johann-Friedrich-Danneil-Museum in Salzwedel, Saxony-Anhalt showed the pair its card catalogue of unrecovered stolen art, Chadwick & Spector set out to recreate some of those missing pieces on the canvas most familiar to them — the naked human form.

(L) Venus Complains To Cupid, after Lucas Cranach, and (R) Portrait Margareta von der Schulenburg Postumus Widow, after Unknown (Peeking Eye), both by Chadwick & Spector.
Photos courtesy of the artists and G Spot Contemporary Art Space
Spector, who before had only painted Gray in a process that can take as long as 18 hours, branched out this time to include additional models for "Museum Anatomy: The German Works," on view at Gspot Contemporary Art Space.

The resulting photographs and three-dimensional sculptures are intricate, highly detailed portraits of the upper echelons of European society, made even more surreal as the trompe l'oeilism is done on a wide cross section of contemporary society: white and African American, obese and slender, male and female, gay and straight.

It's a fascinating exhibit and viewers might find they prefer one medium over another. The photographs are sheer perfection, with the positioning of painted body parts arranged just so before the final C-print is rendered. Notice how just a few changes can completely change the focus in both iterations of Portrait Margareta von der Schulenburg Postumus Widow, after Unknown (Peeking Eye). Or how the body has become so transformed by the meticulous painting that it's unclear if we're looking at an arm or a leg in Venus Complains To Cupid, after Lucas Cranach. Stare long enough and a male model's left eye becomes a woman's right eye in Dorothea Sophie, after House of Glücksburg.

(L) Eleanor of Austria, after Joos van Cleve, and (R) Dorothea Sophie, after House of Glücksburg, both by Chadwick & Spector.
Photos courtesy of the artists and G Spot Contemporary Art Space
Others might find themselves gravitating towards the sculptures. It is only in this alternate reality that plaster casted hands with crossed fingers can protrude from a neck, as in Reading Girl, after Domenico Fetti; and a body cast of an overweight woman with pendulous breasts and a willing heart can be so beautifully rendered into the diptych Huntress Diana with Two Nymphs, after Paris Bordone.

These recreations of lost art have been patiently awaiting their day in the sun. Originally scheduled to open at City Hall, the show was sidetracked by Hurricane Harvey and only narrowly missed becoming lost again when the venue's exhibition space suffered extensive damage.


Spector will be in the gallery to discuss the pair's work and their process from 3 to 5 p.m. June 9 and June 16.

For more information about Chadwick & Spector, visit ChadwickAndSpector.com, paintnaked.org and YouTube.com/Paintnaked.
California Privacy Policy California Collection Notice
Do Not Sell My Info
Use of this website constitutes acceptance of our terms of use, our cookies policy, and our privacy policy The Houston Press may earn a portion of sales from products & services purchased through links on our site from our affiliate partners. ©2022 Houston Press, LP. All rights reserved.