Photo by David Bray
Regina Hearne, who sang in 2017's Soulful Sounds of Christmas (center), returns to The Ensemble Theatre to perform in Sistas: The Musical. Chika Caba Ma'atunde wrote the music and lyrics for Soulful and returns to handle musical direction for Sistas.
Sistas: The Musical ticks off all the boxes for a light, fun evening of theater. Chock-full of chart-topping hits through the decades — ranging from Billie Holiday to Beyoncé — trunks filled with period costumes and a quintet of powerhouse singers, it's a show that's sure to have audience members bopping in their seats.

But dig a little deeper and it becomes apparent that playwright Dr. Dorothy Marcic, a career academic with 15 books under her belt, is on to something bigger. It was her in-depth research into how women are depicted in Top 40 music that led her to pen both of her musicals: Sistas and Respect: Women and Popular Music.

In Sistas, making its regional premiere at The Ensemble Theatre, Dr. Marcic's script pits two generations of women — along with the ghosts of their mother and recently deceased matriarchal grandmother — into a situation where these very different personalities realize that they're not so different after all.

If learning how to play nice through the creative use of music sounds a bit familiar, it's interesting to learn that Marcic got her start in the arts working as a production assistant on television's Mister Rogers’ Neighborhood.

Regina Hearne is set to portray the eldest sister, Dr. Simone, in Sistas. We haven't seen her onstage since Soulful Sounds of Christmas (she has been busy getting her degree from Texas Southern University), and Hearne is looking forward to this production.

"People are going to be excited. The musical really is filled with popular music that spans through decades," says Hearne, adding that Marcic does an excellent job of arranging the songs thematically. "It really, really just continues the storytelling because the play is filled with great stories."

"Each one has their own unique personality that brings to the melting pot wonderful emotions, talents — just a goulash or conglomerate of different perspectives. Everybody is great in their own way," says Hearne.

"Basically we are memoralizating our grandmother so we’re trying to find a song to pay tribute to her because she instills in all of us a passion and a love for music." 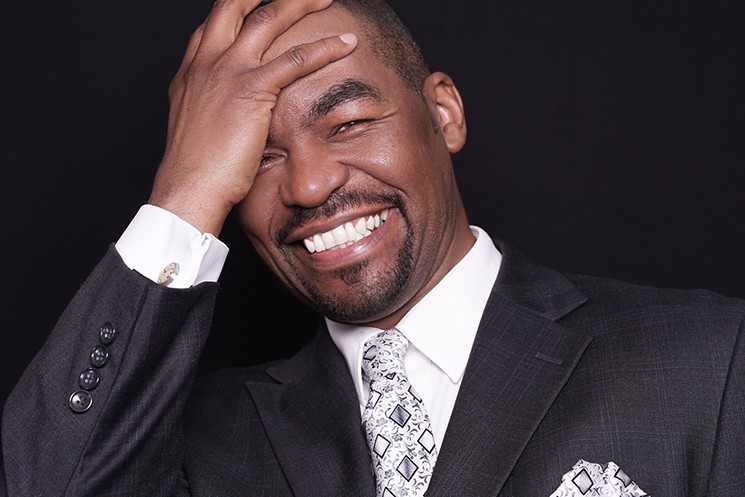 Patrdo Harris, who directed Soulful Sounds of Christmas, is set to direct Sistas: The Musical for The Ensemble Theatre.
Photo by Kufunya Kail
Hearne says the music is one of the best parts of the show. "One of the pieces that I love is 'Stormy Weather' by Lena Horne. And so one thing that I love about the direction of Patrdo [Harris] is that he knows when to allow you to give more and when to allow you to pull back. So this piece is not necessarily a number, a musical number, but it is a more pedestrian type of storytelling and so that’s what I love about it," says Hearne, adding that it's a more natural way of storytelling than the big Broadway style.

This will be Harris's 20th show with Ensemble and the director has high praise for Chika Caba Ma'atunde, who is handling the musical direction in Sistas. "Chika has done an amazing job with the music. Exceptional vocalists; the music is absolutely beautiful.

"To me it's more like therapy. They all lost their grandmother and they go to the attic of the house. [The play is about] therapy, history and also healing," says Harris.

The musical also introduces some big dance scenes. "We do a whole little Motown medley, the Supremes, Aretha Franklin — they’re dancing. Now we do Mary J. Blige, we do Beyoncé. We do some great choreography; we keep moving," says Harris. "We hope [audiences] will be singing along, tapping along, laughing, even crying.

Performances of Sistas: The Musical are scheduled for 7:30 p.m. Thursdays, 8 p.m. Fridays, 2 and 8 p.m. Saturdays, 3 p.m. Sundays, June 28-July 29, The Ensemble Theatre, 3535 Main, 713-520-0055, ensemblehouston.com, $36 to $61.
California Privacy Policy California Collection Notice
Do Not Sell My Info
Use of this website constitutes acceptance of our terms of use, our cookies policy, and our privacy policy The Houston Press may earn a portion of sales from products & services purchased through links on our site from our affiliate partners. ©2022 Houston Press, LP. All rights reserved.