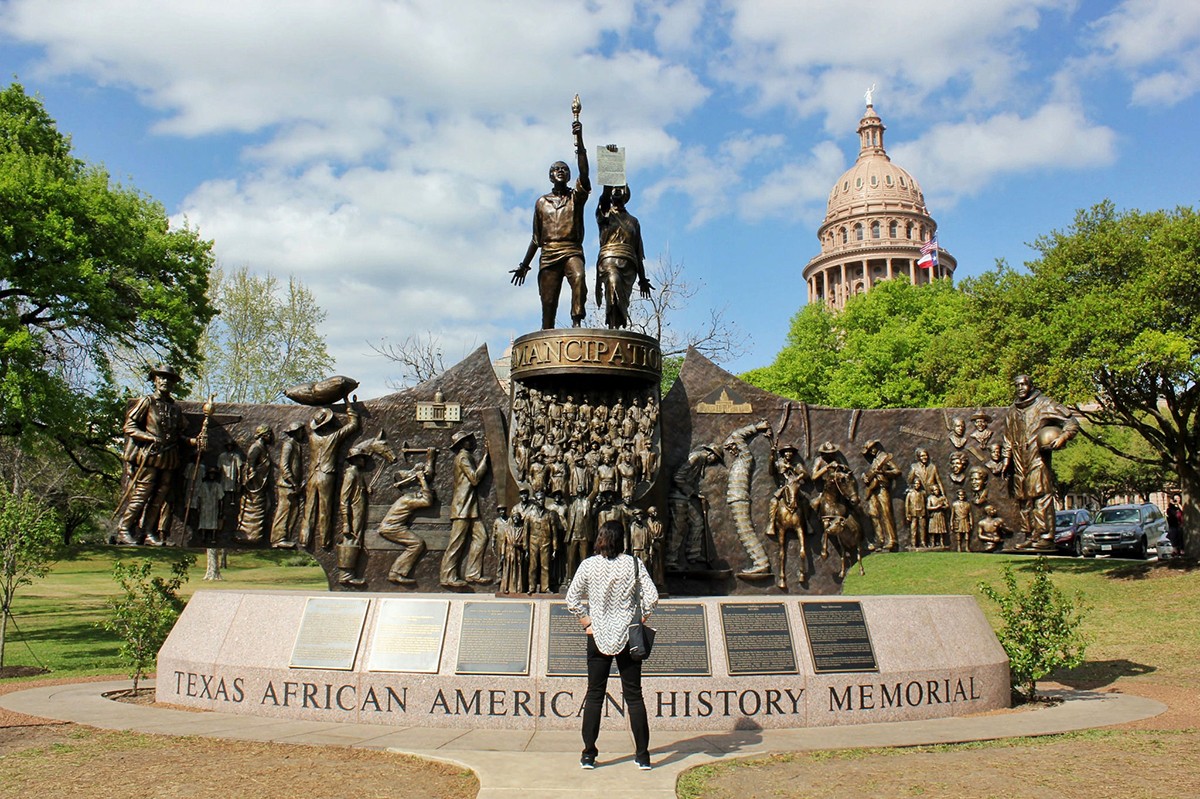 Photo by Paolo/justtraveling.com via CC
The Texas African American History Memorial was unveiled in 2016 and honors the contributions of African Americans in Texas dating back to Estevanico, who set foot on what is now Texas soil in 1528.
This summer we're taking a look at interesting, odd, historic and just plain worth it road trips in and around the Lone Star State.

Estevanico, from northern Africa, was resourceful, intelligent and a survivor. Life gave him more than lemons but this victim of enslavement — first by the Portuguese and then by the Spanish — found himself on the Narváez expedition to colonize Florida in 1527.

The Spanish explorers did not fare well there, suffering numerous attacks by the Native Americans and unable to find the rumored gold. They slaughtered their horses and melted hardware for boats in an attempt to sail across the Gulf of Mexico, though they shipwrecked and washed ashore on Galveston Island. Out of the original 300 explorers, 80 survived and — after spending four years enslaved again, this time by Native Americans — the group had dwindled to just four: Estevanico, Andrés Dorantes de Carranza (his slaver), Álvar Núñez Cabeza de Vaca and Alonso del Castillo Maldonado.

Estevanico was never free of slavery, although we're digging the theory that he faked his own death by the Zunis to gain his freedom. He did go on to become a skilled guide and is credited with discovering New Mexico for the Europeans, as well as being the first person of African descent to set foot in what is now Texas. His figure is sculpted on the far left of the Texas African American History Memorial on the grounds of the Texas State Capitol.

The Texas Historical Commission has done an amazing job documenting stories like Estevanico's in their publication, African Americans in Texas: A Lasting Legacy, available in print and online.

Persons of African descent played an important role during the Texas Revolution. Although Mexican law gave liberties to free individuals, many chose to side with and fight alongside the Texians.

"Samuel McCullough, Jr., a free individual of African heritage, was among the first Texians wounded in the conflict during the seizure of Goliad in 1835. People of African descent also fought at San Jacinto, helping Texas earn its freedom from Mexico in 1836," writes the Texas Historical Foundation in its publication, African Americans in Texas.

Buffalo Soldiers of the 25th Infantry, some wearing buffalo robes, circa 1889.
Photo courtesy of United States Library of Congress's Prints and Photographs division
Early African Americans also were instrumental in defending frontier forts before and after the Civil War.

"Many of these frontier forts were protected by African Americans known as Buffalo Soldiers, a name given by American Indians because of the similarity of the curly hair of both the buffalo and African American troopers. Some of these far-flung and isolated posts were also home to the Black Seminole Scouts, descendants of early African Americans who joined Seminole Indian tribes in Florida to escape slavery and were recruited by the U.S. Army because of their exceptional tracking skills. Although Buffalo Soldiers and Black Seminole Scouts received little respect and even less admiration from the society they sought to protect, they served with distinction, and 22 were recipients of the Medal of Honor—the U.S.’ highest military decoration, awarded for bravery “above and beyond the call of duty.” (page 8, African Americans in Texas: A Lasting Legacy)."


The Texas Historical Commission has even gone a step further to develop a thematic marker map that covers African American history in Texas, pulling historical data from landmarks, markers, cemeteries and the National Register of Historic Places. Which means it's time for a road trip.

Download the app here and then head out on the highway to follow in the footsteps of early African Americans at Fort Phantom Hill (with its rumored ghost sightings), the civilian conservation corps at Fort Griffin, Fort Richardson, Fort McKavett and Fort Concho.

"Churches have played a significant role in Texas’ African American culture, with many serving as anchors for the neighborhoods that developed around them. These churches were often forces for positive change by adopting and persistently advocating social causes. This was evident in the struggle for education as churches established some of the first schools and colleges for African Americans in Texas. Colleges, such as Wiley College in Marshall, were established by churches to advance the cause of higher education. In addition to church-built schools, a number of facilities were created through a collaborative community effort, where African Americans pulled together to build their own schools and hire teachers. All of these learning institutions have served as sources of education and pride for area residents, remaining as treasured today as they were in the past (page 8, African Americans in Texas: A Lasting Legacy)."

Originally called Post on Clear Fork of the Brazos, this site is now called Fort Phantom Hill, most likely due to the frequent mirages of ghostly Native Americans in the moonlight.
Photo by Nicolas Henderson via CC

Download the publication, African Americans in Texas: A Lasting Legacy, at thc.texas.gov/public/upload/African-Americans-in-Texas-2016.pdf.

Information about the Texas African American History Memorial is at taahmf.com/the-monument.

Download the Texas Heritage Trails' mobile app, detailing African Americans in Texas (and others), at texastimetravel.com/guides-apps.

Learn more about African American Heritage and explore different regions in Texas at texastimetravel.com/travel-themes/main-african-american-heritage.
California Privacy Policy California Collection Notice
Do Not Sell My Info
Use of this website constitutes acceptance of our terms of use, our cookies policy, and our privacy policy The Houston Press may earn a portion of sales from products & services purchased through links on our site from our affiliate partners. ©2022 Houston Press, LP. All rights reserved.