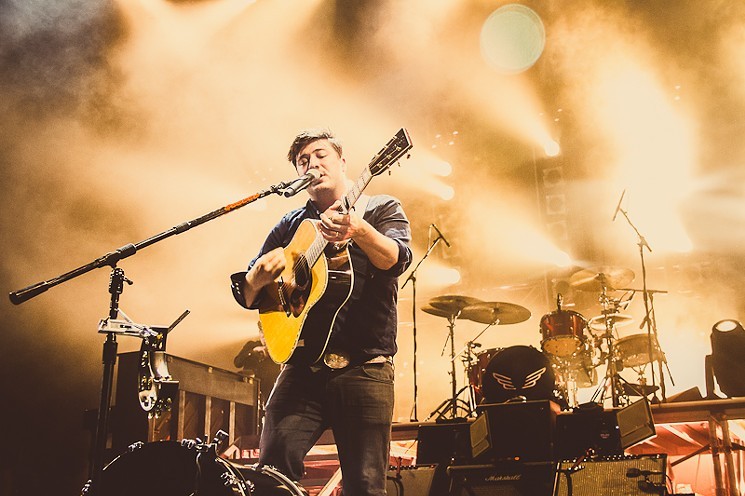 Photo by Violeta Alvarez
Mumford & Sons are among the headliners for this year's installment of the Voodoo Music + Arts Experience, which dropped its lineup on Tuesday morning.
This year marks the 20th anniversary of Voodoo Music + Arts Experience. That is somewhat strange, considering it feels like Austin City Limits Music Festival outpaces Voodoo in terms of longevity, when in reality, ACL is three years younger than its Louisiana counterpart.

Point being, Voodoo Fest – in light of its 20-year existence – needed to do it up big in 2018. And while there are certainly bright spots, it’s safe to call this year’s lineup – unveiled Tuesday morning – a bit of a disappointment.

Look, Voodoo Fest was bound to be a victim of its own success this year. Last year’s lineup was chock-full of hitmakers new and old – Kendrick Lamar, Foo Fighters, The Killers, Post Malone, LCD Soundsystem, and many more. So, unless it landed a mega-artist the likes of Drake, Beyoncé or Eminem, it stood to reason Voodoo Fest might take a small step back in 2018.

It did, and then some. With all due respect, the headlining trio of Mumford & Sons, Childish Gambino and Arctic Monkeys don’t exactly measure up to last year’s trio of the aforementioned Lamar, Foo Fighters and The Killers. Mumford & Sons, it could be argued, are well past their commercial prime of five some-odd years ago. Childish Gambino (aka Donald Glover) is riding a hot streak the likes of which we haven’t seen in some time, including the No. 1 song in America right now (“This is America”), but still, festival headliner? It’s a toss-up. Arctic Monkeys? Good band. Would have been a lot cooler headliner ten years ago.

Not that Voodoo Fest 2018 is a total dud. Far from it, in fact. While its headliners pale in comparison to last year, Mumford & Sons, Arctic Monkeys and Childish Gambino all have a certain name-brand value among them, and Glover in particular will draw quite the crowd. Plus, the depth and diversity of the festival is hard to deny.

After all, any festival that features Marilyn Manson, Janelle Monae and 21 Savage is certainly running the gamut of musical genres. Monae is among the most interesting, eclectic artists in pop music today, 21 Savage has a diehard legion of followers, and if Manson has his head on right, his stage show is hard to rival.

A Perfect Circle (while not Tool) is a solid outfit. Third Eye Blind – particularly during an abbreviated afternoon set, when they won’t have to fill out a headlining set list – will be fun, if frontman Stephan Jenkins is in the mood to play the hits (can never tell with that dude). Modest Mouse was never my bag, but the band, in its prime, was certainly a quality outfit. And, hey, Houston’s own The Suffers are on the bill!

So, yes, Voodoo Fest once again delivered an impressive array of artists for its 20th anniversary. Did it quite measure up to past lineups, which featured the likes of The Weeknd, Tool, Pearl Jam and Nine Inch Nails? Not especially. Nonetheless, Voodoo Fest – particularly if the weather is gorgeous, as it was last year – provides an opportunity for revelers and music fans to spend a weekend in one of the most unique cities in America. Even if the music lineup itself does leave a little something to be desired.
California Privacy Policy California Collection Notice
Do Not Sell My Info
Use of this website constitutes acceptance of our terms of use, our cookies policy, and our privacy policy The Houston Press may earn a portion of sales from products & services purchased through links on our site from our affiliate partners. ©2022 Houston Press, LP. All rights reserved.