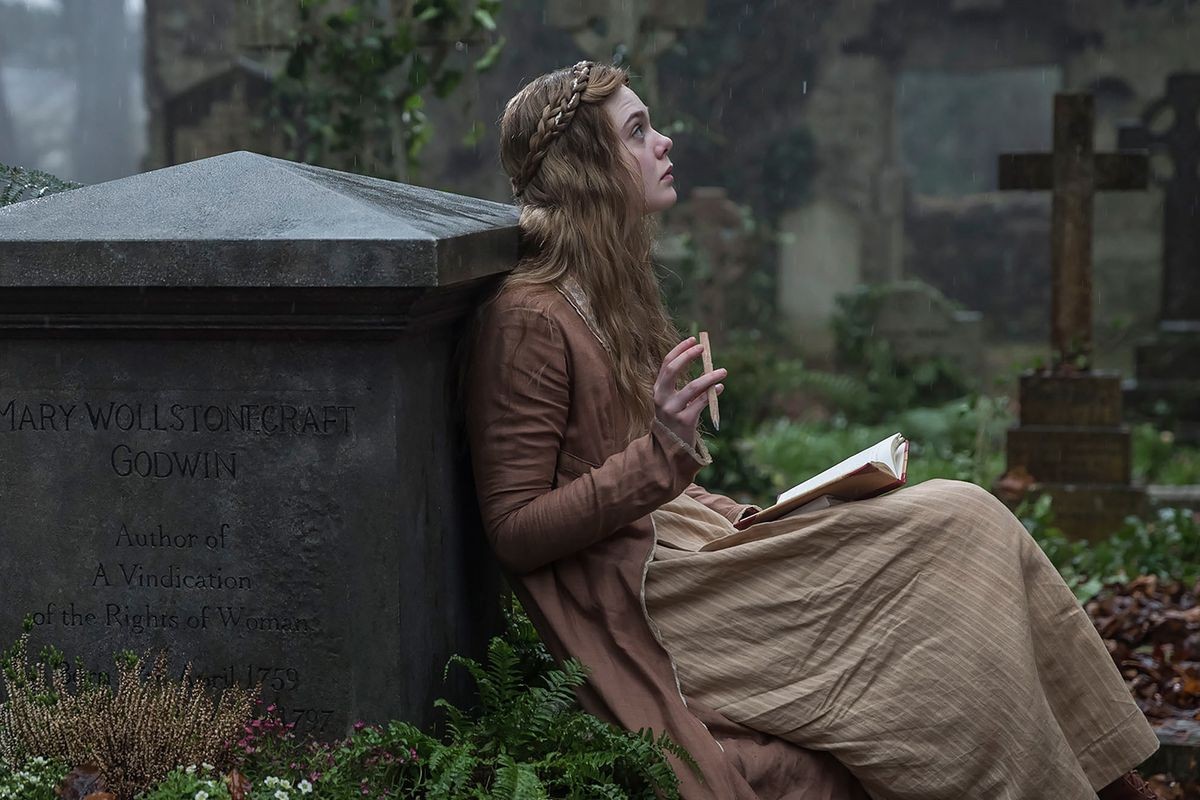 Screencap from Mary Shelley
Not the happiest of lives even with all that talent.

Written by Emma Jensen and starring Elle Fanning in the title role, the film follows a young Mary Wollstonecraft Godwin through her tumultuous romance with Percy Shelley (Douglas Booth) up to the publication of her most famous work, Frankenstein. Their lives are explored across the great scandals and emotional upheavals that Mary suffered throughout her early adulthood, from the loss of her daughter to the isolation from her father to the indignity of having her novel published anonymously and popularly attributed to her famous husband.

These are just the peaks and valleys in the story, though, and in all honestly they don’t really describe what Mary Shelley is truly about. The film works very hard at drawing a parallel between Frankenstein’s creature and the life of Mary herself. Fanning brings a wonderfully understated strength to the character. She often seems quiet and even at times lacking agency. However, it makes the brilliant moments when she does stand and assert herself all the more satisfying.

Mary is a person of deep personal convictions and strength who spends much of the film fighting hard against the miseries inflicted on her by other people. Percy is feckless and inconsistent, rarely seeming to understand Mary despite his adorations. Lord Byron — played by Tom Sturridge, who chews so much scenery they probably had to pay the carpenters to build it twice – is a casually cruel man who torments his guests and Mary’s pregnant sister Claire without a second thought. Not to mention a world that thinks a free-loving woman author of science fiction is well out of her place.

I found myself thinking that if Belle from Beauty and the Beast was a real person, this is exactly what her life would have been like. Mary is starved for understanding and bereft of comfort, and the results of this turns a life that is often thought of as a literary fairy tale into one of monstrous circumstances. It’s Mary’s ability to rise above those circumstances that lends the movie its power. She creates where her monster would destroy and stays where her monster would leave to die. Mary Shelley is strongest when it is grim.

However, it is very, very grim. There’s little color in Al-Mansour’s movie. You probably could have presented it in black and white and lost little but the intensity of the dead frog galvanizing scene and its steampunky goodness. Mary’s life contains few bright spots, and the lack of narrative dynamics makes watching it something of a trudge despite its excellent quality.

It’s definitely a guilty pleasure film for book nerds, something along the lines of Agnieszka Holland’s Total Eclipse or Philip Kaufman’s Henry & June. Though, it’s worth noting that Mary Shelley is far tamer than either of those movies and possibly would have benefited from their more sensual approach to spice up the existential dreariness that is present. It remains a compelling look at Mary Shelley’s exceptional life, and a story about what creates monsters both fictional and literal. That makes it worth watching.