When Grateful Dead singer/guitarist Jerry Garcia died on August 9, 1995 from a heart attack, it probably seemed inconceivable even to diehard Deadheads that the band could continue. Jerry was more than just the leader (although, by many accounts, an extremely reluctant one). He was the – not to get too hippy dippy – the guiding light, the force, and the glue that had guided the group since its 1965 inception. 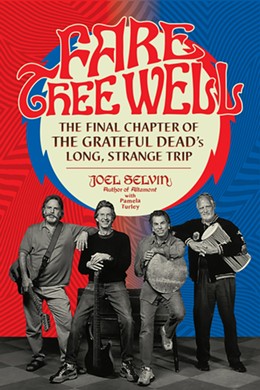 Book cover by Da Capo Press
But later that year when the “Core Four” remaining original/classic members convened, no one quite knew what to do. Singer/guitarist Bob Weir, bassist Phil Lesh, and drummer/percussionists Mickey Hart and Bill Kreutzmann had a lot to consider not only for themselves, but the 60+ full time employees the band employed, families, fans, and road crew.

That the four would spend good chunks of the next 20+ years battling among themselves for the band’s musical legacy and the right to play Dead material is the compelling central story of this book.

Seasoned and talented music journo Selvin – along with Turley – have presented a portrait of a musical family for whom the “good vibes” of the Summer of Love dissipated into arguments, frantic phone calls, and boardroom show downs.

Musically, since Garcia’s death, the Core Four have played together in a dizzying array of combinations and allegiances under names like The Dead, the Other Ones, and Furthur – not to mention offshoot groups with rotating lineups like Rat Dog, Phil & Friends, Mickey Hart’s Drum Planet, and Mystery Box.

Selvin takes readers inside the conflicts and personal lives of the band members, often mired in their own issues with drug, drink, and marriage. Familiar jam band names like Warren Haynes, Bruce Hornsby, Trey Anastasio, and Jimmy Herring also sucked into the mix. But it’s not all turmoil. When the music is cooking and the vibe is good, some of that magic gets captured again.

Selvin also writes compellingly about the “War of the Widows” that erupted after Garcia’s death between former wife and mother of his children Carolyn “Mountain Girl” Garcia and newer wife Deborah Koons, also the executor of his estate.

When a boat left to spread some of Jerry’s ashes under the Golden Gate Bridge in San Francisco Bay, Koons refused to let Garcia onboard, leaving her tearful and stunned at the dock while Weir attempted to make a peace that never happened. That the Grateful Dead still have also had a huge musical and commercial continuity with a never-ending stream of live releases and merchandise sales was lost on no one in the story checking their bank account balances.


While all the world believed that the four members gathered onstage for the “Fare Thee Well” stadium shows in 2015 (two in Chicago, two in Santa Clara) were a friendly unit putting an end to the band’s story, they couldn’t have actually been further apart. Even their tenuous, uneasy agreements were fraying. The gap further widened when Hart, Kreutzmann, and Weir almost immediately joined forces with singer/guitarist John Mayer to tour widely as Dead and Company, including many dates this summer.

If there’s a “villain” in the piece, Selvin points the finger at Phil Lesh and his wife Jill, painting them as demanding, complaining, and thin-skinned with more than a little air of superiority. They care about money and set list choices right up until the audiences for the Fare Thee Well shows came streaming in to capture the musical magic one last time.

Yet, as Selvin writes, the impact of the shows that were almost willed into existence by the band’s rabid fans, was profound, and transcending the bitterness between the men onstage and their adoring audience.

“The event was freighted with so much meaning to so many people for so many reasons, resonating far beyond the world of the Deadheads,” he offers. “In some ways, Fare Thee Well was an echo of Woodstock forty-six years later, a fresh reminder that the ideals would not disappear, no matter how much they had been marginalized, dissolved, derided, and plain laughed off. The crowds came together for peace and love for the music and understood that, for however long they would be together, they had become a community.”

Fare Thee Well is by turns sad, surprising, and uplifting, and a crucial addition to any Bookshelf of the Dead – even if its story is still unfolding.
California Privacy Policy California Collection Notice
Do Not Sell My Info
Use of this website constitutes acceptance of our terms of use, our cookies policy, and our privacy policy The Houston Press may earn a portion of sales from products & services purchased through links on our site from our affiliate partners. ©2022 Houston Press, LP. All rights reserved.