SNAP Needs Our Help, But We Need Them More to Battle Pet Homelessness

Photo courtesy of Spay-Neuter Assistance Program, Inc.
Kitty is patiently awaiting surgery. It wants to be part of the solution, not part of the pet overpopulation problem. There are an estimated 70 million homeless cats and dogs in the United States.
The S.O.S. distress flag went up earlier this month for Spay-Neuter Assistance Program, Inc. You don't kick a dog while it's down and the network of mobile and stationary veterinary clinics can't take much more.

An idiot arsonist set fire to his own business, killing one firefighter and forcing its strip mall neighbor, the San Antonio SNAP clinic, to scramble for new housing. That was in May 2017 and, while none of the surgical patients overnighting at the clinic were harmed, it was a huge blow to the clinic and the community.

"We had to get permission for our team to go in and get essential things while arson investigators checked for structural soundness," says Les R. Wood, SNAP's grants and contracts coordinator. "Just uprooting from one day to the next to move a veterinary clinic was a herculean task.

"We kept going but people didn't know where to find us, our systems were down and of course more expenses were incurred," adds Wood. That fire also marked the beginning of a year from hell.

"In a single 12-month period, a fire, a hurricane, flooding, and ice storms all significantly impacted clinic revenues," wrote SNAP in its S.O.S. to the community.


SNAP got its start in Houston in 1994 when it launched its mobile spay-neuter clinic, the first in its field. Now, as the network of clinics approaches its 25th year (in 2019), the past due invoices are piled mile high and things are looking grim with vaccine suppliers threatening to stop shipments.

But were it not for this yearlong perfect storm the clinics were actually on track for success. 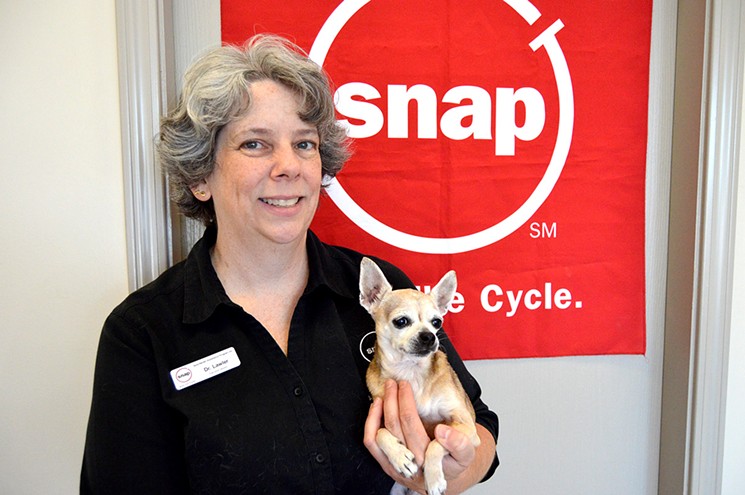 Jalapeño the pup is in good hands with Mary Kate Lawler, DVM, Spay-Neuter Assistance Program's executive director.
Photo courtesy of Spay-Neuter Assistance Program, Inc.
"Our executive director [Mary Kate Lawler, DVM] is now in her third year; she’s a veterinary surgeon. She’s quite accomplished: a super woman," says Wood. "She schedules herself with double the number of animals and on top of that she's a really savvy businesswoman."

Wood says Dr. Lawler has been with SNAP since 2005, having served as the chief of staff in San Antonio before being promoted to executive director. "She looked hard at the books and the bottom line and asked, 'What do we need to do as an organization to be sustainable?' We can’t count on a bequest or a donation. We have to put all the things in place to allow us to be sustainable for the next 25 years," recounts Wood.

So SNAP just needs a little extra help right now, but Houston desperately needs SNAP. "We’re not the only spay-neuter providers, but we are the largest," says Wood. "The shelters have started offering them at low cost, there's BARC, the Houston Humane Society. SPCA offers low cost as well as CAPS in west Houston."

Of the estimated 70 million homeless dogs and cats, about ten percent make their way into shelters. The rest remain on the streets to starve, get injured or killed, or reproduce to make even more kittens and puppies.
Photos courtesy of Spay-Neuter Assistance Program, Inc.
Wood says that even with SNAP's estimated 30,000 surgeries in Texas each year (20,000 in the Houston area), plus the efforts of city, county and privately-run shelters, it's still not enough to overcome the animal overpopulation problem.

Reddit blew up earlier this week with angry folks weighing in to the thread, "Please stop dumping your pets!!! Take them to a shelter!!!" Houstonians are upset that animals are being dumped on the side of the road and in rural areas, and angry that people won't make the effort to deliver strays or unwanted animals to a shelter.

Wood says there's hope, but it's a very long trajectory. Everybody has heard of food deserts, areas where it's difficult to buy affordable or good-quality fresh food, and a similar problem exists with veterinary services.

"In a relatively short period of history we’ve been extremely successful at getting the message out about spay-neuter. It’s all hinged on family income. For families making $30,000 or more, there’s a good chance their dogs and cats are spayed or neutered. The problem is financial means," says Wood. Low income families typically live in neighborhoods where low or no cost veterinary services don't exist. Places like SNAP, with its two brick-and-mortar clinics plus mobile satellites in Baytown and Fort Bend County, are a start.

So let's turn the tide and help SNAP keep its doors open for the next 26 years. Visit their giving page at snapus.org/crisis18 and sign up for a monthly donation or a one-time gift.

For more information about the Spay-Neuter Assistance Program, visit snapus.org.
California Privacy Policy California Collection Notice
Do Not Sell My Info
Use of this website constitutes acceptance of our terms of use, our cookies policy, and our privacy policy The Houston Press may earn a portion of sales from products & services purchased through links on our site from our affiliate partners. ©2022 Houston Press, LP. All rights reserved.