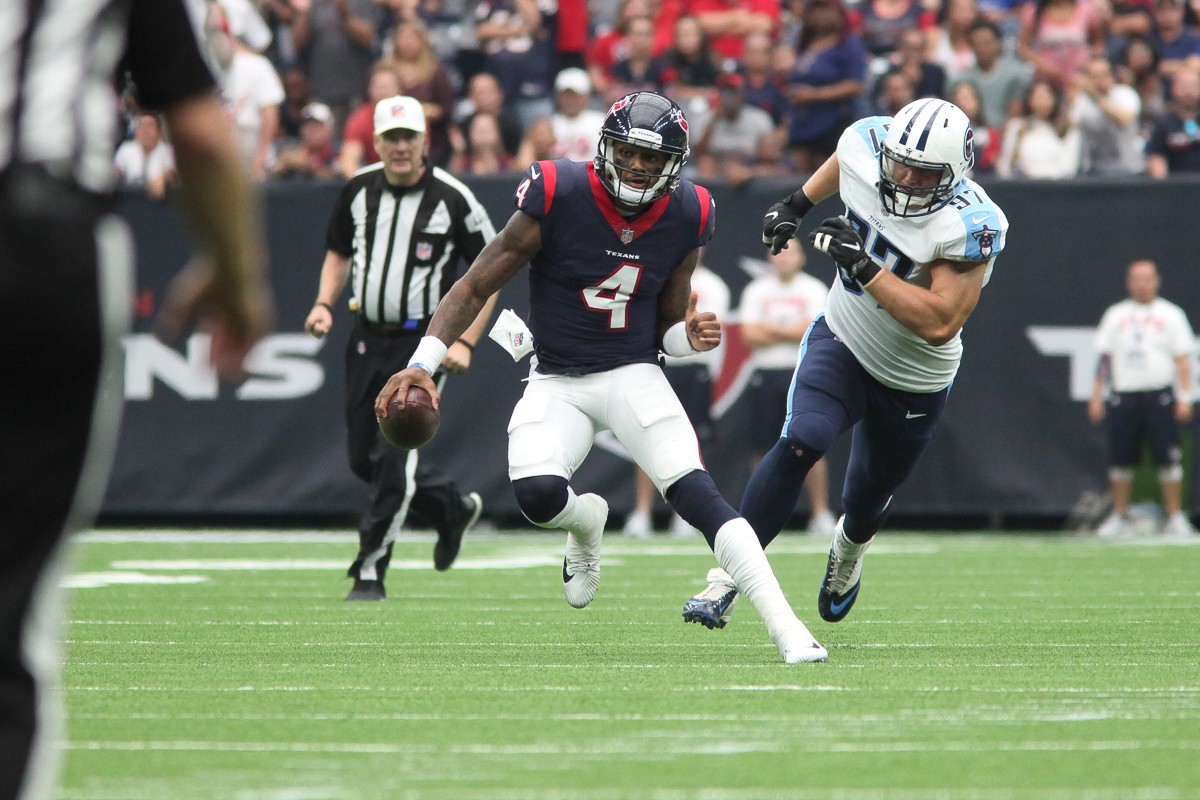 Photo by Eric Sauseda
If Deshaun Watson needs a chip on his shoulder, maybe his strange MADDEN score will do the trick.
There are two largely subjective measurements that NFL players care about way more than some of them may let on. One is the NFL Network's Top 100 players, which we've covered in great detail in this space over the last several weeks. In fact, two nights ago, Texans wide receiver DeAndre Hopkins was named the 13th best player in the league, in that poll of his peers, and if you think he doesn't care, I give you this tweet:


The second subjective measurement that riles up players (that you think wouldn't, but does) is their Madden video game player score. Madden, of course, is the ultra-popular NFL video game, which comes out annually and has been around for decades now.

If you think players don't care about their Madden scores, just know that back in 2009, John Harris (then, my radio co-host) and I were reading off the freshly released Texans' players Madden scores on the air. We got to the wide receiving corps and David Anderson, coming off a 38-catch season, was somewhere in the mid 60s. (For those who don't play the game, Madden scores are almost like a college course, where a mid-60s grade would be like a D.)

Well, Anderson happened to be listening, and he literally called the hotline of our show to voice his displeasure. Thankfully, he didn't shoot the messengers, but it illustrates the larger point — these guys care about certain forms of assessment, and oddly enough, the anonymous programmers of a video game fall into a group whose opinion matters.

So, the scores for the next iteration of the Madden genre, Madden 2019, are now in the can, even though the game isn't set to release for a couple more months, and the website Madden School, has leaked the top handful of players for each of the 32 NFL teams. Let me say that, first, I do not play Madden, but I do like to scour the player scores. Also, let me say that this is as intrigued as I've been about Texan players' Madden scores maybe ever.

So without further ado, here are the ten Texans player scores that were posted earlier this week by Madden School:


Ok, let's go through these:

J.J. Watt – 96
Hey look, I love J.J. Watt, and I hope like hell that he meets and exceeds what basically amounts to nearly an A+ grade, but he hasn't played healthy, high-level football since December of 2015. It's June of 2018. In the end, it's a show of respect, more than anything, I guess. If Watt does play at a 96 level this season, look the hell out, league!

DeAndre Hopkins – 93
I think this score is appropriate and accurate, for the 13th best player in the National Football League. I haven't seen the sub-scores that make up the 93, things like speed, hands, and awareness, but I'm guessing speed is where Hopkins gets dinged a little bit.

Tyrann Mathieu – 90
Almost like Watt, Mathieu hasn't played full healthy football for a stretch since he tore his ACL late in the 2015 season. And like Watt, if Mathieu plays at a 90, holy guacamole, will the Texans' defense be fun to watch this season!

Andre Hal – 87
I hate even assessing this, given what Hal is going through right now, but I think we can all agree — Andre Hal, while a solid performer and someone who I want back on the field as soon as possible, is not the Texans' fourth best player....

Jonathan Joseph – 84
.....nor is Johnathan Joseph, at age 33, the team's fifth best player. Come on, Madden programmers, you're better than this!

Lamar Miller – 83
I don't know what to think of this Lamar Miller score, because, on the one hand, Miller has been mostly  underwhelming and average in his two seasons with the Texans. On the other hand, when Watson was the quarterback last season, Miller, like many others, played at a higher level. So, I guess.... 83.... whatever. Hey, speaking of Watson raising someone else's game....

Will Fuller V – 81
Will Fuller had seven touchdowns on 13 catches in four games with Watson as his QB. There is no bigger boom or bust wide receiver in the NFL than Will Fuller in 2018.

D.J. Reader – 80
Ok, here is where the scores get REALLY weird. I love D.J. Reader, and have no problem with the Madden folks essentially giving him a score of a B-, but ....

Deshaun Watson – 78
This score right here would be enough for me to try to hack the game, or just create my own version of Deshaun Watson that shoots lasers from his eyes (similar to the ones jettisoned by his right arm) and bolts of lightning from his ass. Seriously, Madden people, do you even watch the NFL? (If not, please watch this YouTube video. Thank you.)