Love Never Dies: The Sequel to The Phantom of the Opera Arrives 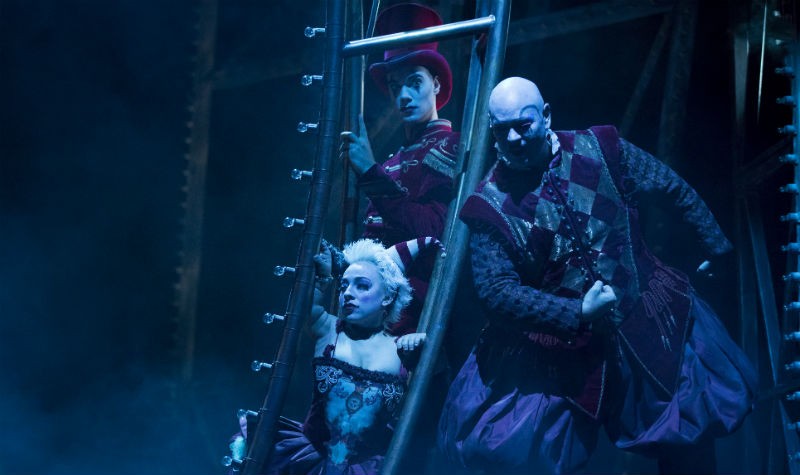 Photo by Joan Marcus
Katrina Kemp (“Fleck”), Stephen Petrovich (“Gangle”) and Richard Koons (“Squelch”), star in Love Never Dies.
Like the second act of Stephen Sondheim's Into the Woods — the part where all those happily-ever-afters get disrupted — Love Never Dies takes the sweeping romanticism of the ending of The Phantom of the Opera and says, well, not so fast.

It's ten years after the Phantom has fled the Paris Opera House and yes as pretty much every reviewer has said, ten years after a story set in 1881 does not work out to 1907, but that is indeed the year we find ourselves in. Remember theater is all about suspension of disbelief.

Christine Daaé and Raoul are married with a son named Gustave but idyllic they are not. Seems while Christine's star has risen to all sorts of heights, he's at loose ends, given to bad habits. They are short of funds and she has just accepted an invitation to a New York opera house to help pay the bills.

"She's become a world famous diva. She’s treated to the most incredible hotels across the entire world. Unfortunately not everything is always beautiful roses, unicorns, rainbows," says Meghan Picerno who plays Christine. " It’s a very strained marriage. she’s making the money. he’s lost all their money gambling and drinking."

As it turns out, The Phantom has relocated to New York, actually Coney Island to be precise. He, of course, still wants to win Christine back and plans to lure her over his new home amid the amusement park attractions.

Soprano Picerno travels easily between the worlds of opera and musical theater and says she was drawn to this work because of the beautiful music by Andrew Lloyd Webber. That and she says because Christine is as iconic a role as any anyone could think of in opera. "To find out what happened to her ten years later was extremely attractive to me. None of us are the same as we were ten years ago. Especially like the gap of age 18 to 28.

"One thing I really loved about it, they dive into the psyches of the characters. I also found her character to be quite strong. I mean you have to understand it's within the constraints of 1907 and a woman can't be like the 2018 woman we have now, but I was really attracted to her strength and struggles she is presented with."

"There's no divorce back then but there's still love. There's still hope that it can get better."

Especially important to her, Picerno says, was the fact that she got to ask Lloyd Webber all sorts of questions about his creation to better understand the musical. "Coming from the opera world I don’t always have the luxury of speaking to speak to the composer," she says drily.

She promises "some of the most beautiful costumes you will ever see on stage." One of which is a peacock dress that she wears that weighs 35 pounds and has to be re-beaded every month.

Besides the music, the set and the costumes, what will cause audience members to leap to their feet, Picerno says, is the message of the story. "Which is to love," she says.

Performances are scheduled for July 17-22 at 7:30 p.m. Tuesday through Thursday and Sunday, 8 p.m. Friday and Saturday and 2 p.m. Saturday and Sunday at the Hobby Center, 800 Bagby. For information, call 713-315-2525 or visit thehobbycenter.org or broadwayatthehobbycenter.com. $35-$165.
California Privacy Policy California Collection Notice
Do Not Sell My Info
Use of this website constitutes acceptance of our terms of use, our cookies policy, and our privacy policy The Houston Press may earn a portion of sales from products & services purchased through links on our site from our affiliate partners. ©2022 Houston Press, LP. All rights reserved.