Screenshot from YouTube video by Showtime
It was only later that Philip Van Cleave, president of the Virginia Citizens Defense League, realized he had been duped into an interview with Sacha Baron Cohen and tricked into reading cue cards that promoted arming children with guns.
Provocateur Sacha Baron Cohen has done it again, duping the likes of Sarah Palin, Roy Moore, Joe Walsh and Dick Cheney with his impersonations and pranks while filming Showtime's Who Is America?. But it's his first look interview with gun rights advocate Philip Van Cleave where Cohen's alter-ego, anti-terror expert Colonel Erran Morad, suggests that arming even the tiniest of tots with plush-toy embellished weaponry is the answer to mass shootings in schools.

In just 30 minutes Cohen's satire gets our attention, adding plenty of viral-worthy fuel to the ongoing debate about how to best protect American society from mass murderers. After the shootings in Parkland, Florida and Santa Fe outside Houston, parents and teens have been mobilizing through social media, marches and sit-ins, while Senator Ted Cruz digs his heels in even deeper defending Second Amendment rights.

There are no shortages of suggestions to the problem — ranging from better communication with students to arming educators and installing metal detectors — though nobody can seem to agree on the solution. But there is one arrow in the defense quiver that just might have a leg up on law enforcement, and that's with the decades old practice of sending dogs in to schools and workplaces in search of contraband.

He tells us that law enforcement can't train its dogs to search for gunpowder based or ethanol based substances, as that would negate their ability to use probable cause in a search warrant.

None of those restrictions are in place with the working dogs at Interquest Detection Canines, who also are trained to find medications, alcohol and gunpowder substances. Ferdinand says they'll set up an annual contract with a school district, based on the size of the district and the number of campuses, and then visit the school locations unannounced throughout the year. They're also called upon when administrators' antennas are on high alert.

"We have school districts that call us all the time for an emergency. Predominately if there’s a tip that there might be a weapon on campus or a drug transaction," says Ferdinand. "We’ll try to accommodate them assuming our dogs are in the vicinity." 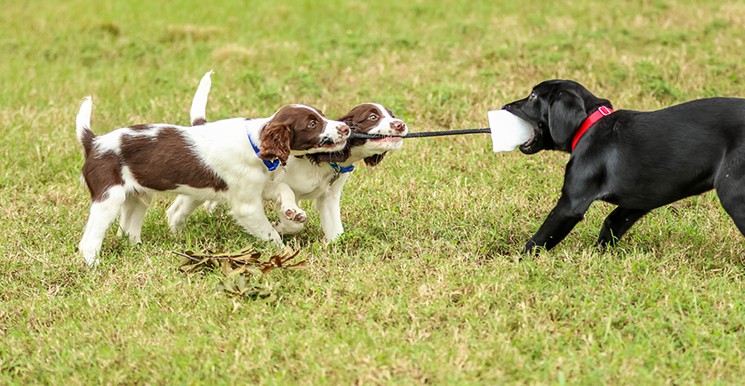 The working dogs of Interquest Detection Canines do it for the love of toys, but their efforts can help save lives in work and school environments.
Photo courtesy of Interquest Detection Canines
Interquest got its start in Houston 30 years ago and Ferdinand says it has grown exponentially over the years, expanding to other parts of the United States and eventually franchising. When he and cofounder Debbie Farmer started the company in 1988, they never imagined that their services would become so relevant to modern society.

"Our original position was that there will come a day when our services won’t be needed," says Ferdinand. "We trained dogs on gunpowder because of fireworks; it was a problem for school administrators. As we evolved into the '90s that gunpowder base became ammunition and guns."

Ferdinand is aware of the suggestions that have been bandied about for protecting our schools, but says one area that is often overlooked is the parking lot.

"I think in the current environment it’s important to recognize that we can harden all the campuses, lock them down, we can ensure the safety within the building in many respects. But many of our school districts also have student parking lots. We check the parking lots as well. Believe it or not there are a lot of instances where contraband is found in a car versus in a school locker or backpack.


"We can put in metal detectors, cameras, additional guards, but somebody needs to pay attention to thoroughly check the parking lot," says Ferdinand.


"We’ll find more contraband in vehicles than we do in the internal system of the building. That’s a real important factor," says Ferdinand. "In theory someone could retain a weapon in a vehicle and at the end of school create serious damage in the parking lot. We just hope to be an additional tool to help in this entire process and we believe we have. We just need to be careful today as we look at all the dynamics."

The dogs who do best with Interquest Detection Canines tend to come from the sporting breeds like golden retrievers, Labrador retrievers and hunting dogs, though they've been known to work with a Heinz 57 or "pound puppy" along the way. The dogs pair up with different handlers and will go home with them at the end of the day. They're doing serious work but for these dogs it's all about the toys.

"They’re on a positive praise reward system," says Ferdinand. "They get to play esssentially with a toy every time they detect contraband." 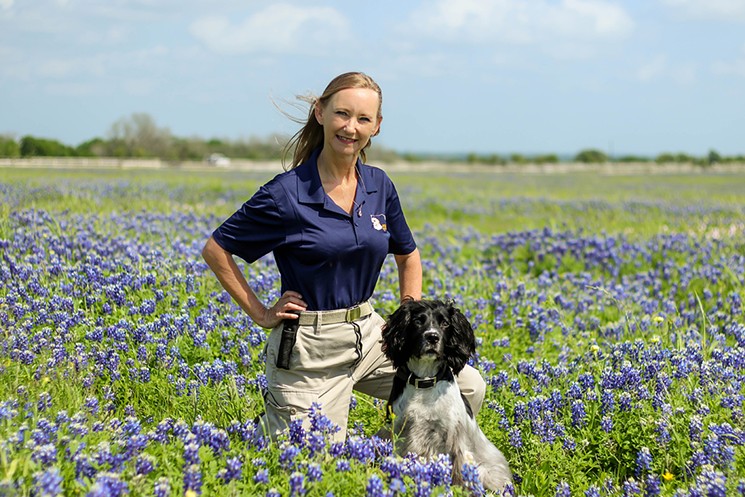 For more information about Interquest Detection Canines, call 281-320-1231 or visit interquestk9.com.
California Privacy Policy California Collection Notice
Do Not Sell My Info
Use of this website constitutes acceptance of our terms of use, our cookies policy, and our privacy policy The Houston Press may earn a portion of sales from products & services purchased through links on our site from our affiliate partners. ©2022 Houston Press, LP. All rights reserved.