Photo by Getty Images
Seeing something like this is enough to panic any hunter or pet lover. Learn how to protect your dog during the 39th Annual All Breed Desnaking Program, August 4-5, 2018.
Whether you mark the seasons as a hunter — doves in September, quail in October and ducks in November — or you've got a big enough patch of grass that snakes can be a slithery problem, everybody can agree that it's best for dogs to stay clear.

The venomous snakes we have to watch out for in Texas are the pit vipers: copperheads, cottonmouths (water moccasins) and rattlesnakes. Coral snakes also are a problem, but they've really got to gnaw on their prey to make an impact; for those just look at the bands and remember, "Red and yellow kill a fellow."

The Gulf Coast German Shorthaired Pointer Club keeps things going with these annual classes that are open to all breeds, and times the program during the pre-hunting season to prepare dogs for working in the field.

"We handle it not only for work dogs but for pets," says Gene Moseley Jr., past president and a director with the club. "One third of the dogs we do are pointing breeds, one third are retriever dogs, and one third are anything from great dane to chihuahua." Which means the program is for all dogs. 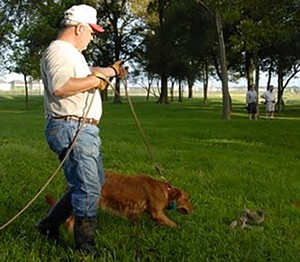 Some dogs get really close, others keep their distance.
Photo courtesy of Gulf Coast German Shorthaired Pointer Club
Dogs are outfitted with a shock collar and begin the course with their owner and a controller who works the collar.

"The first snake we use is a diamondback rattlesnake. We tape the rattles so there’s no sound; they have to come in and see it but more so smell it. The dog will get to a point, maybe one foot or 10 feet, the dog will stop and hesitate and that is the hesitation before they decide to pounce or leave it," says Moseley.

Sometimes the snake will strike out, sometimes not, but either way the dog receives the negative response from the e-collar and associates that bad feeling with the snake.

"We’ll take him to the next snake, what we consider the hot snake. He’ll have a rattle. [The dog will] hear it from 20 yards away. Whether curious or hesitant, he’s already concerned," says Moseley. We’ll reconfirm that [negative response] on that snake.

"After we’ve done that on those two snakes, both of those are quality connections. We’ll bring the owner of the dog on one side, the other side the dog handler, and we’ll ask that owner to call the dog," says Moseley. "That dog will make a complete big circle around that snake."

All dogs behave differently. For some, the e-collar can be set to level one, which basically just gets their attention. The collars have six different grades and Moseley says for avoidance training you want a higher dose.

"The dog is basically teaching himself. He makes the decision. We have dogs that almost try to kill the snake, and you can hold the shock collar down for as long as ten seconds," says Moseley. "The dog is already, 'I don’t want to have anything to do with it. That’s all I need.'" 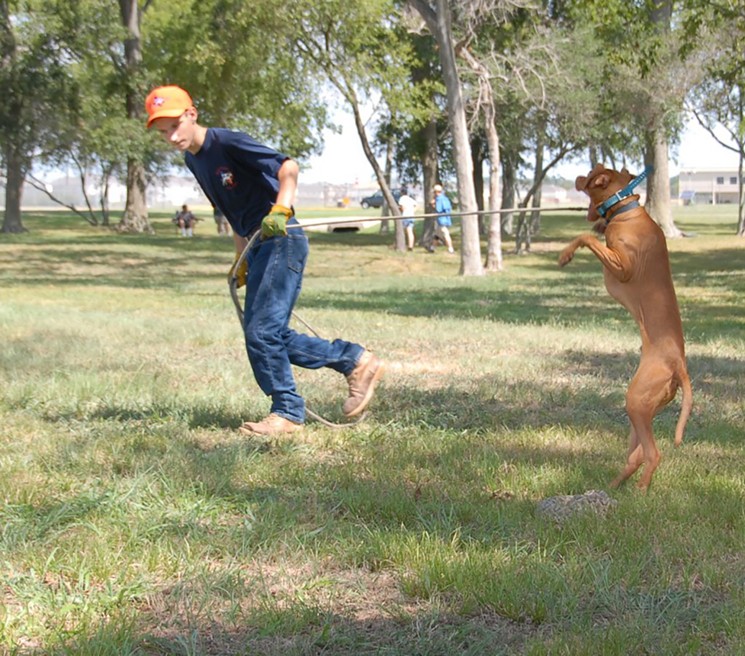 This dog already has learned that he doesn't want to be anywhere near that snake.
Photo courtesy of Gulf Coast German Shorthaired Pointer Club
Moseley knows the program has saved lives. "Every year we get people that come back and tell us, 'I set my retriever for retrieve and he wouldn’t bring it back. He wouldn’t bring it back, and when I went to look a snake was eating the bird. Oh my God it works.'"

He admits there are some dogs that can't be trained, especially those who are so set on pleasing their master that they will subvert their own instincts. He's seen it with dogs who are devoted to protecting the house or zone, as well as the truly devoted.

"Some dogs they want to please so much that they don’t really think for themselves. They don’t really use their nose, their eyes, their brain," says Moseley. "They think, 'If you want to heel, let’s heel.'"

The snakes, which are anywhere from three and a half to five feet in length, are well cared for and protected from the dogs, which might not be true with other programs. "They sew up their mouths, some will put them in cages, they do different things," says Moseley about the less scrupulous snake handlers.

The desnaking class is first-come, first-serve, and Moseley says Sunday is less busy than Saturday. They've got a nice area at the West Houston Airport with some shade and picnic tables, with places to stake your dog, making for a nice community event with not too long of a wait.

While your dog won't have any trouble spotting a snake, you might not be able to find the training at West Houston Airport. The staff suggests inputting "West Houston Lakeside Airport" into Google for an updated map.

The 39th Annual All Breed Desnaking Program is scheduled for 7:30 a.m. to 1 p.m. August 4-5, West Houston Airport, 18000 Groeschke Road, 713-545-7315 or 281-413-0514, facebook.com/Gulf-Coast-German-Shorthaired-Pointer-Club-126188837451203, $50.
California Privacy Policy California Collection Notice
Do Not Sell My Info
Use of this website constitutes acceptance of our terms of use, our cookies policy, and our privacy policy The Houston Press may earn a portion of sales from products & services purchased through links on our site from our affiliate partners. ©2022 Houston Press, LP. All rights reserved.