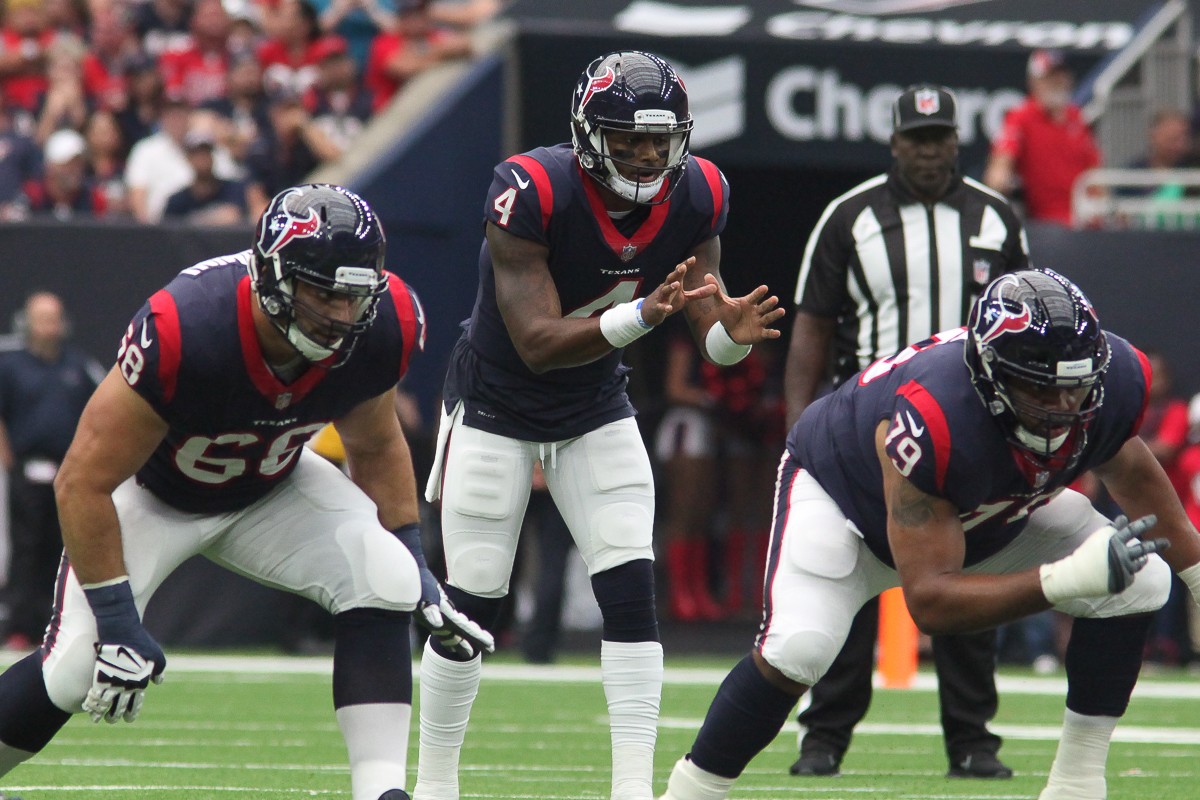 Photo by Eric Sauseda
The signing of Jeff Allen (right) was a mess from practically the very start.
The financial ecosystem in the NFL can be a strange thing. With a rookie wage scale depressing salaries for players in their first four seasons, the majority of the money required to be spent under the salary cap winds up going to veterans in free agency. Some of those veterans are worthy of their newfound riches and some aren't, and the almost-forced overspending in free agency naturally leads to a slew of buyers' remorse and free agent busts.

If we are putting a list together of Texan free agency busts, while no one will ever crack the Brock Osweiler glass ceiling, his fellow 2016 free agent signee, guard Jeff Allen, will wind up being fairly high up that list, as the Texans made it official on Friday — the Jeff Allen Era is over:


When I saw this news on Friday, here were my initial three thoughts on what was a largely unsurprising transaction by the Texans:

1. Brandon Brooks is probably laughing somewhere right now.
If you recall, it was Brooks whom Allen was signed to replace. Brooks managed to find himself an $8 million per year, multi-year deal with the Eagles, while the Texans signed Allen to a four year, $28 million deal. As it turns out, from what we now know, Brooks probably never wanted to come back here, after he disclosed a month or so ago that Bill O'Brien's coaching style almost drove him to retirement. (Whatever, Brandon.) That said, Brooks is now a Pro Bowler and Allen is unemployed, so the whole sequence definitely has that "Glover Quin-Ed Reed" feel going on, in which the Texans made a bad signing to replace a guy who realized his Pro Bowl potential elsewhere.

2. This essentially closes the books on the Texans' 2016 free agency class, which may have scared Brian Gaine into his conservative approach this offseason.
There was so much fanfare on that early March day in 2016 — Brock Osweiler, Lamar Miller, Jeff Allen, Tony Bergstrom. There were press conferences for all of them, and we all (well, most of us, anyway) felt great that there was a potential franchise quarterback, an explosive running back, and suitable replacements for Brandon Brooks and Ben Jones in that class of free agents. As it turned out, Osweiler was a laughingstock, Miller has been pedestrian, and Allen and Bergstrom are both gone. Bergstrom didn't make it through one season as a Texan. This class was the cookie cutter case of NFL free agency, where its like buying a boat — the best two days of owning a boat (or an NFL free agent) are the day you buy it and the day you get rid of it. It also makes you wonder if the failure of the overspend in that 2016 offseason was in the back of Brian Gaine's mind after what some would categorize as a conservative approach by Gaine in his first round of free agency as the Texans' general manager.

3. The pieces of last year's malpractice lesson in offensive line assembly are practically all gone now.
2017 was a painful year to watch Texans' offensive play, to the point where I don't know if I can go back and watch any of 2017, even for research purposes. I think I'd rather be forced to watch myself in a sex tape than watch Breno Giacomini play right tackle for even one snap. So now GIacomini and Xavier Su'a-Filo are both gone, off to minimum contract riches with the Raiders and Titans, respectively. Now, Allen joins them on the outbound train. The excavation process of the worst offensive line in team history is almost over. Thank God.