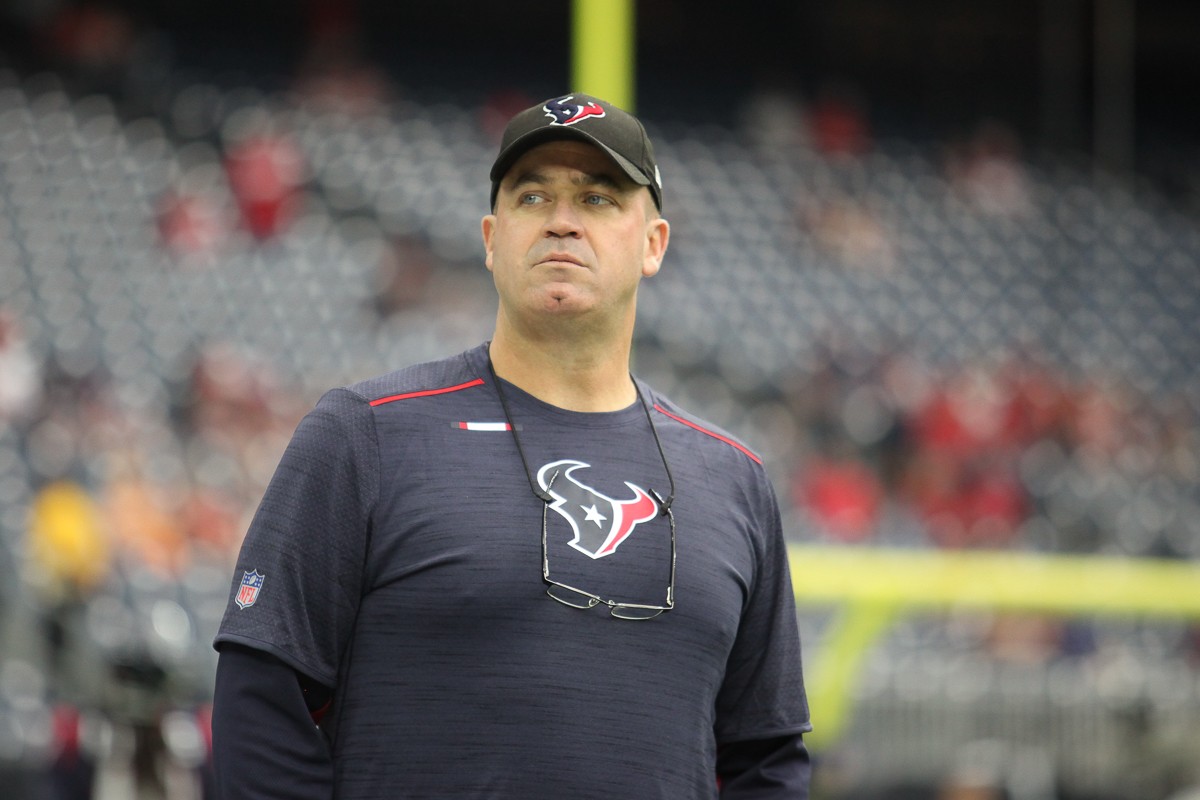 Photo by Eric Sauseda
Bill O'Brien has some exciting new potential toys on the offensive side of the ball.
Despite the fact that the Texans are nearly two weeks into training camp, you'd be surprised how limited the opportunities are for players who aren't locks to make the 53-man roster to make an impression on the coaching staff. Between the mandatory off days and the inclement weather limiting the use of pads last week, if you're a back of roster trying to flash for the coaching staff, well, good luck.

However, in the four practices I saw while in West Virginia last week, there were a few players with whom I have a newfound football love. A couple of them are probably locks to make the team, a couple are battling for a spot, and one is a coach. So without further ado, here are five "camp crushes" i came way with from my time at Texans training camp last week:

5. SEANTREL HENDERSON, OL
There is not doubt that, on a side of the football full of unproven commodities, the most unproven area of the offense is the tackle position. Left tackle Julien Davenport has two starts to his name, and right tackle  Henderson has spent more game time suspended over the last year than he's spent actually playing. If Henderson were to make it truly all the way back from Crohn's disease nearly ending his career, it would be remarkable. The former No. 1 high school player in the country is a mountain of man who has given J.J. Watt a solid sparring partner in drills so far. I am more optimistic about the right tackle spot now than I was before the start of camp.

4. JORDAN THOMAS, TE
Of the many, many tight ends that the team has in camp, Thomas is the one that passes the "eye test" most easily. Like Henderson at tackle, Thomas is a massive individual, a 280 pound beast. Thomas catches the ball very fluidly for a man of his size, which shouldn't be a huge surprise considering he started his career as a wide receiver at Mississippi State. As a sixth round pick, Thomas is likely to make the team and might make an even bigger impact than his fellow rookie tight end, third round pick Jordan Akins.

3. BRAD SEELY, ST coach
It's no secret that the Texans' special teams, over the course of O'Brien's time as head coach (and really predating his arrival by a couple years, as well), have been the absolute worst in the league. They get nothing out of the return game, and the kick coverage has been a sea of poor tackling and dumb penalties. Honestly, if it weren't for Shane Lechler's punting and Jon Weeks' perfect long snapping, there would be literally nothing to discuss positively on special teams. However, this offseason, the team not only invested in some better special teams personnel, but they also brought in Seely from Oakland. A 30 year veteran of the NFL coaching game, Seely runs a tight practice, to the extent that you can clearly see and feel the teaching that's going on during the special teams portions of practice.

2. SAMMIE COATES, WR
There will certainly be some tough decisions made at the back end of certain positions on this roster, and wide receiver is one of those positions. The Texans picked up Coates off the waiver wire from Cleveland a few months back, and he has shown well early on in camp, demonstrating an ability to get open down the field in drills early last week. Coates definitely looks the part, and he will likely be battling a few players at other positions for one of the final few spots on the 53 man roster.

1. TROYMAINE POPE, RB
Right now, with D'Onta Foreman on the PUP list, there are snaps to be had at running back, and the short-but-stout Pope has been taking advantage of the opportunity. When I was at camp, they used Pope quite a bit as a receiver out of the backfield, and it would not shock me if the Texans slated him for a role in their backfield similar to guys like Shane Vereen, James White, and Dion Lewis have held in the backfield for the Patriots the last few years.

BONUS CRUSH —  All this shade thrown at all of the former Texans QB's
A video bonus for you here, I loved Hopkins declaration at the end of this video, where he reminds us that basically every non-Watson QB he's been dealt has been poor at playing football....