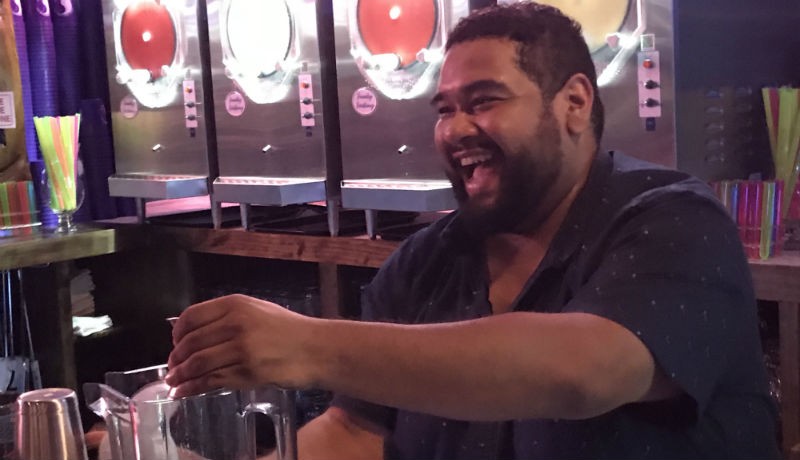 Photo by Kate McLean
The only thing frosty about bartender Frankie Saenz are the drinks he serves up.
"This is my favorite bar, they treat you like family," Ozzy Hernandez, guitarist for local Deathcore band, Await the Desolation, said as he described the time he found a glass of water and a po'boy in front of him instead of another drink...and how the next time he came in he was welcomed back with open arms. Ah, the occasional caregiving part of the bartending gig.  Frankie Saenz, with his boyish smile and hearty laugh, has compassion for his patrons.

At Voodoo Queen Daiquiri Dive, where "all butts are welcome," to look around and see a biker club playing pool, college students ordering shots, and industry people peppered throughout; this neon watering hole is exactly what it says. Two rows of daiquiri machines pump vigorously as if they were powering a freight train while brightly lit air hockey tables quietly clack from winning scores.  With nothing past 1998 on the jukebox, Voodoo Queen takes you back to the days of running around the local roller rink arcade.

Along with the nostalgia for people who actually remember the '90s, daiquiris like Sun Tan Lotion and blended drinks like The Lazy Islander, make this joint a must visit no matter the season. Saenz describes their bar program as a little bit craft and a little bit dive. Because of the diverse crowd it attracts along with the family of bosses and co-workers that's been cultivated, Saenz is happy working on the Voodoo crew. "All of us are really good friends as well as teammates, we understand when it's time to get busy and when it's time to play."

The Lazy Islander perfumed with a smoldering cinnamon stick.
Photo by Kate McLean

In addition to blending up concoctions in the Second Ward, he also serves as a house manager for the Hobby Center for the Performing Arts. That job entails orchestrating the flow of the crowd, making sure the show starts on time as well as managing volunteers.  With the thoughtful camaraderie Saenz shares with those around him, it's no surprise he was nicknamed Cruise Director Julie, or CDJ for short, by friends long ago.

Born and raised in North Houston, after graduating high school in 1994, Saenz began as a host at a Pappas restaurant which turned into a serving and then a bartending gig six months later. The Cheesecake Factory took note of his service and recruited him away.  Of the handful of bars he's worked for over the years he says at Cheesecake he learned the most. Though he usually had "normal" day jobs, he would always pick up a shift or two during the week. "I like talking to people, I like listening to their jokes and all that good stuff."

In his late twenties and most of his thirties Saenz worked for a large bank in Portland. "It was great money, great stability, however, you lose your soul." He was front and center during the Mortgage Crisis and remembers his home being egged, people screaming at him in grocery stores or drinks whizzing past his head at bars. Enough was enough and Saenz left to bartend full time. Moving back to Houston three years ago, it's clear he's found a happy home at Voodoo.

Interestingly, Saenz notes, "I've got a bit of OCD, which I think all bartenders do, it helps us keep clean. I've counted 98 times I've heard Purple Rain played, with Toto's Africa right behind at 94." Ten minutes later and the tell-tale beginning to Africa came on the loud speaker.  He looked up, "95."

Blend and garnish with toasted coconut and a flaming cinnamon stick. Watch out for the brain freeze, they are very real.

Shot of Advice: I was once lost in a dust storm at Burning Man in the Nevada desert when out of the dust an old hippie was kind and flagged me into shelter. We hunkered down during the storm and talked in his dome for hours. It was there he told me this which I have adopted for a life mantra, ‘Stop expecting things in life from others. Expectation of another human is an intention that leads to disappointment and heart break. You cannot expect anything from anyone. The only being you can place expectation on or from is yourself.’

Gather your buddies pau hana for some daiquiris, bra.
Photo by Kate McLean
Voodoo Queen Daiquiri Dive is open every day from noon to 2 a.m.
California Privacy Policy California Collection Notice
Do Not Sell My Info
Use of this website constitutes acceptance of our terms of use, our cookies policy, and our privacy policy The Houston Press may earn a portion of sales from products & services purchased through links on our site from our affiliate partners. ©2022 Houston Press, LP. All rights reserved.