Photo by Kate McLean
Bert Garay wears his smile all the time.
And just like that after a positive first interview, Bert Garay was roped back into the industry. Yee-haw.

While having spent the year prior teaching kids how to swim as well as coaching a soccer team on the east side of Houston, Garay says there was something about the place, something about owners Ana Beaven and Charlie McDaniel that felt right. After all, 'Cuchara,' which translates to 'spoon' in English is the friendliest of all utensils. That was five-and-a-half years ago.

The neighborhood bistro that collects die-hard regulars is famous for celebrating Mexican culture in creative ways. In fact, this Friday they are throwing themselves their sixth birthday party to be themed after the number six, "the number of imperfection in man's work…implying it's the devils number." Calling all those who've ever felt a little bit mischievous in the p.m., this event is not to be missed. Regular Richard Baker comments, "[Ana] knows how to throw a party, and they just get better and better."

While studying Biochemistry and Computer Engineering Technology at the University of Houston, Garay's first taste of restaurant work was waiting tables at Iguana Joe's.  He quickly transitioned to the bar three months later. Now, he works as a jack of all trades at the crypto mining start-up FTW Mining, while still logging hours at Cuchara, the restaurant that for him, has grown into a family, a home. He states, "I love this place."

Raised in Zacatecas, Mexico, Garay and his family moved around a few times before settling in Minneapolis, though he finished his senior year of high school here and considers himself a Houstonian. He likes going out to watch local sports like the Dynamo and Astros, and also enjoys our diverse restaurant and bar scene. "One of the biggest tools we have as bartenders is going out to a place and watching other people work."

Garay now manages the bar and likes how owners Beaven and McDaniel push him out of his comfort zone to create reverse happy hour concoctions and special event pairings. Interaction with guests is one of his favorite parts of the job other than working alongside his coworkers. 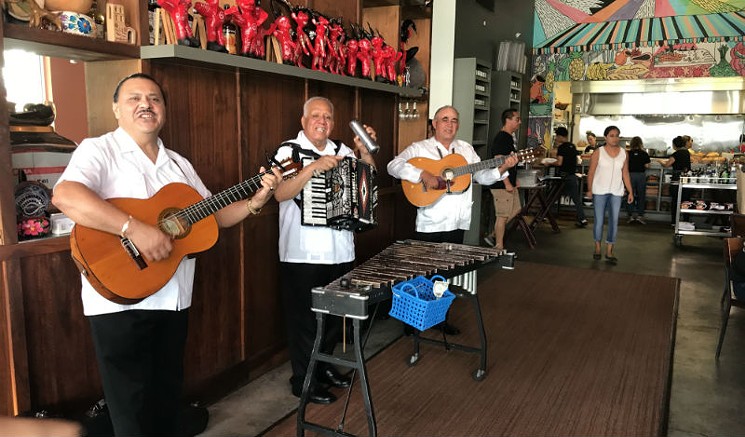 Cuchara has plenty of fun Micheladas to taste, but perhaps next time try this off-the-menu classic. Garay explains, "Mexico is so regional, but if you say, 'I'd like a petroleo' or, 'classic michelada' or, 'michelada del jefe,' usually this is what they'll give you."

This drink has everything anyone could ever need. The Maggi seasoning brings a soy sauce saltiness that, mixed with classic michelada components, makes you wonder what you've been ordering this whole time. There is literally no occasion not to drink a Michelada Petroleo.

Coming in from a dusty trail ride: Michelada Petroleo.

Shot of advice: Always stick to what you like. And everything in moderation.  If only somebody had told me that when I was younger.  I mean they did, but (laughs.) 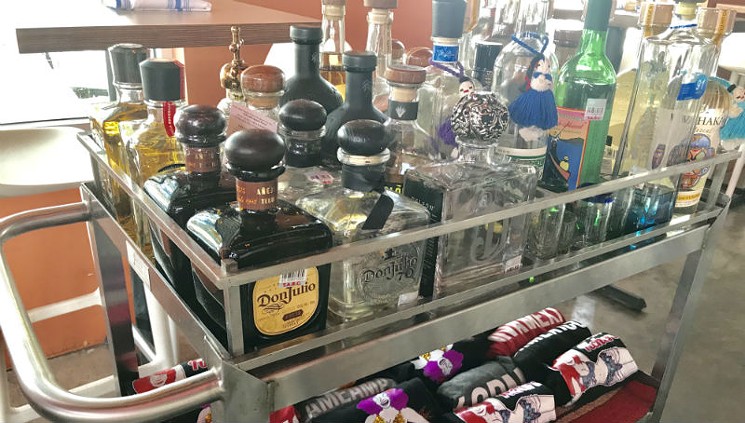 The Agave cart also brings the party.
Photo by Kate McLean
California Privacy Policy California Collection Notice
Do Not Sell My Info
Use of this website constitutes acceptance of our terms of use, our cookies policy, and our privacy policy The Houston Press may earn a portion of sales from products & services purchased through links on our site from our affiliate partners. ©2022 Houston Press, LP. All rights reserved.