Royal fever is upon us again, but this time it's not our collective nation watching a pomp and circumstance wedding across the pond. In a major partnership with the National Portrait Gallery in London, the Museum of Fine Arts, Houston is exhibiting 150 objects — many never before seen outside England — in "Tudors to Windsors: British Royal Portraits from Holbein to Warhol."

It's an expensive undertaking, with insurance and indemnity policies out the kazoo, and the traveling exhibit will only make one other stop in Australia. For the Houston show, "Tudors to Windsors" is supplemented by MFAH holdings, though the Aussies won't get to see the MFAH objects. 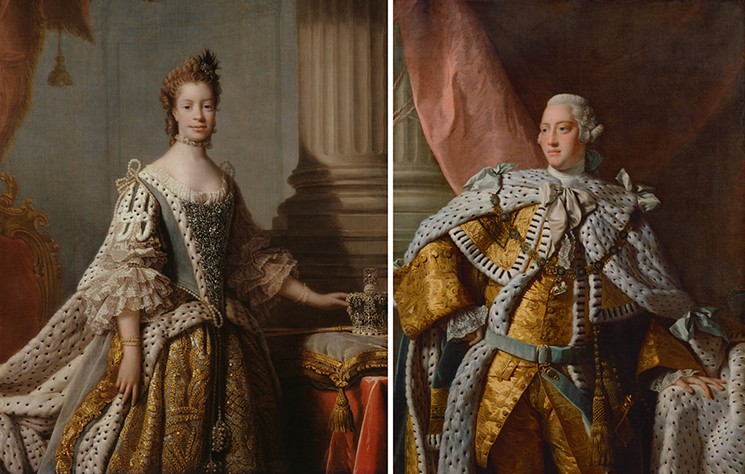 Not all kings and queens actually liked each other, leading to exile or beheadings, but theirs was a love match. (L) After Allan Ramsay, Sophia Charlotte of Mecklenburg-Strelitz, 1761–62 and (R) After Allan Ramsay, King George III, 1761–62.
© Photos by National Portrait Gallery, London, courtesy of Museum of Fine Arts, Houston
Walking through the second floor of the Caroline Wiess Law Building, history literally comes to life as we gaze upon opulent, bedazzled visages wearing the most expensive garments imaginable: ermine, beads, crowns, tiaras, brocade, silk, gems and jewelry.

The exhibit begins where medieval England ends, marking the beginning of the modern era when Henry Tudor defeated Richard III in 1485 to become King Henry VII. Room by room we explore the four royal dynasties: the House of Tudor (1485–1603), the House of Stuart (1603–1714), the House of Hanover (1714–1901) and the present-day House of Windsor.

It's remarkable how often fate — or human machinations — have changed the course of history. Not having a successor opened the throne fairly often, as did being the wrong religion (Catholicism was out and Protestantism was in), and more than a few beheadings. The Execution of Lady Jane Grey by Paul Delaroche. This 1833 painting of the "Nine Days Queen" is romanticized and fictionalized; the exhibit also includes an Elizabethan depiction of the real Lady Jane Grey.
© Photo by National Gallery London, courtesy of Museum of Fine Arts, Houston
Poor Lady Jane Grey was prodded, cajoled and brought to London to sit on the throne as the next Protestant monarch in 1553. Her reign only lasted nine days because Mary Tudor mobilized her forces and ejected the English noblewoman. Deemed too much of a threat, Grey was beheaded in the Tower of London in 1554. The magnificent Delaroche painting (shown above) was thought to be lost during WWII. Decades later it was discovered rolled up among some carpeting at London's Tate Gallery; it has now been cleaned and restored and has become one of the most popular paintings in the National Portrait Gallery.

Interesting tidbits to be gleaned throughout the exhibit: King Henry VIII wasn't always fat and mean; as a younger man he was handsome, athletic and enjoyed jousting. Queen Anne, the last of the Stuarts, was pregnant 17 times but none of her children survived to ascend to the throne.

King Charles II had 15 children, all of them illegitimate. We see one of his mistresses with a slight wardrobe malfunction; Eleanor "Nell" Gwyn bore him two sons, was the toast of court life and was the first woman to act on the public stage. A portrait of Barbara Palmer (née Villiers), another of his mistresses, resembled so much the Madonna and child that it mistakenly hung in a convent for years.

Queen Victoria, the "Grandmother of Europe" found excellent matches for her children with Christian IX (King of Denmark), uniting Prussia (Victoria), United Kingdom (Albert Edward), Germany (Alice, Helena and Leopold), Russia (Alfred), Scotland (Louise), Sweden (Arthur) and Spain (Beatrice), only to find her children at war with each other during WWI.

In Houston, the exhibition is curated by Dr. Louise Stewart, Curator of Sixteenth-century to Contemporary Collections at the National Portrait Gallery, London, and co-curated by David Bomford, Chair, Department of Conservation, and Audrey Jones Beck Curator, Department of European Art, MFAH. 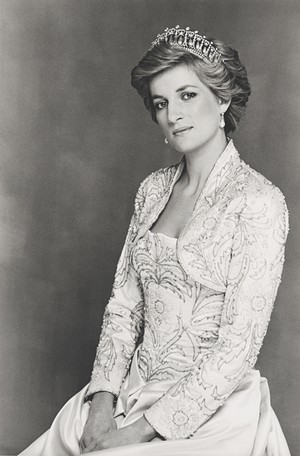 Diana, Princess of Wales, 1990, by Terence Donovan.
Photo by Terence Donovan © Terence Donovan Archive, courtesy of Museum of Fine Arts, Houston
The final segments of the exhibit, "The Windsors," "Monarchy in the Modern Age" and "A New Generation," portray the royal family that we've become fascinated with all our lives. In 2015 Queen Elizabeth II became the longest reigning British monarch, in a healthy place with three generations of successors to follow. During the media preview of this exhibit, MFAH's Bomford pointed out that the British monarchy has often been in peril, but that they also have the genius for self reinvention, quite unlike Austria's Habsburg Empire that became extinct in 1918.

Yes, you'll see ethereal photographs of Diana, Princess of Wales (the People's Princess), though rendered in a "once removed" black and white treatment with the exception of three color photos taken with Charles, Prince of Wales. We didn't spot Fergie or Andy at all but Meghan Markle, now Duchess of Sussex, made the cut with a small photo taken at the Royal Ascot racing meeting. Most disturbing of all is a holographic lenticular print by Chris Levine, Queen Elizabeth II ("Lightness of Being"). Each exposure took eight seconds and she closed her eyes at one point, which is the photo that Levine selected for the final piece, but it comes across as a post-mortem photograph.

"Tudors to Windsors" is part of MFAH's larger program of examining the history of the modern era through art, coming on the heels of 2015's “Habsburg Splendor: Masterpieces from Vienna’s Imperial Collections,” and the just closed "Peacock in the Desert: The Royal Arts of Jodhpur, India."

As for our style predictions this fall? You'll find those fascinators, clutches, baubles, Wellies and even bearskin hats a la the Buckingham Palace guards in the museum's gift shop.