Photo courtesy of Bar Crawl Nation
Bar Crawl Nation is bringing us a Halloween Bar Crawl that swings through Clutch, Daisy Duke's, Lincoln Bar, Standard, Handlebar, Kung Fu Saloon and Concrete Cowboy.
If you think you've spotted a Kevin Hart lookalike in the bars and clubs this weekend, it might not be a doppelgänger. The most famous stand-up comedian in the world is in town for a two night run of his Irresponsible Tour. The tour's title might be a reference to last year's admission of infidelity, but he's not the only one behaving badly. We've got spankings over at the fetish-friendly Erotic Ball, trucks getting smashed at Monster Jam and some '90s throwbacks with Bar Crawl Nation. But how to atone for all those sins? Become one with the universe with yoga, cool vibes and other free spirits at YOUniverSOUL Fest.

Hart Nation's stop at Toyota Center on Friday night is sold out, but tix are still available for Kevin Hart's Saturday show.
Photo courtesy of Universal Pictures
Hopefully Kevin Hart didn't down too many hurricanes during Thursday night's stop in New Orleans. We want him on top of his game for back-to-back shows at Toyota Center as his Irresponsible Tour swings through Texas. It looks like Friday's already a sell-out (though you know the drill with after-market tix) and you can still get in to Saturday's show. Expect to hear his thoughts on the Trump administration, personal screw-ups, and anything else that strikes his fancy. Hart is most likely the biggest stand-up comedian in the world at this point, so it's his way or the highway. A word to the wise: cell phones must be turned off and out of sight, or the big bad bouncers will walk you right out that door and onto the street. 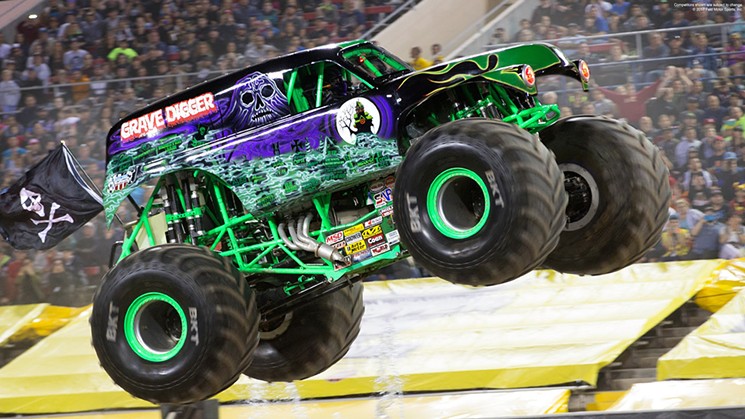 VIP experiences include a truck ride around the competition track that will be displayed on the big screens.
Photo courtesy of Feld Entertainment
You'll find discounts on tickets at participating Great Clips, Chick-fil-A and Metro by T-Mobile stores. Uber-fans will want to pony up extra for upgraded tickets to the Monster Jam® Pit Party, the pit party early access pass, or even a chance to ride a monster truck and see it broadcast on the big screens. 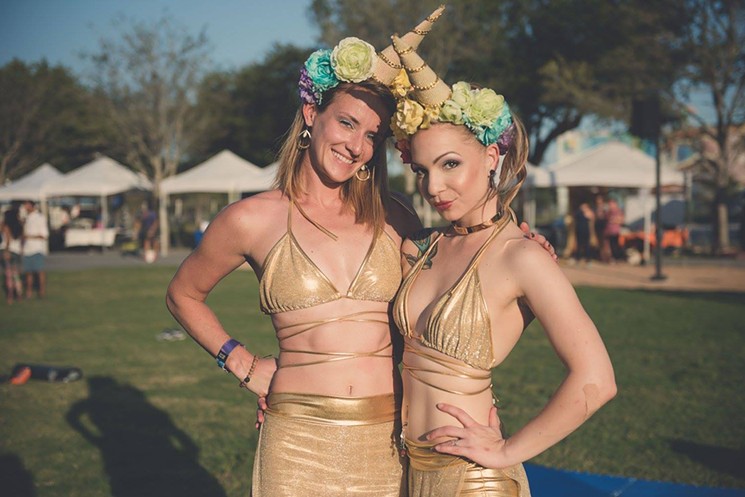 Discover yoga, music, art and bliss when YOUniverSOUL Fest comes to Midtown Park this Saturday.
Photo courtesy of UserOfReality
Find your happy place at YOUniverSOUL Fest this Saturday, a conscious movement to awaken the soul of the city. There's music to feed your soul, art for unleashing creativity, and a chance to move and groove with other like-minded people. In the red tent discover opportunities for sexual and emotional healing plus a Goddess Kali workshop. Dig deeper in the Empowerment Hall with classes on self-care, consciousness, menstrual flux, chakra balancing, sacred geometry and living with purpose. Get a henna tattoo or a massage, stop by the meditation station, and discover the many variations of yoga: Ashtanga, Black Swan, Four Dragons, Pralaya, Acro, Tibetan and Buti. After all, people who flow together, grow together.

Bar Crawl Nation, the folks who brought us the Totally '90s groove, are at it again with a Halloween Bar Crawl.
Photo courtesy of Bar Crawl Nation
Bar Crawl Nation is known for its Totally '90s groove with throwback costumes, music and plenty of booze. But now it's time for "boos!" when the crawlers take a Halloween lap through H-Town. Download the app, check in at Clutch, then enjoy haunted drink specials at Daisy Duke's, Lincoln Bar, Standard, Handlebar, Kung Fu Saloon and Concrete Cowboy. They've got prizes for best solo, duo and group costumes, professional photography and giveaways at every bar. Halloween Bar Crawl ends at 10 p.m., but that's when the after party begins.