Photo by Peter Molick
Come learn more about Round 48: "Beyond Social Practice" when Project Row Houses hosts a block party with live music and yoga on Saturday, October 13, from noon-7 p.m.
Feeling stressed about 24/7 technology or worried about pharmaceutical consumption? Stop by artist Lisa Harris's "House of Practice" installation at Project Row Houses to unplug from social media, chill out with some calming colors, and learn how to "just say no" to Big Pharma.

Harris is one of seven artists participating in Round 48: "Beyond Social Practice" at the shotgun-style Art Houses on Holman. An artist from New Orleans, jackie sumell, hopes to call attention to the fact that 80 percent of incarcerated females are mothers by inviting visitors to plant seedlings and share pictures of that plant's transformation with those mothers through a prisoner-support app.

Stop by Tia-Simone Gardner's "The Black Power Station" for a listen to century-old out-of-print books by authors of African descent, or find common ground in any of the installations by artists Tatyana Fazlalizadeh, Armina Mussa or The Design Studio for Social Intervention. 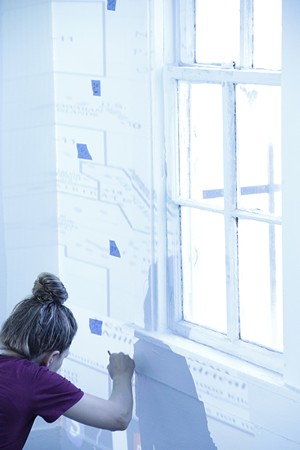 Artist Dawn Weleski working on "Noon at Night."
Photo courtesy of Project Row Houses
For delicious food that makes you think globally, stop by Dawn Weleski's pay-what-you-can bakery titled "Noon at Night." Weleski and co-director Jon Rubin have really made some waves up in Pittsburgh with their Conflict Kitchen that serves cuisine from countries with which the United States is in conflict.

Conflict Kitchen has shed light on our country's conflicts with Iran, Afghanistan, Cuba, North Korea and Venezuela, but this time Weleski is sharing her knowledge about the Haudenosaunee Confederacy and how they're trying to preserve their non-GMO heirloom crop that dates back almost 1,400 years, while Monsanto tries to gain ownership by planting crops near enough to cross-pollinate with the heirloom brand.

Weleski's "Noon at Night" will evolve and continue to ramp up throughout its run. "Up until Thanksgiving it will be open every Wednesday through Sunday, noon to 5 p.m., serving Iroquois Confederacy white roasted corn bread wrapped in interviews," says Ryan Dennis, PRH's Curator and Programs Director, about the conversations Weleski and Rubin had with enrolled members of the six Haudenosaunee nations.

Dennis says the project will build into a few iterations. "There is going to be a programming of the bakery every week on Friday beginning in December cohosted by international partners regarding conflicts that have been experienced in different locations," says Dennis.

Once the bakery is fully realized, and with a twist on the all night drive-through, Weleski's "Noon at Night" will open up when the sun goes down, allowing customers to video conference with customers in other cafes around the world when their clocks strike noon. "That’s done with the partnerships that we’re building right now. Through her work with Conflict Kitchen, working with other countries, she has a number of relationships already established," adds Dennis.

For the opening on October 13, PRH will offer Artists’ Talks from noon to 2 p.m. as well as a block party, which continues the tradition of the community gathering to commemorate a new Round of installations. The Artists Talks will offer attendees the opportunity to hear from the artists about their individual practices and the inspiration behind their installation.

At the block party, guests can celebrate the Round 48 opening through a series of live performances from local artists Eimaral Sol, The Afroknotts, Marcus Ardoin and Da Zydeco Legendz, Marium Echo, Tim Woods, and Undergravity; family-friendly games and activities, including ZooMobile from the Houston Zoo; free Yoga with Letty classes; food and shopping for goods from local entrepreneurs. PRH’s block parties have a long and rich history for celebrating art and African-American history and culture.

There will be a health fair on-site with vendors speaking about and offering services on areas such as sickle cell, adult and childhood diabetes, HIV, spinal and mental health, and the need for minorities to donate blood. Legacy Community Health will be providing screenings for diabetes, blood pressure, BMI, pregnancy, HIV and syphilis, as well as giving educational presentations.


Round 48: "Beyond Social Practice" is scheduled for October 13-February 17, open noon-5 p.m. Wednesdays through Saturdays, 2505-2517 Holman, 713-526-7662, projectrowhouses.org, free.
California Privacy Policy California Collection Notice
Do Not Sell My Info
Use of this website constitutes acceptance of our terms of use, our cookies policy, and our privacy policy The Houston Press may earn a portion of sales from products & services purchased through links on our site from our affiliate partners. ©2022 Houston Press, LP. All rights reserved.