Photo by Kate McLean
Potstickers make a great snack for the troops.

The next morning, like a zombie, I crawled out of bed, grabbed a fork, and began finishing off what remained in the jar of Spicy Chili Crisp and the last of the potstickers. Seriously, what the hell did they put in this stuff?

That SCC won't let me be.
Photo by Kate McLean
Moments later while reading the ingredients— oh, I get it.  Real quick, let's address the stigma surrounding MSG.

For the record, the FDA is cool with using monosodium glutamate as a "flavor enhancer." Essentially, it's an umami shortcut that has been shown to "excite" neurons in the brain. However, because some people reportedly experience side effects like headache, nausea, and weakness (there are more), it gets a bad rap. MSG doesn't affect a lot of people. But as someone who it does affect, I still enjoy it, I just find out after the fact.

Whelp. MSG you got me again.

99 Ranch Market is a great store to get lost in. Their selection of condiments and packaged delights is immense. Bags of potstickers can range from $4 to $14, and they offer several two-fer deals. Dumplings, Shumai, Baozi, Xiaolongbao, can also be found in two separate freezer aisles. Vinegars, oils, pastes, row upon row, brand upon brand, flavor upon flavor, this store is a great place to load up on freezer and jarred essentials. Last visit, I chanced on some Spicy Chili Crisp, which brings us here today. 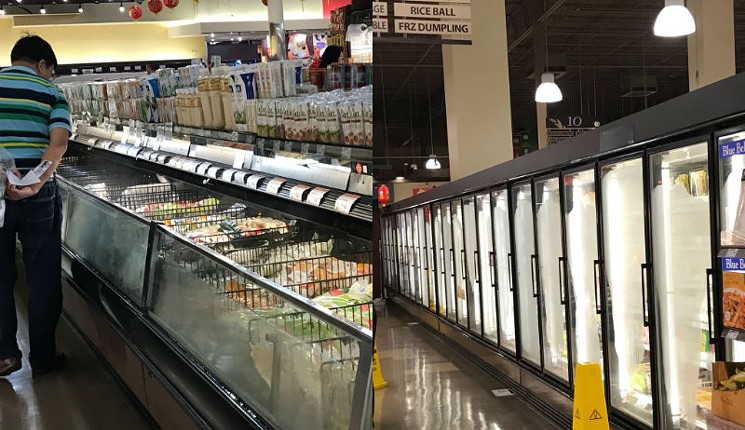 Every aisle is fun to explore at 99 Ranch Market; here are where the frozen dumplings are stored.
Photo by Kate McLean

The combination was so addicting that in one sitting between three people we crushed two bags of potstickers and almost the whole jar of Spicy Chili Crisp. Hoisin was involved too, but really it was the generous spoonfuls of SCC over golden brown potstickers that had me breaking out the backup freezer bag. It felt like we were driving the rainbow road level in Mario Cart. It's-a-go!

Spicy Chili Crisp grabs you first with the scent; toasty and savory. The lingering Szechuan peppercorn-esque tingle tempts taste buds into craving more and more, which in this case, went into the next day. Even two days later we were STILL reminiscing.

KS: "Also, where in Chinatown did you get that sauce, it is crack, I need it, lol."

Cooking dumplings or potstickers doesn't have to be daunting. Chances are you have everything you need already.

Bring the water to a boil and season with salt; depending on the pot add 10-12 potstickers. They'll want to stick to the bottom, but don't let them! Once they slowly float to the top, strain and toss with a little oil. They will still feel raw, but that's okay because you're going to finish steaming them in the pan.

Get a cast iron or non-stick pan hot with vegetable oil so it's slightly smoking. Slippity-slide those 'stickers in and arrange them flat side down. Lift the handle of the pan creating a 60 degree angle, it will protect you from oil splatter. Cook on medium-high heat, and let them slowly brown while covering with a lid. The direct heat will sear on one side while trapping enough steam to cook the other side. You don't even need to flip them. Paper towel dry, throw them on a platter, and attack.

Make sure you are fully clothed when cooking potstickers; not necessarily a beekeeping suit, but at least a T-shirt, because sometimes the oil will spit.
California Privacy Policy California Collection Notice
Do Not Sell My Info
Use of this website constitutes acceptance of our terms of use, our cookies policy, and our privacy policy The Houston Press may earn a portion of sales from products & services purchased through links on our site from our affiliate partners. ©2022 Houston Press, LP. All rights reserved.