Photo courtesy of Chipster PR
Patrick Myers channels Freddie Mercury in the singer's iconic yellow military-style jacket.
Easily one of the most iconic, dynamic, and unique vocalists in the history of rock and roll, Freddie Mercury fronted Rock and Roll Hall of Famers Queen for just over two decades until his 1991 AIDS-related death. So it comes as a surprise – even to Patrick Myers – that Patrick Myers has embodied Mercury onstage now for 25 years in Killer Queen, arguably the best Queen tribute band in the world.

And to think it all started out as kind of a lark when Myers and some of his college classmates studying music and theater at Goldsmiths, University of London, decided to do a handful of shows in 1993. Mainly because they were all fans of the band and never got a chance to see the real deal live. Patrick Myers tweaks the show all the time.
Photo courtesy of Chipster PR
“It’s crazy. Tribute bands didn’t even really exist when I started. The idea that I could do this for 25 years never even crossed my mind. It’s surreal, and it’s turned into quite the journey!” Myers says over the phone from his English home.

And in 2018, tribute acts carry much of less of stigma to music snobs then they maybe did before as the original artists retire, cut down on touring, or pass away.

“I think so many changes have happened in the record industry with legacy artists. People want that communal experience in a live concert. You can have 5,000 friends on Facebook and still be alone, but to be in a show with 5,000 people singing ‘We Will Rock You,’ that’s something much more.”

Killer Queen has gotten so big, in fact, that in 2009 they began selling out the exact same arenas in Europe that the real Queen did during their heyday. Still, Myers is not doing the same show the same way all the time, noting that he’s “constantly tweaking” his voice and stage mannerisms to be Even More Freddie. And above all, he’s a huge fan of the man he portrays.

“Every time I listen to a Freddie Mercury song, I hear something new. And on YouTube, you can even hear the isolated vocal tracks. But you never stop absorbing,” he says. He’s knows that while the spotlight may be on him, there are three other players (none still from the original lineup) that play hugely important roles as well.

“Any band is only as good as their weakest link, whether it’s Queen or anybody else. You can’t have a blinding Freddie and a so-so Brian [May]. Or a lackluster Roger [Taylor] but a great John [Deacon]. There’s a spotlight on Freddie, but Queen was a whole band.” Joining Myers on tour in 2018’s Killer Queen are Simon Small (guitar), Brian Waissman (bass), and Jon Howells (drums).


Myers says they’ll be playing all the band’s best known hits – what people come to hear – like “Another One Bites the Dust,” “We Will Rock You/We Are the Champions,” “Tie Your Mother, Down,” “Crazy Little Thing Called Love,” and of course, “Bohemian Rhapsody.” But he adds that there’s about 20 minutes they get to play around with some of the deeper cuts. Myers cites songs like “It’s Late,” “Nevermore,” “The March of the Black Queen,” and “Mother Love” as ones he’s like to eventually perform.

“Queen were kind of unique. They could embrace what was going on around them,” Myers says, speaking to the music’s longevity. “They had a signature sound that transcended any particular time. It was quite magical. And the quality and diversity of their songwriting, and they all wrote, pulling in different directions. It sounds fresh. ‘Under Pressure’ could have come out today.” 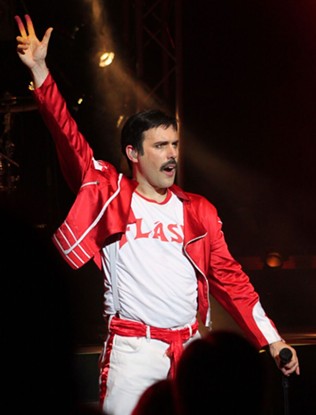 Keeping the mustache going on stage.
Photo courtesy of Chipster PR
Myers says he’s seen Queen + Adam Lambert play in recent years, and thinks it’s a great show. His own bookings often get a bump when that lineup goes on tour or, say, when the Queen-based jukebox musical We Will Rock You came out.

He expects another flurry of attention with the release of the Queen/Freddie Mercury biopic Bohemian Rhapsody next month. And from what he’s seen on trailer, he thinks that the end result will be exciting and actor Rami Malek as Mercury is going to do “an amazing job.”

“There’s a great story in there about Freddie’s life that doesn’t really surface when people focus on his onstage persona and the fact that he had a few wild parties. He had his struggles,” Myers says.

“Being gay wasn’t really allowed in the American rock circuit at the time they were trying to break in America, so there was that. Then all that he had to go through when he had AIDS. It was a tough life, but a fantastic life.”

Finally at least onstage and in promo photos and videos, it’s plain to see that Patrick Myers is a dead ringer for Freddie Mercury. Asked if he gets double takes out in public, he says that’s a lot of smoke and mirrors. That you could go see Killer Queen in concert and an hour later stand next to him in an elevator and not recognize him.

Still, you’ve gotta give him props in one department – that distinct Freddie Mercury mustache is real. So one final depth of music investigative journalism must be plumbed– even with Myers paying overseas phone rates. And that is: What does he do to maintain that glorious work of follicle foundation hirsute perfection?

“Maintain it? I find not shaving it and then cutting it slightly when it gets too long. I don’t know how radical that comes across!” he laughs. “But I don’t sport one when I’m not touring. I’m pleased to see my face again. Luckily, I’ve got one of those faces that grows beards and mustaches really, really quickly.”