The Arctic Monkeys won't overwhelm you with their live performance.

That's not to say they'll underwhelm you either. You'll probably leave perfectly content with what you saw and heard. It's even more likely that you'll find yourself humming the band's incredibly catchy hooks and riffs as your make your way out of the venue.

But there isn't much to the band's live show, not in any way that would grab headlines these days. It doesn't incorporate a grandiose light show like Muse or theatrical anthems like Green Day, but it's as tight as any modern-day rock outfit, if not more so.

Categorized as a combination of indie and garage rock, the English quartet turned Revention Music Center into a gigantic carport Friday night. With only a nominal light show and a fog machine aiding their act, the Arctic Monkeys kept the near-capacity venue entertained for nearly 90 minutes. The minimalism made it feel like we might be in a friend's garage, watching a seriously talented group of locals wail on their instruments.

On tour in support of their sixth studio album, Tranquility Base Hotel + Casino, the Arctic Monkeys began their set Friday night with "Four Out of Five," which served as an advertisement for the fictional lodging and gambling den on the moon that inspired the album's name. Afterward, they launched into "Brianstorm," an 11-year-old heavy rock anthem that ran shorter than three minutes and sounded ten times louder in person. 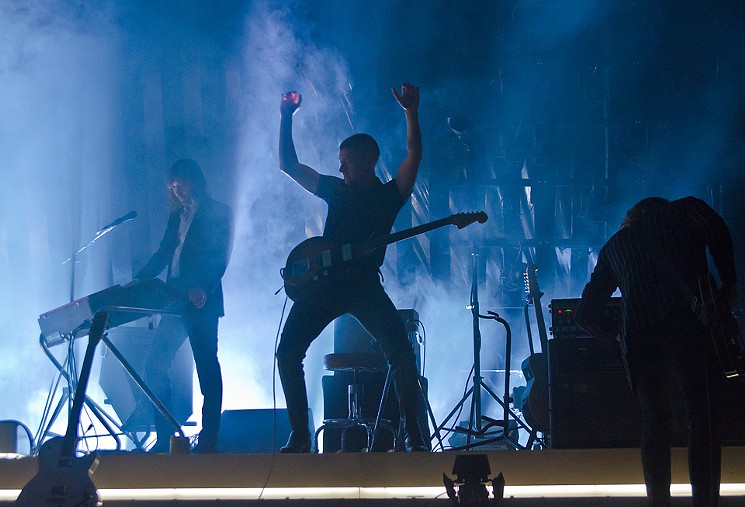 Turner shaking his tailfeather
Photo by Christi Vest
About halfway through their set, the band performed "You're So Dark," in which vocalist Alex Turner dropped his guitar and, shifting back and forth between falsetto and warm baritone vocals, sang of a raven-haired woman who brought to mind the likes of H. P. Lovecraft, Edgar Allen Poe and Dracula himself.

Somewhere in the crowd, a goth was swooning.

The band's newer cuts weren't as well-received as their hits, but given that Tranquility Base was released a mere five months ago, there's a chance that fans haven't had a chance to learn all the words yet. Then again, its concept — a luxury resort on the moon — may have been just a bit too much to abide, even for longtime fans.

Older cuts like "Why'd You Only Call Me When You're High," "Don't Sit Down 'Cause I've Moved Your Chair," "Cornerstone" and "I Bet You Look Good on the Dance Floor" were the highlights of the evening. That probably came as a disappointment to the group, which seems determined to explore new terrain, but it's hard to complain when you're surrounded by nearly 2,500 screaming fans, even if they're more interested in your early work.

SET LIST
Four Out of Five
Brianstorm
Snap Out of It
Crying Lightning
Library Pictures
505
Tranquility Base Hotel + Casino
Why'd You Only Call Me When You're High?
Sketchead
You're So Dark
Don't Sit Down 'Cause I've Moved Your Chair
I Bet You Look Good on the Dance Floor
One Point Perspective
Cornerstone
Knee Socks
Batphone
Cigarette Smoker Fiona
Pretty Visitors
Mad Sounds