Photo by Zach Tate
The search for Miss Lone Star Rally 2018 has been heating up all fall, with prelims at your favorite dealerships and venues. One of the largest bikini contests on the Gulf Coast comes to a head Saturday night when the winner is announced.
Bikes, bands and bikinis are transforming historic Galveston into a motorcycle wonderland with this weekend's Lone Star Rally. Closer to home we've got anime-style cosplay at Insomnia, a zombie apocalypse disguised as a 5K, the 15th anniversary of Doomsday Wrestling and a leisurely bicycle ride past Houston's best murals and graffiti. Keep reading because most of these events are free. 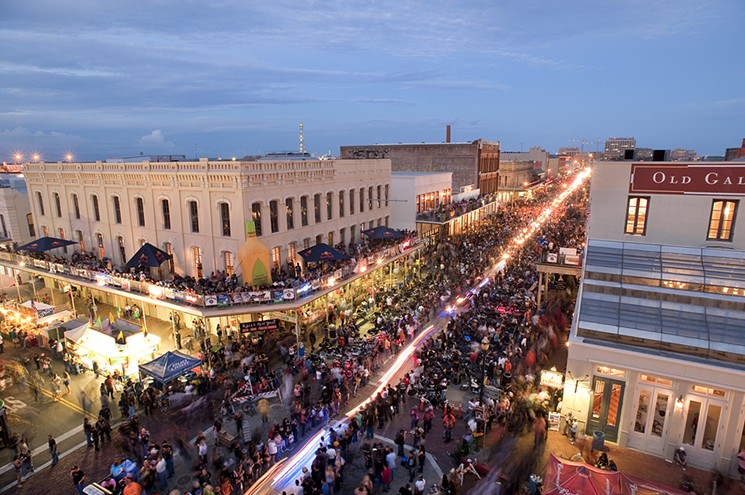 Just in case you were wondering about the magnitude of this event. An estimated 450,000 visitors are headed to Galveston this weekend for Lone Star Rally.
Photo courtesy of Galveston Convention & Visitors Bureau
Props to the organizers at Lone Star Rally for booking both Mötley Crüe's Vince Neil (Thursday) and former Poison frontman Bret Michaels (Friday). But the party doesn't stop with free concerts on multiple stages. Before the weekend is over Galveston will have played host to bike events, car and truck shows, the crowning of Miss Lone Star Rally 2018, fishing trips, dolphin cruises and even a biker wedding or two. Highlights include the Perewitz Paint Show at the Hotel Galvez courtyard, the In Motion Invitational with some of the industry's top bike builders, and a viewing of the 1969 Dodge Charger "General Lee" of Dukes of Hazzard fame. So whether you're daytripping from Houston or want to embrace the full LSR experience, it's all going down this weekend in Galveston. Insomnia Gallery has hosted a Maid Cafe at its previous location, but this will be its first Anime No Seikatsu: An Anime Art Show.
Photo courtesy of Insomnia Gallery
We're finally able to catch a break from summer's oppressive heat, which means any event at Insomnia Gallery is sure to spill out into the Tlaquepaque Market parking lot, turning it into a party under the stars. Insomnia is hosting its first ever Anime No Seikatsu: An Anime Art Show, with pieces by local artists, a cosplay contest, outdoor screenings of anime and food trucks. It's a dog-friendly affair, so put a maid's apron on Fido and come out to enjoy craft beer and cocktails from sponsor Eureka Heights Brewing Company.

Come cheer for your favorites, boo their opponents, and become part of history when Doomsday Wrestling celebrates its 15th year in the ring. At just 16 years of age, Charlene Lonestar already is a force to be reckoned with.
@ Photo by houstonshots
Doomsday Wrestling is celebrating 15 years of breaking bones — funny bones that is — proving that hysterical headlocks and hijinks are a winning formula when it comes to theatrical violence. They've already announced that shapeshifter Precious Jules will be stepping into the ring against sweet 16 wrestling protégé Charlene Lonestar. Can the Pink Menace defeat the Texas Mockingbird? Mr. Cuddles, Hot Flash, Milk and Cookies and The Chadster also are headlining this anniversary/birthday extravaganza combo. Hard core fans will remember that first ever Battle Royal match in 2003 at Helios (now Avant Garden), and the Houston Press was there to document it. The Doomsday folks figure those original wrestlers are either in prison or addicted to painkillers by now. So get your tickets soon for the best little wrasslin' show in all of Texas because violence has never been this funny.

Want to be a zombie? Come out a little early to get your make-up done by professionals then chase, terrorize and infect the runners as they try to survive the 5K obstacle course.
Photo courtesy of Zombie Charge Houston
Need a little encouragement when it comes to exercise? Experience the need for speed when the Mud 'N' Blood Tour comes to Houston with big challenges, infected zombies and more than 15 obstacles (think mud pits, creepy creeks and horror ridden hills). Zombie Charge Houston lets participants sign up as a runner or a zombie, which in our opinion looks much more fun. Whether you finish the race as a survivor or as part of the newly minted undead army, stay for the after party in the "safe zone" with live music, beer, food, games and contests.

EastEndBikeRide has organized a rolling tour of our favorite murals and graffiti.
Photo by David Sanchez Photography
Graffiti, beer and tacos are some of our favorite things, and we'll enjoy all three during EastEndBikeRide: Houston Mural & Graffiti Ride #6. It's a 15- to 20-mile cycling stretch that explores graffiti, murals and public art with midpoint stops at Saint Arnold Brewing Company and a taco truck. Meet up at D&W Lounge, one of the coolest dive bars around, then cycle out at a social pace for this rolling art tour. Pro tip: bring water, sunscreen, mosquito spray, camera, cash and a spare tube in case you get a flat.