Who Knew the '80s Pop Scene is Thriving in Houston?

A short year later at Day for Night’s 2015 inaugural outing, Children of Pop frontman Chase DeMaster takes to the festival stage donned in an oversized white jumpsuit. Backed by two vocalists and a DJ, he covers deep Madonna cut “Physical Attraction” in its original key with shameless flair.

Without announcement, a mid-decade resurgence of 1980s inspired pop music began a quiet simmer in, of all places, Houston, Texas. Now in 2018, a growing roster of '80s tinged acts finds itself at a soft boil despite, or perhaps in part to, its own changing landscape.

BLSHS and Children of Pop disbanded, but respective lead vocalists Miears and DeMaster carry a veteran torch with new projects in a now burgeoning scene. Day for Night left a gaping hole in the local music ecosystem following its founder’s alleged sexual misconduct. After concert promoters Pegstar parted ways with Fitzgerald’s in 2015, the venue’s alleged racism and a recent change in ownership rendered the once sacred space irrelevant to a new crop of socially conscious pop artists claiming the '80s as their own.

But why are the sounds of the '80s reappearing in Houston? Many of these artists’ parents likely provided them with an '80s centric music education, instilling a love for the decade at an early age. Perhaps these musicians’ more immediate influences from the '90s and beyond took direction from the era, and now their artistic lineage manifests in this talent pool. The most plausible reason, however, is that these local acts are in the same room at the same time.

Houston’s new '80s crew frequently convenes in the deep heart of the East End at Satellite Bar, performing original sets and supporting their contemporaries. A rising star in its own right, the venue thrives as a centralized hub for the intricately woven network of artists and fans that constitute today’s scene.

Sinuhe Parraga, a super fan of the scene, regularly dances up storms at Satellite Bar. He says he loves the camaraderie among the local acts and prefers seeing them over marquee names. “They have great talent, they bring a show, they bring a personality to the stage, they bring almost a product that they want to present.” He says he notices how artists are using textures and aesthetics from the '80s to create “something a little more profound.”

Camera Cult lead singer Ricky J. Vasquez recalls the band’s early days at the Satellite Bar as he sips a cold brewed nitro at Montrose coffeehouse Black Hole. “We started playing Satellite Bar shows all the time before it was Satellite Bar. It was like some hole in the wall dive bar. Not even a dive bar, it was just a shack.” Since playing on that stage once lit by construction lights, the trio’s star burns brighter than ever.

Delivering dance heavy anthems stacked with memorable hooks is Camera Cult’s specialty. This Friday they’ll bring their New Order influenced ear candy to Satellite Bar’s newly constructed outdoor stage to rally for Beto. Their political stance earned them some social media backlash, but they brush it off. “We support who we support. I mean as long as you go out and vote, just do it. We’re looking for Nike sponsors,” says Vasquez. Political activism is only the tip of the iceberg when it comes to the scene’s social cognizance. 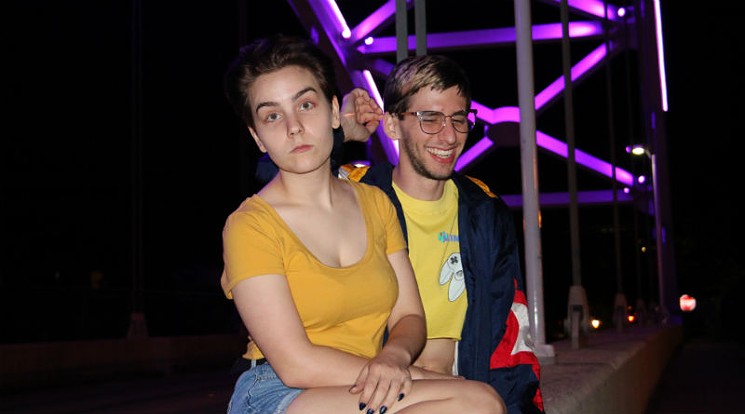 Though rare for a pop act to set its sights on anything other than music so early in its career, intergalactic duo Space Kiddettes’ vision remains clear. In 2017, Trent Lira and bandmate Devin Will launched Drag Queen Story Time at Freed-Montrose Library, establishing the duo as a force within the LGBT community. “When we figured out this is what Space Kiddettes is, we’ve always thought of it as a brand. Not just a band. It’s a lifestyle. It’s things that we believe in,” says Lira. Will adds: “We want to be able to open this experience up to all sorts of people.”

Last month they released a workout-themed music video for their single “Low Impact Aerobics” in support of their upcoming Domestic Adventures EP. The video builds on their communal mindset. Backed by an army of friends, “Aerobics” is a visual feast harking back to Olivia Newton John’s “Physical.” Given the tight knit nature of the scene, it’s little surprise to find fellow '80s-laced artist Attila Mosely, known as Attxla, breaking a sweat alongside Space Kiddettes. 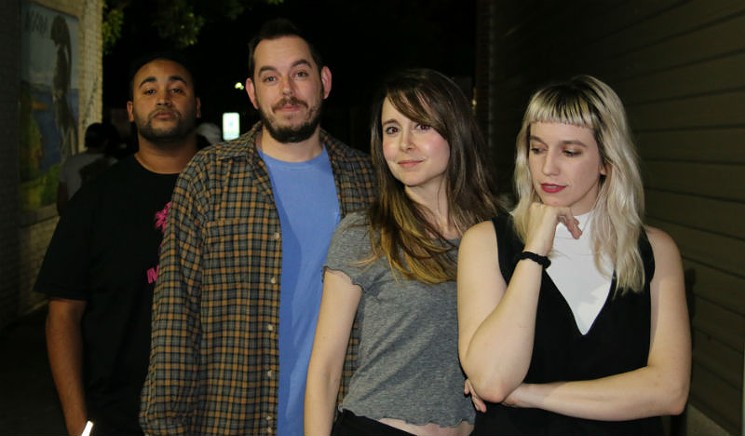 (l-R) Attila Mosely (Attxla), Chase DeMaster, Michelle Miears (MIEARS), Teresa Vicinanza (Tee Vee)
Photo by John Amar
Outside of Agora coffeehouse, Mosely casually wears a MIEARS T-shirt while sitting next to Michelle Miears herself. Clearly a fan of his musical peer, he sips from her now communal glass of red wine. Moments later, he mistakenly swigs from a different glass belonging to Teresa Vicinanza of Tee Vee, another local '80s-flavored powerhouse. Given the artists’ overlapping musical influences, it rings symbolic that they drink from each other’s cup. Their music calls on Depeche Mode with ethereal vocals and almost haunted soundscapes.

It’s in these dimly lit sonic corners that they find catharsis, turning their musical output into a mental health conversation piece. Mosely says he makes music to heal and find love within himself. Vicinanza says she finds confidence and self-control in her creative process. Miears’ uses synthesizers to extinguish flames from her past, aptly titling her forthcoming 2019 LP Moving On. “There are many days where I’m just like, this hurts. Why do I do this? For me, success is just continuing every day.”

Children of Pop’s Chase DeMaster agrees with Miears’ tenacity from across the table. He details the work ethic of each act contributing to the scene, noting how most Houston artists juggle day jobs with the task of being creative in their remaining time.

You can catch Attxla at Pearl Bar on Thursday, October 25; Camera Cult at Satellite Bar on Friday October 26; DeMaster’s current project Get A Life at Axelrad on Saturday, October 27; Space Kiddettes at White Oak Music Hall on Tuesday, November 6; MIEARS at Rockefeller’s on Friday, November 9 and Tee Vee on Saturday December 8 at Rudyards.
California Privacy Policy California Collection Notice
Do Not Sell My Info
Use of this website constitutes acceptance of our terms of use, our cookies policy, and our privacy policy The Houston Press may earn a portion of sales from products & services purchased through links on our site from our affiliate partners. ©2022 Houston Press, LP. All rights reserved.