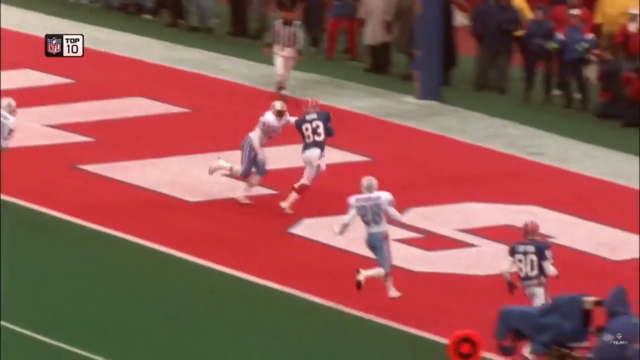 Screen grab from YouTube
Not all Oilers memories are good ones, but the in-season signing of Webster Slaughter certainly is.
When the Texans traded for wide receiver Demaryius Thomas this week from Denver, most of the interest was centered on what the veteran wideout can do for this Texans team, particularly in the wake of the season-ending injury to Will Fuller. But for Houston sports fans, it might conjure up some memories. In this case, memories of a former Houston football team and an in-season move they made to acquire a talented wide receiver.

That team was the Houston Oilers and the player was Webster Slaughter, who the team signed four games into the 1992 season. Slaughter remained in Houston for two seasons joining a potent run-and-shoot offense, but also going through some of the most tumultuous periods in any pro franchise's history, let alone Houston. That included the "the Comeback" — or, as we call it in Houston, the Buffalo game — the suicide of one player, the controversy over another staying home from a game for the birth of a child, a defensive coordinator punching an offensive coordinator during a game and a horrible playoff loss to Kansas City after reeling off 11 straight wins in the regular season.

If you aren't old enough to remember this, try to keep it in mind when you are mad about a rough season for the Rockets, Astros or Texans.

But, Slaughter's signing was rather abnormal from the very beginning. Prior to 1992, he had played five seasons with Cleveland and is still fondly remembered as one of that organization's best wide receivers. The last three years for the Browns, he averaged over 60 receptions and four touchdowns, which was a lot that era of the NFL. In 1989, the first of two Pro Bowl seasons, he had 65 receptions, six TDs and over 1,200 yards receiving. The next year he went to the Pro Bowl was 1993 as a Houston Oiler.

Unlike Thomas, however, Slaughter was not traded here. The NFL did not have what we consider free agency today. Teams had much greater control over player movement and could restrict where they played. But in the summer of 1992, a suit was filed against the NFL alleging the league's version of free agency at the time violated the league's antitrust exemption. Players wanted to be unrestricted in their movement once their contracts were up, something commonplace today.

The courts ruled in favor of the players, but did not strike down the NFL rules and allow players complete freedom. However, four players including Slaughter went before the court and were granted a five-day window to sign with other teams in a relaxing of the rules. Slaughter, who was holding out for a new contract with the Browns, signed a two-year $2.2 million contract with the Oilers and joined them for week six (one week after their week five bye) against the Cincinnati Bengals.

Slaughter finished that year starting nine of the 12 games for the team. He had 39 catches for 486 yards and four touchdowns. He also had a TD catch in the Buffalo game, he only reception that day.

This year, Thomas joins the Texans for the final eight games of the season including this Sunday against his former team, the Broncos. While Slaughter joined to continue building a prolific offense in Houston, Thomas comes in as a short-term solution after the loss of Fuller. He will certainly have more responsibility than Slaughter, but he has similar support in Deandre Hopkins, perhaps the best wide receiver in football.

Hopefully, Thomas's stint with the Texans will be close to as successful as Slaughter's was with the Oilers...minus the Buffalo game.
California Privacy Policy California Collection Notice
Do Not Sell My Info
Use of this website constitutes acceptance of our terms of use, our cookies policy, and our privacy policy The Houston Press may earn a portion of sales from products & services purchased through links on our site from our affiliate partners. ©2022 Houston Press, LP. All rights reserved.