5 Best Bets This Weekend in Houston: Scrooge, King of Pop and an ArtCrawl

Photo by T. Charles Erickson
Ghastly apparitions do a death dance in the Alley Theatre's production of A Christmas Carol – A Ghost Story of Christmas.
There's nothing traditional about the holidays here in Houston. We've got a staging of A Christmas Carol that just might shock English author Charles Dickens, a Broadway-style musical tribute to Michael Jackson, a chance to wear that ugly Christmas sweater, and the last stop of the year for The Great Inflatable Race, a bounce-tastic obstacle course for the kid in all of us. We've also got the annual Art Crawl with looks at more than 150 artist spaces, including the doomed studio of David Adickes. 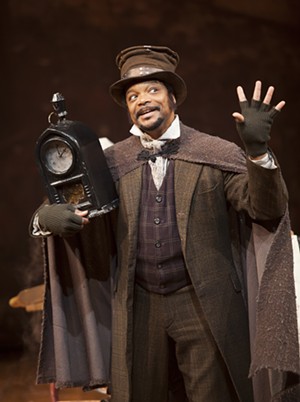 Shawn Hamilton reprises the role of Mr. Marvel.
Photo by John Everett
Even if political headlines are causing some grumbling, 'tis the season to leave the "bah humbugs" to Ebenezer Scrooge. We've got a new cold-hearted miser taking the stage in Alley Theatre's annual production of A Christmas Carol – A Ghost Story of Christmas. Interim Artistic Director James Black does double-duty as Scrooge while also directing the classic story about redemption and the spirit of the holidays. Jay Sullivan returns as the optimistic nephew Fred, as does Melissa Pritchett as the Spirit of Christmas Past, David Rainey as the Spirit of Christmas Present, Paul Hope as Fezziwig and Chris Hutchison as the overworked Bob Cratchit. The Alley first premiered this production in 1990 and recent performances have amped up the spooky, scary quotient. Still, it's appropriate for children as young as six, making this an excellent school field trip during the matinees.

Don't miss this King of Pop tribute act when Miller Outdoor Theatre hosts I AM KING – The Michael Jackson Experience this Friday night.
Photo courtesy of Miller Outdoor Theatre
Holographic concerts are still more novelty than mainstream and the closest audiences can get to the stellar legends from years past is through tribute acts. Only the truly talented who can moon walk, move and dance like the gloved one are chosen for I AM KING – The Michael Jackson Experience. Miller Outdoor Theatre's stage will be electrified in this Friday night concert filled with live music, dancers from Broadway and Las Vegas, and MJ's double singing hits like “Bad,” "Billie Jean,” “Thriller,” “Man in the Mirror” and “Human Nature.”

WHAM is more than an English musical duo from the '80s. Here in Houston, the Winter Holiday Art Market (WHAM) champions local artists and creative entrepreneurs to succeed in the business of art.
Photo by Getty Images
There's no shortage of ways to uglify a sweater. Add a carrot nose to a snowman, sew on a few awkwardly placed tassels, and press the button to make Rudolph's nose glow so bright. Bad attire is the main attraction at Fresh Arts annual "Ugly Sweater" themed Preview Party and Happy Hour, a ticketed event with open bar, light bites, live entertainment and first crack at shopping from more than 65 artists and makers, including paintings, sculpture, photography, jewelry, clothing and soap. Winter is finally here and the artful weekend continues Saturday and Sunday at the Winter Holiday Art Market 2018 with free entry, tax-free shopping, live music and even a selfie station, courtesy of the team at Station Theater.

Get ready to conquer or be conquered at The Great Inflatable Race with Volcano Escape, Castle of Doom, Train Wreck, The River and Big Baller.
Photo courtesy of The Great Inflatable Race
Remember how it felt when you got too tall for the bouncy houses at the carnival? Well somebody figured out that we're never too old for inflatables, and The Great Inflatable Race is closing out the season with one more day of jump-tastic fun in Houston. Each race has between eight and 10 massive inflatables for bouncing, bumping, climbing and sliding on custom obstacles. The race isn't timed or judged, so everybody's a winner and there are always a few zany costumes, like the solo racer who dressed as a dill pickle or the family who wore matching rainbow tutus. Upgrade to a VIP race ticket for access to the Inflatable Village for post-race fun on the Big Baller, the Gladiator Joust or the Bungee Run.

More than 150 artists are participating in ARTCRAWLhouston2018. Check the website for supplemental events, including a bike scramble that kicks off at FotoFest International.
Photo by Marco Torres
The wrecking ball hasn't yet come for David Adickes' studio on Nance — though it's looming on the horizon with the planned rerouting and expansion of I-45 downtown — but until that happens we can still check out some of his gigantic presidential heads at ARTCRAWLhouston2018. Ground zero is Mother Dog Studios, the oldest surviving warehouse in Houston, which also serves as headquarters for this daylong event that looks at 15 different artist warehouses downtown. Check out artist John Runnels current exhibition, "Body.Language," stop for a bite at Last Concert Cafe, then bike, skate, ride, hike and crawl your way to Hardy & Nance Studios, Michael Morton Architects, the original Silo Studios, Notsuoh, Harambee Art Gallery, JoMar Visions and more. Some studios also will be open November 18.

Select your transpo then bike, skate, ride, hike and crawl your way through some of downtown Houston's hippest art studios.
Graphic by Louise Schlachter
California Privacy Policy California Collection Notice
Do Not Sell My Info
Use of this website constitutes acceptance of our terms of use, our cookies policy, and our privacy policy The Houston Press may earn a portion of sales from products & services purchased through links on our site from our affiliate partners. ©2022 Houston Press, LP. All rights reserved.