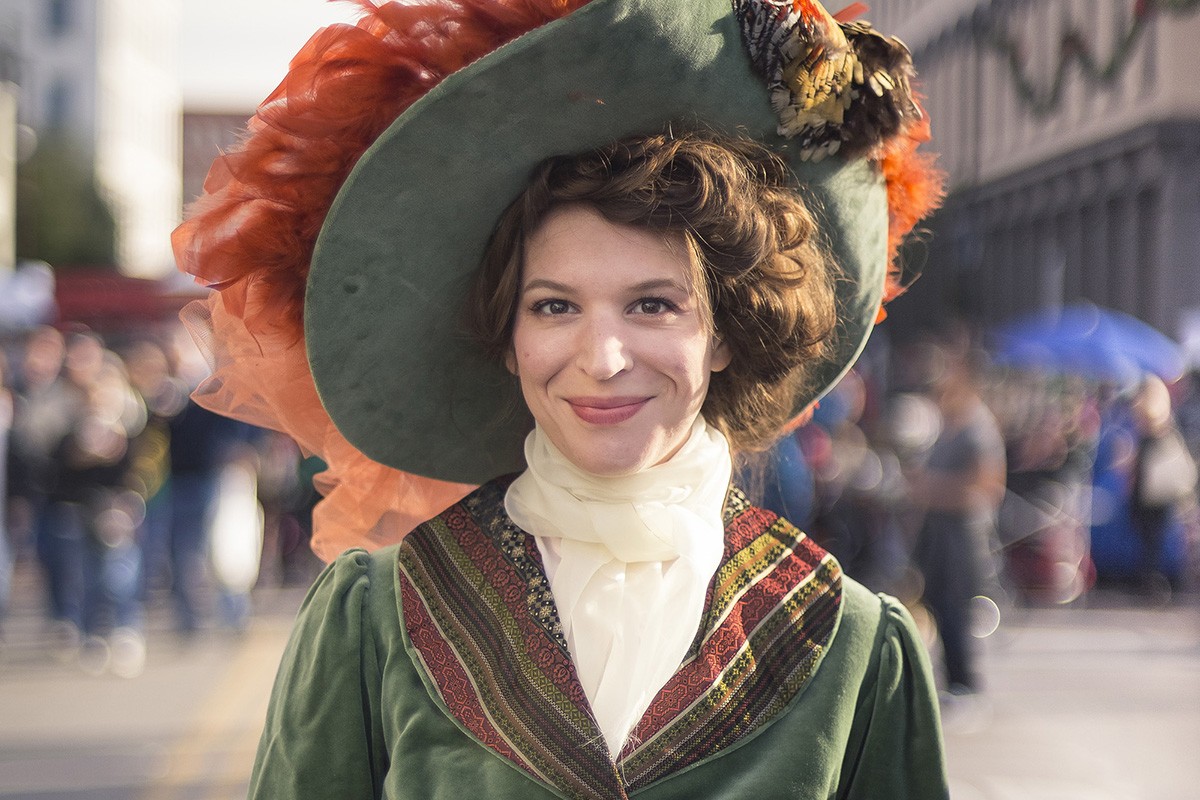 Photo by Illumine Photographic Services, courtesy of Galveston Historical Foundation
Wear a Victorian costume for half price adult admission at Dickens on The Strand, December 1-3. Hats are not optional.
The Dickens Victorian Bed Races are one of the most popular events at Dickens on The Strand, and it looks like the team from Tall Ship Elissa is the one to beat. The returning champs found glory again during last year's race, finishing at a very strong 59 seconds.

"Last year it had really turned into a big part of Sunday. Even if you’re not competing it’s a lot of fun to watch," says Will Wright, chief creative officer for Galveston Historical Foundation, adding that there's a lot of pre-race fun before the staggered starts. "The Tall Ship Elissa, they‘ve got a really fast bed. They’re our reigning champions."

Anglophiles and fans of the English writer Charles Dickens are always excited to hear which descendants will be making an appearance, and we'll see the return of Lucinda Dickens Hawksley (great-great-great-granddaughter) and Jane Dickens Monk (her father, Cedric Dickens, was the great grandson of Charles Dickens), as well as a new surprise.

It's been 20 years since Oliver “Ollie” Dickens came out to The Strand as a wee lad attending the event with his father, Mark Charles Dickens. "When he was coming before Ollie did a bit of a performance with his dad as Tiny Tim," says Wright. "Mark Charles is not coming back this year; he’s passed the top hat to Ollie."

Ollie (great-great-great-grandson of Charles Dickens) is now in his 20s and is a British actor with more than a passing resemblance to Robert Pattinson. He's hosting a brand new event, Dickens After Dark, an ultra private event at a secret location. "Ollie has a background in theater and acting and we’re really excited to capitalize on that. He’s going to be working on different, dramatic readings, not just A Christmas Carol," says Wright. (This event should fill up quickly.)

A top hat or broad-rimmed hat will do quite nicely.
Photo by Illumine Photographic Services, courtesy of Galveston Historical Foundation
It's amazing how much gets packed into the three-day Dickens on The Strand weekend, and Wright warns us that many of the special events will be sold out in advance. There's a champagne reception with the descendants, a soiree at Bishop's Palace, handbell concerts, breakfast with Jane Dickens Monk, a sunset happy hour on the Tall Ship Elissa, and walking tours with Saint Arnold Brewing Company.

RSVP early for any or all of those events but, even if you don't get in, there's still plenty to see and do. "Dickens on its own is a lot. We’ve got vendors, numerous different stages, programming throughout the streets," says Wright.

Returning visitors will notice that Galveston has really dialed up the Victorian theme for this 45th iteration. "We have invested quite a bit into the look and feel of the event. So guests this year will see brand new pubs, new decorations on our entrances, everything down to the way we set up trash cans," says Wright.

Insider tip: Wear a Victorian costume for half price adult admission. Even if you missed last month's amazing costume sale at Opera in the Heights, the Dickens on The Strand website has quite a bit of information about how to assemble your own authentic period costume.

Dickens on The Strand is scheduled for 5-9 p.m. November 30 (free admission), 10 a.m.-9 p.m. December 1, noon-6 p.m. December 2, The Strand, Mechanic Street and Market Street, Galveston, galvestonhistory.org/events/dickens-on-the-strand/dickens-on-the-strand-3, free to $15.
California Privacy Policy California Collection Notice
Do Not Sell My Info
Use of this website constitutes acceptance of our terms of use, our cookies policy, and our privacy policy The Houston Press may earn a portion of sales from products & services purchased through links on our site from our affiliate partners. ©2022 Houston Press, LP. All rights reserved.