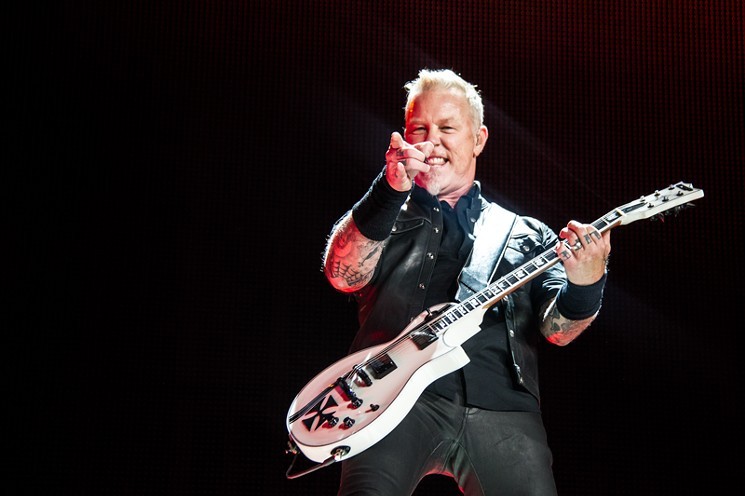 Photo by Violeta Alvarez
2018 Metallica is celebrating 1988 Metallica in a big way this year.
Art is a luxury. Perhaps it shouldn’t be, but capitalism does what capitalism does. With no say in what speaks to our soul, it’s all down to chance whether or not that which moves your spirit is within your financial grasp. Some can be fulfilled with the free days at their local museum; others have to hope that they can make do with what they can experience if they can afford internet in the first place. From sculpture to film, from watercolors to video games, the world is full art that can bring us to tears, if we’re blessed enough to afford it.

For better (if you’re a fan) or worse (if you’re a creator or label executive), music is more affordable than ever. CD prices slowed down their ever increasing prices around the turn of the century, streaming plans are at a price point that’s arguably too low and there’s a ton of music that you can stream for free via Youtube if that’s all you can afford at the moment. Music fans are in better shape than others when it comes to what we love, to a point where we almost take it for granted at times.

It has been interesting to follow industry trends as it relates to new technology. Remember when DVD players became things most owned, and suddenly everyone under the sun needed to put out a concert DVD or documentary? It seemed like every festival that existed, no matter how niche, put out a video release for a year or so in the early ‘00s. While concert specials are still produced and DVDs still hit store shelves, you’re more likely to watch the final product online than you are to hold a disc in your hand.

Which is why the continued production of box sets feels like a weird holdover from a different industry. If music sales are not as strong as they once were, why put all the money and effort into sets that are more expensive and thus likely to sell even fewer units? But this year, in particular, has been a for box sets from some of the biggest and most important names in music, and more than anything it’s access to these box sets that make me more thankful than ever for streaming media.

David Bowie’s most recent box set, 2018’s Loving the Alien, is an eight-disc collection of his work circa 1983 to 1988, costing just under $119 if you want the CD set. While I have no doubt that there are plenty of Bowie fans out there willing to plunk down that kind of cash, there are far more of us who, pre-MP3, pre-streaming, would never hear what this set had to offer — unless our local library was just super cool — because the idea of paying $119 up front just makes our hands shake with uncomfortableness. But today, right now, I’m literally ten seconds away from hearing it at any time I want thanks to cell phone networks and a Spotify subscription.
Last week, Metallica released what might be the best set of the year. The ...And Justice For All Remastered Deluxe Box Set is a treasure trove that lets fans see how the album evolved from riffs on a cassette tape to a heavy metal masterpiece. To just buy the MP3s — there’s no CD version of the eight-disc set as far as I can tell — would cost $110; a small price for some but dozens of meals for others. Is it essential listening? No, but I can’t think of a single release that’s given me more joy in the last five years. From “Harvester of Sorrow” appearing in early versions of “Blackened” and “Dyer’s Eve” to a version of the record where you can kind of, sort of, hear the bass, it’s something that fans of the group will go over the moon for, if they’re lucky enough to hear it.

Streaming services aren’t perfect. Artists should get paid more than they do. But as long as they’re going to keep taking my $10 every month, I’m still going to be on board because music is the thing that moves my spirit. Selfishly, I’m glad to live in an era where interesting, in-depth releases aren’t out of reach thanks to the contents of my wallet. The golden age of streaming music won’t last because these things never do, so enjoy it — and all the box sets — while you can.
California Privacy Policy California Collection Notice
Do Not Sell My Info
Use of this website constitutes acceptance of our terms of use, our cookies policy, and our privacy policy The Houston Press may earn a portion of sales from products & services purchased through links on our site from our affiliate partners. ©2022 Houston Press, LP. All rights reserved.