The Alley Theatre Presents A Christmas Carol Once Again 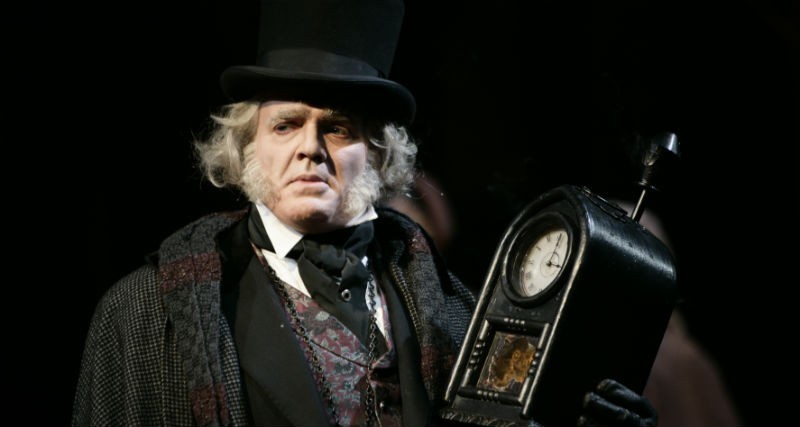 Photo by Lynn Lane
Actor and director James Black as Scrooge
More than a couple years ago, I brought my three children — then ages 5, 7 and 8 to see A Christmas Carol. It was their first time at the theater and I was well aware that it might not hold their interest and that we could be staging a fast retreat at the intermission or (God forbid!) even sooner.

Jacob Marley rattled his chains and they were on the edge of their seats. There was no talking, no "what's going on?" They were rapt. Still, given the attention span of that age group, I fully expected them to announce at half-time that they were ready to go home. No way. Instead I was asked how long they had to wait before it started up again.

It's that magic that has the Alley Theatre return to Charles Dickens' A Christmas Carol, over and over again.
Sometimes it's easy to overlook the genius behind the play, a tale of wrong priorities and redemption and ultimately love that makes a more than fulfilling evening out not only for children, but their parents as well. But that would be a mistake.

This year at the Alley Theatre, actor/director James Black will play Ebeneezer Scrooge. Alley Theatre Company actor Jeffrey Bean, who carried that role so well for so many years, has moved away to Philadelphia (and is cast in a play at Playwrights Horizons in Manhattan right now) and Black, who had played the role before Bean, will assume the mantle again.

Black says it was difficult to find another actor to fill the role — Bean cast a tall shadow. He talked to a couple other actors but they weren't available. Black says he thought "Why not?" and took the role back for himself. But with a difference.  "I did it first in the early '90s when I was in my early 30s and I remember putting most of my energy when I was that age into depicting old age, doing an hour's worth of make-up. At that age I didn’t have a real concept of regret or loss so I'm sure it was a performance that was probably about as deep as my layers of grease paint," Black says in his self-deprecating manner.

"Every year we say that this story is more relevant than ever, that it's said more than it ever said before. I don’t think it's necessarily society deteriorating or getting worse. I think it's that we're getting older, that the story kind of travels in parallel along with you so it hits closer to the bone the more road you have behind you than ahead of you. Ultimately, this story's about it's never too late to open your heart and when you do you can always open it a little wider."

Besides acting and directing in this production of A Christmas Carol, Black will continue his work as interim artistic director of the Alley through June, giving time for incoming new artistic director Rob Melrose to get his feet on the ground and plan the 2019-2020 season. Black took on the temporary role after former artistic director Gregory Boyd abruptly quit last June amid allegations of bullying and sexual harassment.

Asked what he learned from being an artistic director, Black laughs and says "That I prefer being an actor and director." After  31 years at the theater where he says he's had some really extraordinary and rewarding experiences working in theaters all over the world, he says, "There's nothing that I'm as proud of as what I had a hand in achieving here these past months. It was more triage than artistic directing; we were really deep in the weeds there for a while. But we’ve come out of it a stronger, healthier and happier organization."

One thing Black says he's really proud about is putting more diversity up on the Alley stage. "It was important the theater reflected the community. It was a deliberate choice on my part and it's going to continue."

A Christmas Carol is what's known as a cash cow, bringing people to the theater who might not otherwise. "It’s no secret that Christmas Carol and Summer Chills finances the season. What we try to do is get people through the door, it's a threshold experience, get people through the door who normally don't come to the theater. Impress them, intrigue them and hopefully that'll translate into single ticket sales at a later date or maybe season subscribers.

"it’s a great piece and I have a blast doing it. But it’s also a deliberate invitation."

And why do some people make attending A Christmas Carol an annual event? "It’s such an amazing story. It’s about compassion and redemption and what it fundamentally means to be a human being. We’re by nature societal creatures in a society that's made up of individuals but that society can’t thrive or survive without acknowledging and accepting responsibility for one another."

The Alley will once again be using the Michael Wilson version of A Christmas Carol. After this many years of either acting or directing the play, Black said he has had no trouble remembering his character's lines. The only problem he says, is knowing where he should be on the stage when he is delivering them. "I can't remember where I'm supposed to walk, where I'm supposed to stand, but the words, I'm fine."

Fortunately, he says, "I've got such a strong stage manager and production staff that I can lean on them to make sure I'm standing in the right place."

Performances are scheduled for November 16 through December 30 at 7:30 p.m. Tuesdays through Sundays and 2:30 p.m. Saturdays and Sundays at the Alley Theatre, 615 Texas. For information, call 713-220-5700 or visit alleytheatre.org. $37-$109.
California Privacy Policy California Collection Notice
Do Not Sell My Info
Use of this website constitutes acceptance of our terms of use, our cookies policy, and our privacy policy The Houston Press may earn a portion of sales from products & services purchased through links on our site from our affiliate partners. ©2022 Houston Press, LP. All rights reserved.