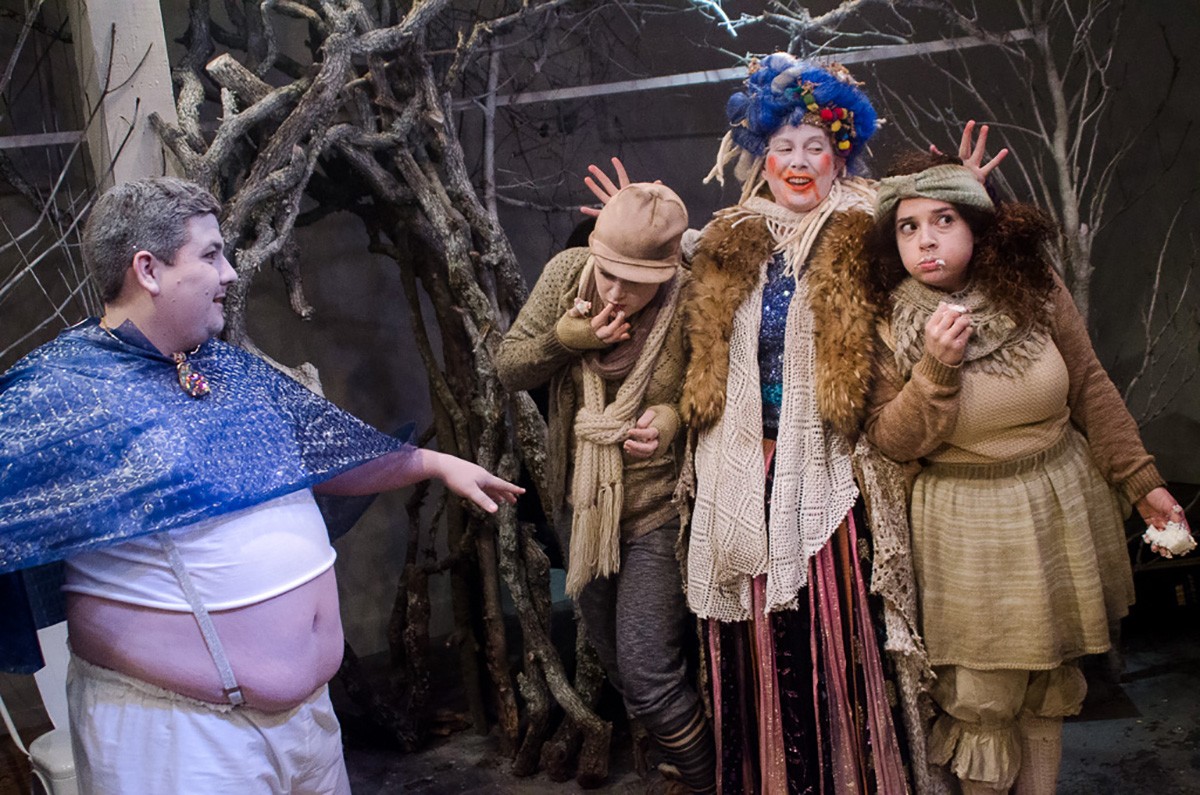 Photo by Natasha Gorel
Last year, Rec Room's Artistic Director Matt Hune deconstructed the primeval Grimm tale in disarming fashion with the operatic Hansel and Gretel. He's doing it again but hurry, tickets go fast.
Gingerbread works quite well if you're a cackling witch trying to fatten up lost, unsuspecting children. But it also seems to be a sturdy construction material. This spiced baked good turns up in both Rec Room's Hansel and Gretel and the Annual Gingerbread Build Off. The weekend also includes holiday cheer in the Kemah, Clear Lake, League City, Nassau Bay and Seabrook areas; a candlelight tour at the historic homes in Sam Houston Park; and an antler-friendly fun run in CityCentre. And because we don't know when to stop having fun, check out our bonus Monday-Tuesday offering that celebrates the classic crooner, Bing Crosby.

Last year's surprise holiday hit was Hansel and Gretel, an 1893 opera by Englebert Humperdinck presented by Rec Room that blew our theater critic away with its beguiling style, finesse and disquieting undertones. Ditch the orchestra for a pianist, throw in a pill-popping mom and a beer-guzzling dad, and it's no wonder the children have found themselves lost in the woods, only to fall into the clutches of Megan Berti's cackling witch with Rastafarian blue hair. Audience members will be immersed in a fairytale fog, encircled by twigs and branches and an arm's length away from the singers. It's an intimate space, seating just 30, so there were many of us who couldn't get in to see this showstopper during last year's sold-out run. Here's another chance.

By land and by sea, it's expected that more than 100,000 spectators will be enjoying the annual Christmas Boat Lane Parade.
Photo by Eddie Harper/PhotosbyEddieHarper.com
Why can't all geographic neighbors get along so well? The cities of Clear Lake Shores, Kemah, League City, Nassau Bay and Seabrook are co-presenting the annual Christmas Boat Lane Parade Saturday night, with hundreds of brightly decorated boats. The City of Kemah also is adding to the festivities with two days of fun in its Seasational Holidays. There's a Christmas parade for landlubbers that kicks off Friday night in downtown Kemah, followed by a lighting of the Christmas tree. This year's theme is Kemah's Candyland Christmas, further proving that holidays are sweeter in Kemah. Come back the next morning for two hours of pancakes and photos with Santa, then claim your spot later that evening when the power and sailboats traverse the Clear Lake Channel from the South Shore Harbour Marina and the Nassau Bay Lagoon to Galveston Bay.

Have you been naughty or nice?
Illustration by Getty Images
"Now, Dasher! now, Dancer! now, Prancer and Vixen!" It's time for all costumed holiday revelers and antler-bedecked athletes to head out to CityCentre for the 8th Annual Rudolph Fun Run, hosted by Tri Events. This popular west Houston shopping district has been decked out with Christmas decorations so come join in the 5K Fun Run, the Dasher 10K or the Cupid 1K, then smile for the camera and you might win a gift certificate for best Christmas costume. Stay after for pix with Santa Claus and special treats. Best of all? This event does allow running/jogging strollers, so bring the little tyke along.

Last year's Grand Prix de Show winner was "Nightmare Before Christmas" by Jackson & Ryan Architects. They're the ones to beat at the 10th Annual Gingerbread Build Off.
Photo by Rhonda Hudnall Photography
It's challenging but also fun to build a house out of gingerbread. Talented pro teams are going head to head this Saturday with Architecture Center Houston's 10th Annual Gingerbread Build Off, vying for the coveted Grand Prix de Show as well as other categories including architectural icon, tallest standing structure and Houston-centric. More than 4,000 spectators are expected to show up and vote for public favorite, and even amateurs can get in on the action at the separate Kids' Construction Zone. Don't miss the food trucks (10 a.m.-4 p.m.), pics with Santa Claus (noon-2 p.m.) and more.

Stroll through the cozy historic homes at Sam Houston Park and celebrate the season over a warm hearth at The Heritage Society's Annual Candlelight Tour.
Photo by Arie Moghaddam
Step back in time with the historic buildings at Sam Houston Park and experience 19th century life with pioneer demonstrations and stories, a traditional German Christmas and holiday decorations at The Heritage Society's Annual Candlelight Tour. Expert guides will even reenact what it was like to make a fancy feast for the wealthiest man in town. The Houston Boychoir will perform classic holiday songs in St. John Church, a structure built in 1891 by German and Swiss immigrant farmers. Stroll among these thoughtfully preserved buildings, and become part of Houston's history while making this a family tradition.

Enjoy great storytelling and classic music from Bing Crosy and The Andrews Sisters when A.D. Players presents A Bing Crosby Christmas.
Photo by Amy Boyle
Technically not the weekend, but we can't think of a better way to spend Monday or Tuesday night. A.D. Players is presenting A Bing Crosby Christmas for a limited two-night run. We've seen Broadway baritone Jared Bradshaw in Jersey Boys and Charlie and the Chocolate Factory and this time around he's stepping into the velvet lined jacket of American icon Bing Crosby. He'll be joined onstage by The Andrew Sisters; singing the roles are Houston vocalists Emily Speck, Brooke Wilson and Kelley Peters. 'Tis the season to be jolly and hear favorite seasonal classics including "Jingle Bells," "Chattanooga Choo Choo," "Boogie Woogie Bugle Boy" and "White Christmas."

7:30 p.m. December 10-11, A.D. Players at The George Theater, 5420 Westheimer, 713-526-2721, adplayers.org/bing-crosby-christmas, $25 to $75.
California Privacy Policy California Collection Notice
Do Not Sell My Info
Use of this website constitutes acceptance of our terms of use, our cookies policy, and our privacy policy The Houston Press may earn a portion of sales from products & services purchased through links on our site from our affiliate partners. ©2022 Houston Press, LP. All rights reserved.