Photo by Michael Tallman
Twelve Houston bars and restaurants will highlight Basque cider and wine in the coming weeks.
If long fermentation with natural yeasts in wooden casks doesn’t get you warm and fuzzy, drinking out of a porrón definitely will. First, erase the image of sippy-cup sweet, bubbly apple juice, because Basque Country cider is the farthest thing from that baby in a carriage. “High acidity, it’s savory, it’s light, it’s fruity without being sweet; it’s the other side of cider.” Chris Poldoian uses his cell phone light to shine up through a bottle of Txopinondo revealing a cloudy liquid and ambient yeasts floating within. It’s hard not to get just a little bit thirsty when the general manager and wine director of Camerata talks Sagardo, or cider. 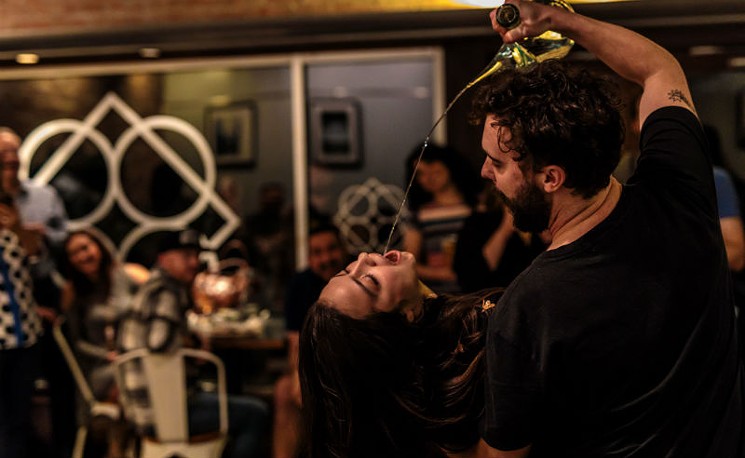 The porrón in action.
Photo by Shawn McDermott
Delightfully sour, this faintly effervescent liquid commands the palate in the most pleasant way. “It’s a really umami rich flavor and because of its unfiltered quality you get a lot of character— it goes with a lot, it cuts through the fat.” True this beverage is insanely versatile and often times paired from start to finish, salt cod to steak, at the cider houses or Sagardotegi, that transition into restaurants every year around January 20, El Día de San Sebastián.

Poldoian’s longtime passion for the region, and a visit to San Sebastián and Bilbao the year before taking the position at Camerata in 2016, inspired him to bring the annual cider party to Houston with Texas Txotx. "Txotx,"  pronounced “choach,” it’s what every Sagardotegi owner shouts as he taps the kupela while opening the spigot to let forth a five-foot spray of cider to be caught by the tasting mugs of eager patrons. Referred to as “catching cider;” outside of this experience, the porrón is used to emulate the thin stream that exits the barrel aerating the liquid in the process.

Now in its third year, Texas Txotx festivities, shepherded by Poldoian, begin as they do in Basque Country, on El Día de San Sebastian. From January 18 to 31 several Houston hot spots, a few in Austin and San Antonio too, will participate in celebrating Basque Country cider and wine.

“Instead of being buried in a wine list, it’s a chance to let Sagardo shine.” From the initial collaboration between Adele Corrigan at 13 Celsius and Justin Vann of Public Services Wine & Whisky, to the addition of 14 more Houston, Austin, and San Antonio bars and restaurants, Poldoian is excited to unite with fellow professionals in the name of cider.

“We are all in our own four walls, but when we are able to encourage our guests to check out another restaurant or bar they haven’t been to before, for me, that’s beyond exciting. I see Houston as a very cooperative city, I think there is friendly competition between us, but at the end of the day we’re all working towards the exact same goals; introducing people to new and exciting beverages and raising Houston up. I like the saying: a rising tide raises all ships.”

It’s fitting this flavorfully complex beverage comes from the Basque people a.k.a the quiet badasses of human history. Located along the southern coast of the Bay of Biscay, down to Rioja and sandwiched in between the Spanish and the French, they are fiercely neither. For thousands of years they’ve maintained the please don’t touch me vibe managing to never lose their identity. Their language, Euskera, is the oldest in Europe, and makes Latin look like a little—child. Remember when Charlemagne was running around like, “I’m conquering all y'all.” The Basque were the only ones able to say, “nah.” And remember when they commercialized whaling, an industry equivalent to oil and gas today? Attn: Dan Brown, you getting this?

Lush and mountainous, the northernmost part of Basque Country is the perfect terroir and climate for growing apples though these aren’t quite the kind for pie. Highly acidic and tannic, there are more than 100  indigenous varieties grown in the region. In September, apples are harvested, pressed and the juice is left to ferment in large wooden casks until January. Only natural yeasts found on the apple skin is what does the trick— and also why it takes longer and isn’t very carbonated. Poldoian explains that ciders will vary from barrel to barrel because of the uniqueness of the ecosystem within.

A few recommended cider brands to taste per Poldoian:

On top of offering these tasty beverages, the best part of this two week celebration are the several “meet the cidermakers” as well as educational and entertaining events to be held. More information is available on the iTxotx! website.