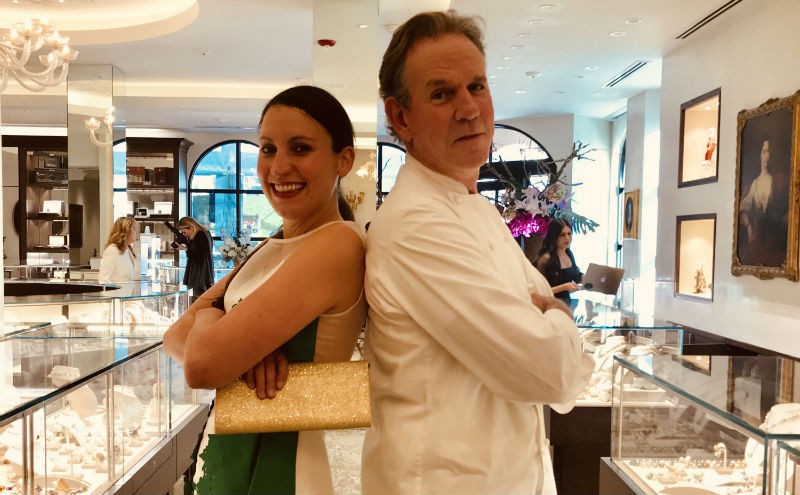 
Fourth generation jeweler Franco Valobra called on his friends to cater the spread— Keller was on seafood, Boulud handled charcuterie, cheese, and bread, and Bocuse, the sweet stuff.

When American baby cooks first hatch, there in the incubator waiting for them is a copy of The French Laundry, or perhaps, Under Pressure. For the English, it’s Heston Blumenthal and The Fat Duck. For the rest of the world, it’s Ferran Adrià and A Day At El Bulli. But for us, it’s Thomas Keller.  He is our unanimously voted President— and the term is forever.

Thomas Keller teaches us how to imagine; his work coaxes a deeper look into the plate, the palate. Each portrait has a theme, a whimsical celebration of something as trivial as a spring morning. He inspires us to tediously sift our creativity, to throw out the first four ideas that come to mind, and then, just maybe, the fifth becomes a starting point.

The Houston Press sat down with Thomas Keller, and tried really hard to play it cool...

Houston Press: What do you prefer, Sonoma or Hudson Valley Foie?

Thomas Keller: Well, I mean, you know, you can’t serve foie in California, it’s been deemed illegal. The case was actually taken to the supreme court and they refused to hear it. So, we have no foie gras in California, and Sonoma foie they haven’t made for a decade.

TK: No, that was banned a long time ago. When it was legal we were buying most of our foie gras from Canada.

HP:  What’s your favorite late night pasta to make for yourself?

TK: I try not to eat late night, I stopped that when I turned 40. But, my favorite pasta would be Cacio e Pepe.

TK: That would be my favorite. I try to eat it early so I can burn off the calories before I go to sleep.

HP:  I’m a chef too, I was Tony Vallone’s chef at Tony’s for three and a half years.

TK: Let me see your arms.

The Houston Press holds up her arms.

HP: Yeah, that’s a fresh one from Saturday night.

HP: Six years ago, Tony took us to Per Se.

HP: I was able to do your offal tasting menu.

HP: It was the best meal of my life.

TK: Thank you. We love to do those special menus that are specific to one type of theme, whether it’s offal, or vegan, or truffles, or caviar, or tomato for example.

HP: What are you excited about right now?

TK: Well we have Hudson Yards opening next month, on the fifteenth of March, so almost a month away. We just opened a Mexican restaurant, La Calenda, on January 3. So that’s going strong, we’re excited about that.

HP: After a late night of cooking, if you could have one glass of wine what would it be?

TK: Ah. That’s interesting. It would probably be a Brunello or a Zinfandel.

HP: Oh wow, good choice, I actually just got back from Montalcino.

HP: Thank you so much for coming to Houston. I’ve been freaking out knowing I was going to meet you. You know, we all look up to you.

Ten minutes later he nonchalantly hands his phone to the Houston Press so she can take a picture of him, Daniel Boulud, Jerome Bocuse, and Franco Valobra. The Houston Press first took a selfie, and then proceeded to take their picture. 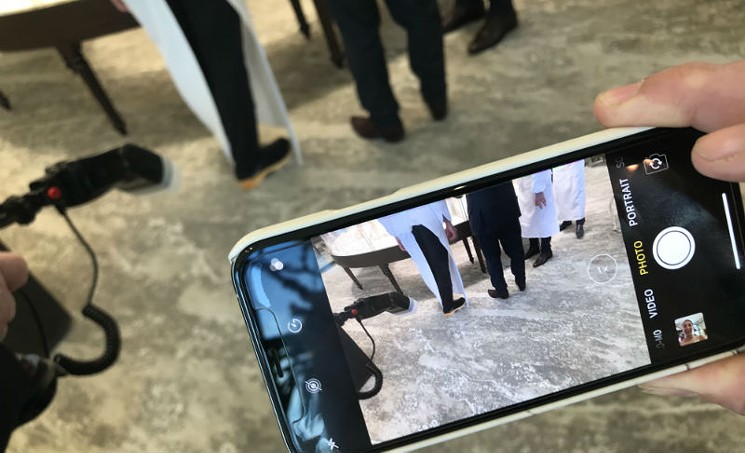 Thomas Keller's iPhone.
Photo by Kate McLean
The Houston Press and Culture Map overheard a lady ask Thomas Keller if he was one of Daniel Boulud’s chefs.

HP: (whispers to Culture Map) Did you hear that?!?

CM: I think she was serious.

TK: (responds to the lady, graciously) Yes! I’m one of his minions. I would love to work for him.

The Houston Press and Culture Map continue to eat caviar, toast, crème fraiche, and chives. Thomas Keller walks over and begins to explain the caviar. He reaches down to take the dirty cups out of the Houston Press’s hands.

HP: Oh no, it’s okay, I got this, don’t worry chef, I’ll throw it away somewhere.

TK: Here just give it to me.

Thomas Keller takes the dirty cups out of her hand and goes to throw them away.

HP: Bye chef, I just wanted to thank you so much… it was so nice, it was amazing, it meant a lot to meet you. Thank you.

TK: Are you leaving?

HP: Yes, I need to go write an article about you. 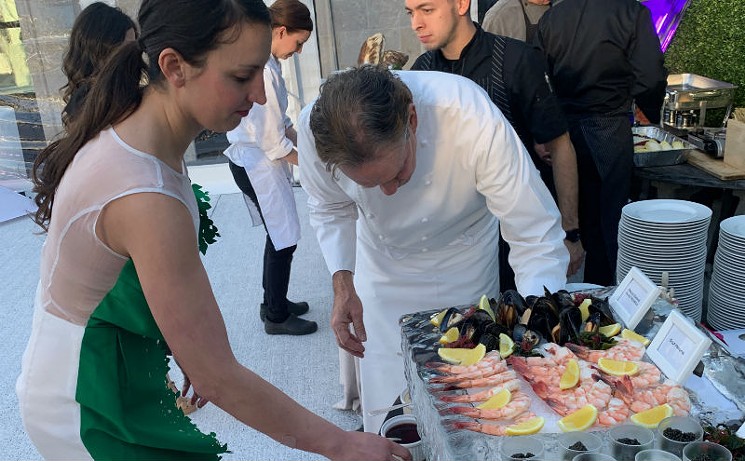 Trying to be a good helper. (Chef Omar Pereney is actually helping.)
Photo by Eric Sandler