Dinner at Eight: How Do You Put on a Dinner Party After the Stock Market Has Crashed? 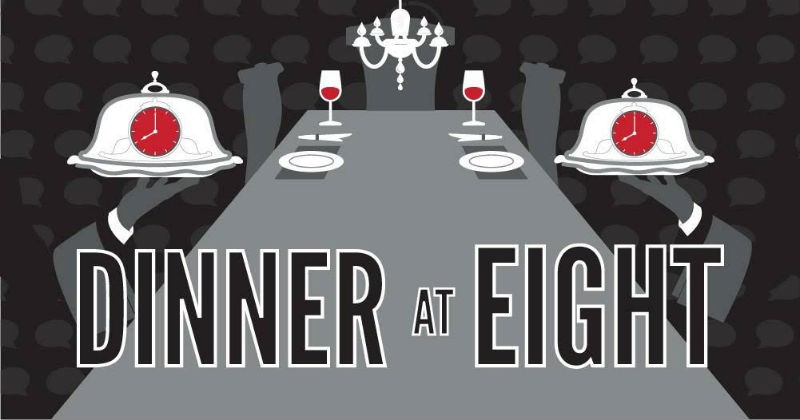 Poster by Moores Opera Center
Art deco at its finest.
The stock market has already crashed in 1929, but still a socialite has a dinner to put on. Losses of power are everywhere among the moneyed. What follows is both comic and tragic.

It's the regional premiere of Dinner at Eight about to be put on by Moores Opera Center at the University of Houston. It's based on the 1932 Broadway play by George S. Kaufman and Edna Ferber, which was later made into a movie in 1933. The opera by composer William Bolcom and librettist Mark Campbell debuted in 2017 at the Minnesota Opera in St. Paul and has been variously described as a dark comedy or a comic melodrama.

"It looks like it's going to be a typical comedy of manners of the period," says Buck Ross, Director of Moores Opera Center. But because of when it is set, in 1931, it isn't. "It's people used to a certain style of living suddenly finding out that it doesn't work anymore."

The Manhattan socialite, Millicent Jordan, is about to entertain Lord and Lady Ferncliffe from England and needs to invite other people to sit at the table. Everything that could possibly go wrong then does so — infidelities are revealed, one person kills himself and the Ferncliffes decide at the last minute to go to Florida instead.

"The composer is someone who has always sort of straddled classical and popular music. so the piece has some Broadway elements in it as well as operatic ones," Ross says.

The other advantage of doing this two-act, two-hour including intermission opera is that it calls for a big cast and spreads the aria wealth about, Ross says. Art Deco designs and costuming will be on full display.

"I think part of the message has to do with how you cope with unexpected changes of fortune, Ross says. "It’s kind of the end of an era for these people. Much like Downton Abbey. They are old money people and expecting things to be the way they used to be. And they're not."

And after all, it's not often that you get to see an opera that includes lobster in aspic crashing to the floor.

Performances are scheduled for 7:30 p.m. April 5, 6 and 8 and 2 p.m. April 7 at Moores Opera Center, 120 School of Music Building on the University of Houston campus. For information, call 713-743-3388 or visit the Moores Opera Center website.  $10 students, $15 seniors, $20 general admission.
California Privacy Policy California Collection Notice
Do Not Sell My Info
Use of this website constitutes acceptance of our terms of use, our cookies policy, and our privacy policy The Houston Press may earn a portion of sales from products & services purchased through links on our site from our affiliate partners. ©2022 Houston Press, LP. All rights reserved.