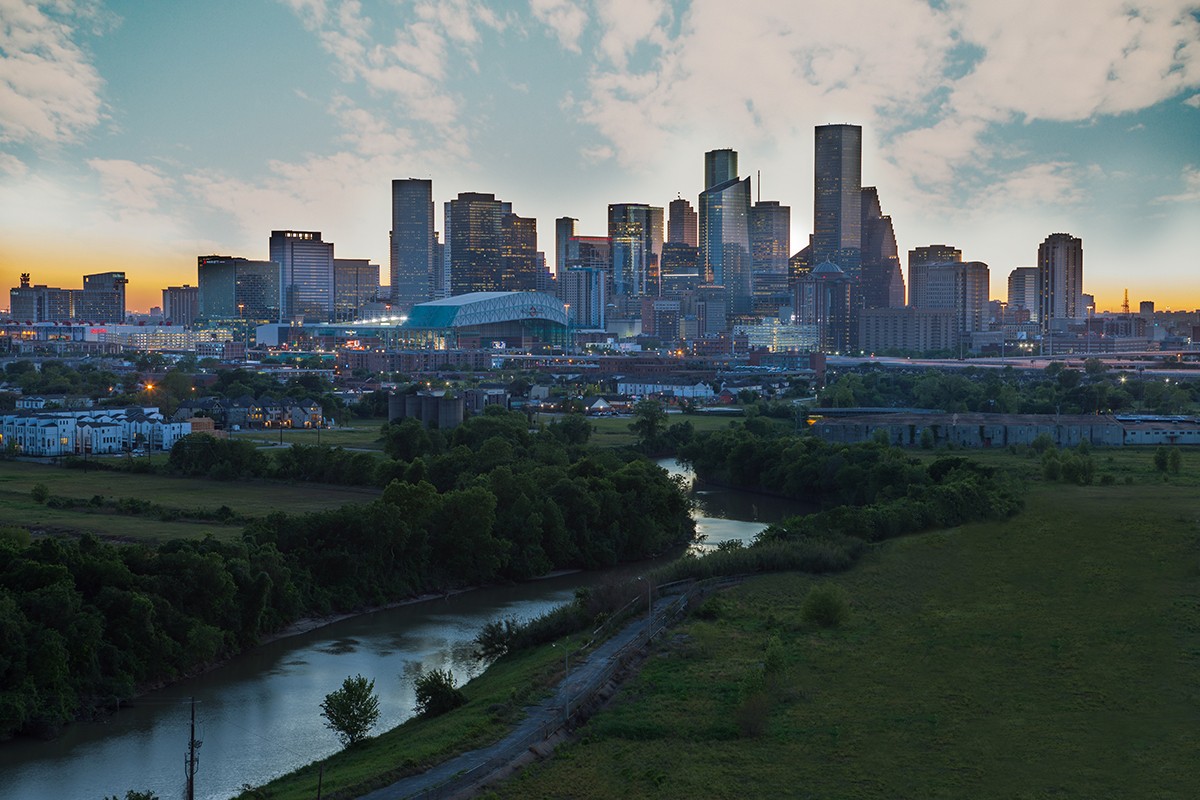 Photo by Shannon O’Hara
Midway is in the early stages of transforming approximately 150 acres east of downtown to create a multi-phase, mixed-use development along the waterfront.
Longtime Houstonians will remember what happened to sleepy Town & Country Mall when Midway waved its magic wand. The resulting CityCentre has turned into more than stores and shopping; it's a self-contained destination spot with green spaces, promenades and plazas, live entertainment and luxe brownstones and lofts.

Magic is happening again, this time just east of downtown along the shores of Buffalo Bayou. Anybody wondering how Midway was able to find approximately 150 acres of prime real estate inside Loop 610 should look to the history books: East River is being developed along the site of the former Kellogg, Brown and Root (KBR) complex.

Midway, a privately owned real estate investment and development firm, plans to develop East River over decades.
Graphic by Midway
Granted, it will take decades before East River completes construction on what will be equivalent to 60 downtown blocks, but as each stage becomes activated it will draw even more Houstonians to this mile of waterfront along Buffalo Bayou that previously wasn't easily accessible.

Midway does have some renderings created during 2017's bid to lure Amazon to the area, though changes have since and will continue to be made as the project takes shape. Midway is the developer, Gensler is the architect and BGE is the civil engineer.

Props to Midway for saving almost 300 trees during the redevelopment of Post Oak Boulevard in Uptown, as well as from other locations. Those trees have been replanted along Clinton Drive and will eventually line the streets, walkways and parks of the East River development zone. The office of James Burnett is handling the landscape architecture, while Environmental Design is the arborist of record.

East River will connect people to green spaces and more than a mile of waterfront along Buffalo Bayou.
Photo by Shannon O’Hara
Buffalo Bayou Partnership has been granted an easement so that it can extend its trail system into the new area. In addition to cooperating with BBP, developers are working with the City of Houston, Harris County, the Fifth Ward Community Redevelopment Corporation, and the Greater East End Management District, among others.

It's too soon to tell if the first brick-and-mortar building will be residential, commercial or arts-related, but that hasn't stopped the rumor mills. The architecture buffs/sleuths on HAIF are hypothesizing that the Houston Maritime Museum will build its new museum building here instead of at the Port of Houston, while Virtual Builders Exchange says clues lead to it being a grocery store at the corner of Clinton and Jensen.

Fun fact: During Houston's early years the bayou was known as the Buffalo River, as discovered in archival maps and postcards. Naming Midway's next project East River offers a nod to those early days of Houston's industrial history.

In addition to CityCentre, Midway's portfolio of mixed use projects in Houston — either completed or underway — includes Kirby Grove, GreenStreet, Kings Harbor, Memorial Green and the Buffalo Heights District. Midway's plans for East River, once complete, calls for the development of spaces for office, multi-family, hotel, theater, parking, townhomes and a museum, as well as boat docks, parks and trails.