Film still by MK2
The Trouble with You (En liberté!) screens at 7 p.m. March 23, part of MFAH's Five Funny French Films.
There are plenty of French comedies, but that doesn't mean they're all funny. At least not to discerning American audiences across the pond.

But perhaps Tracy Stephenson is the toughest critic of all. As coordinator and assistant programmer of film and video for the Museum of Fine Arts, Houston, she knows what to look for in helping select the entries in MFAH's annual Five Funny French Films series.

"It is a lot of fun, but harder than you think. We have to go through a lot of films and I’ve created a rule that if I don’t laugh out loud within 10 to 15 minutes, I have to put it aside," says Stephenson.


She tells us that a couple of the films this year have dramatic elements, which can sometimes put a damper on laughter, but gives high praise for The Trouble with You (En liberté!), about a widow who discovers her heroic husband was actually a crooked cop. "It's really funny; it has nine César [Award] nominations, that's like the French Academy Awards."

In fact betrayal pops up more than once in this years FFFF. In Dumped (Larguées), a woman finds herself single again after her midlife-crisis husband takes off with a much younger woman. Her daughters decide a beach resort is just what the doctor ordered, but can't agree on much else.

The theme recurs in Rolling to You (Tout le monde debout) about a playboy who, not only is a compulsive liar, also pretends to be handicapped to seduce his neighbor. Though the tables get turned when she passes him on to her gorgeous and talented sister who really is wheelchair bound.

Franck Dubosc, the actor who portrays the scoundrel, also directed and co-wrote the film. It includes a visually stunning swimming pool scene with a flowing red dress and has been labeled smart, funny and with just the right touch of craziness. "He’s a real jerk at the beginning," says Stephenson. "He was really good in this film." 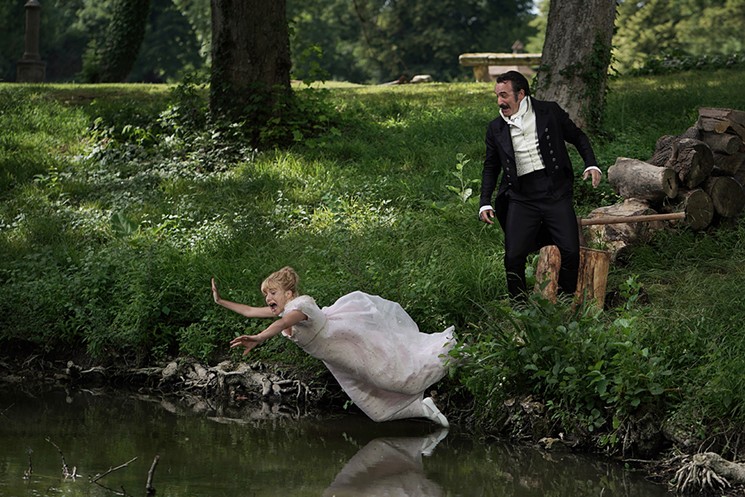 "This takes place in the 19th century. The filmmaker [director Laurent Tirard] says that he likes to use different eras with nods to the flaws of our world today. The pyramid scheme with the captain, that's a reference to Bernie Madoff and his Ponzi scheme. They also talk about women getting paid not as much as men."

Organizers have tossed in one throwback film, but it's a good one: The Baker’s Wife (La femme du boulanger) from 1938. Stephenson says the MFAH screened director Marcel Pagnol’s Marseille Trilogy (César, Fanny, Marius) a few years back and, since there's a new digital restoration of Pagnol's The Baker's Wife, and it's a comedy, they decided to include it as a FFFF classic. "He was a popular filmmaker and this is a well-regarded film."

FFFF is a component of the French Cultures Festival, presented in Texas, Oklahoma and Arkansas by the Cultural Services of the French Embassy in Houston, Texas. The festival kicks off this Friday, March 8, from 6 to 10 p.m. with live music and performances at Discovery Green, 1500 McKinney.

7 p.m. March 22, Rolling to You (Tout le monde debout)
9:15 p.m. March 22, Return of the Hero (Le retour du héros)
7 p.m. March 23, The Trouble with You (En liberté!)
9:15 p.m. March 23, Dumped (Larguées)
5 p.m. March 24, The Baker’s Wife (La femme du boulanger)
California Privacy Policy California Collection Notice
Do Not Sell My Info
Use of this website constitutes acceptance of our terms of use, our cookies policy, and our privacy policy The Houston Press may earn a portion of sales from products & services purchased through links on our site from our affiliate partners. ©2022 Houston Press, LP. All rights reserved.