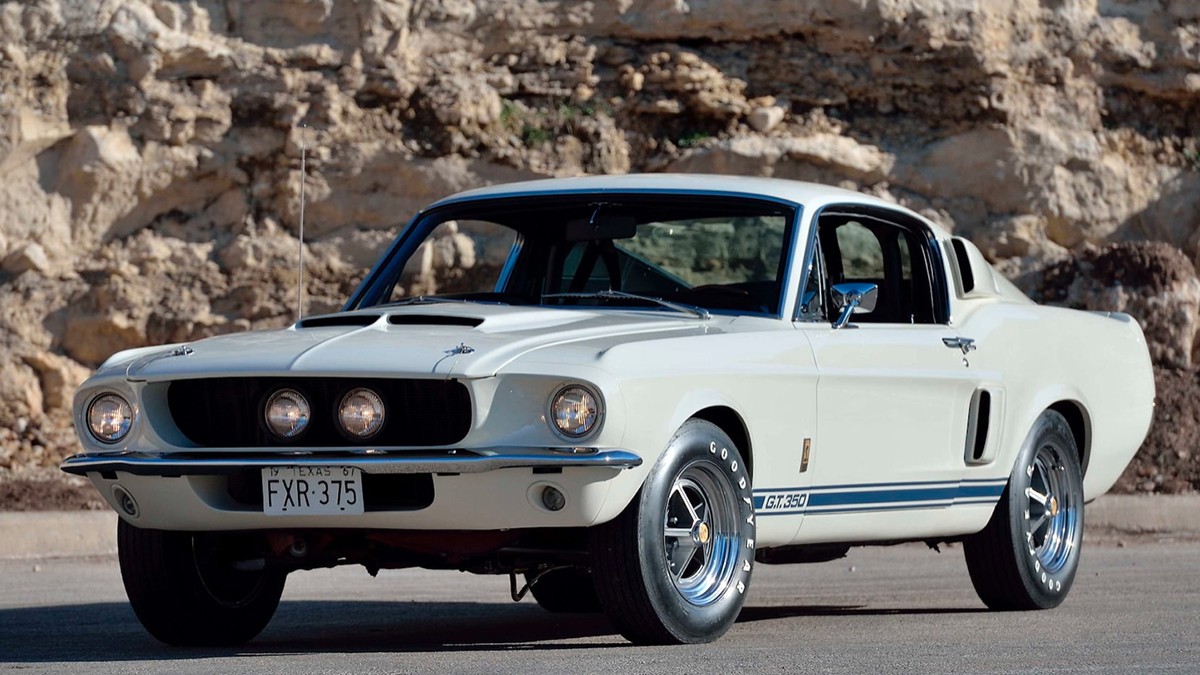 Photo by David Newhardt, Mecum Auctions
Among the main attraction consignments at Mecum Auctions is a 1967 Shelby GT350 Fastback, the result of a concours nut-and-bolt restoration completed in 2017.
There's literally something for everybody this weekend in Houston. Muscle cars, literary superstar Margaret Atwood, opening day for baseball, and even a plant sale to jumpstart your pollinator garden. Film buffs can choose between attending WorldFest or seeing home movies on the Menil's exterior; music lovers have opera, chamber music and the scores from Hitchcock thrillers; and there's also a cerebral look at what it must feel like to be Muslim in America after 9/11. Keep reading but be forewarned, you'll want to do it all.

More than 1,000 muscle cars, classics, Corvettes, exotics, hot rods and motorcycles are up for grabs this weekend when Mecum Auctions takes over NRG Center. Guatemalan businessman Mario Sueiras spent 50 years in pursuit of rare cars and 50 lots are coming from his private collection, including 13 microcars. But everybody is talking about the main attraction consignments, including a 1967 Shelby GT350 Fastback; its restoration was completed in 2017 and incorporated mostly original parts. Mecum is the world's largest collector-car auction company so, whether you're a buyer, seller or spectator, it's going to be an exciting weekend.

Society for the Performing Arts presents An Evening with Margaret Atwood.
Photo by Liam Sharp
We won't know Offred's fate until September when Margaret Atwood's The Testaments: A Novel drops. But until then longtime readers and new converts from Hulu's The Handmaid's Tale can look forward to An Evening with Margaret Atwood this Friday night, courtesy of Society for the Performing Arts. She'll dish on literature, social activism, political engagement and the creative process, as well as on the artist’s role in society, technology and art.

If you've got an up and coming Spielberg or Lucas in the family, or want to see what neighboring artists have been up to, then head out to BYOB (Bring Your Own Beamer), where images, videos and films are projected onto the outside facade of The Menil Collection. It's a partnership between the museum and Aurora Picture Show and was inspired by the 2010 event in Berlin that was conceived by New York-based artist Rafaël Rozendaal. Bring your picnic baskets and blankets to the Main Building Lawn. The rain date is April 12.

The Houston Astros open the season with home games against the Oakland Athletics.
Photo by Marco Torres
It's a new season of baseball and everybody has high hopes for making the postseason, including fans of the beloved Houston Astros. This Friday night's season opener pits the 'Stros against the Oakland Athletics, with free 2019 schedule magnets and post game fireworks (Friday's theme is "baseball classics"). Find an excuse to cut out of work early this Friday for the Opening Day Street Fest, presented by Budweiser, from 2:30 to 6:30 p.m. with live music, food trucks, inflatables and giant Jenga. Or turn the weekend into a baseball marathon and attend all three games against the A's.

Where were you when you got the news about 9/11? We can all answer that one, but the roads differ when the question changes to "How did it affect you?" Theatrical innovator Ping Chong paired up with Sara Zatz and Ryan Conarro to write Beyond Sacred: Voices of Muslim Identity, an evening of theater and projection making its regional premiere courtesy of Asia Society Texas Center and Ping Chong + Company. Hear what it is like for five young Muslim Americans who identity with either the newly converted to Islam, those who identify as "culturally Muslim," those who observe it on a daily basis, or those raised Muslim but who have since left the fold.

WorldFest Houston is a showcase of indie film premieres, shorts and documentaries, but among the 4,500 entries vying for the coveted Remi Award are also television commercials, music videos, student films and webisodes. Aspiring filmmakers will want to check out the master classes in subjects ranging from scriptwriting, production and even a conversation with NASA cinematographer John Streeter. Among the 55 or so features making their premiere are William, where a baby is created using Neanderthal DNA; The Truth About Marriage, a documentary by the filmmaker who directed Trekkies; and the Eric Roberts vehicle Lone Star Deception, where a dalliance with a prostitute undermines a gubernatorial candidacy, making way for what could be Texas' first black governor.

Kanisha Feliciano, a second-year graduate student in the Moores Opera Center program, plays the role of Kitty Packard.
Photo by Julius Sanchez
Don't be late for this very important date when the new-ish opera Dinner at Eight transports Moores Opera House into a circa 1930s Manhattan dinner party. From the drawing room to the office, and from Kitty's bedroom to her nouveau riche penthouse, expect a big cast and even bigger laughs in this 2017 opera based on the play by George S. Kaufman and Edna Ferber, with music by William Bolcom and libretto by Mark Campbell. You'll need a spreadsheet to keep track of the infidelities, betrayals and double crosses before the big dinner is ever served.

If Fido greets you at the door with his leash, it means he wants you to take him to the 2019 Doggy Party on the Plaza, sponsored by Houston Dog Ranch and Peace Love Dogs. There's a K9 costume contest, a free photo booth for you and your bestie, plus a big parade with local rescue groups. This year's emcees are Great Day Houston's Deborah Duncan, and David Paul and Lisa Hernandez from KHOU. It's a full day of fun with games, contests, raffles, face painters and vendors.

Doggy Party on the Plaza is scheduled for April 6 from noon to 5 p.m. Saturday at CityCentre, 800 West Sam Houston Parkway North. For information, visit doggypartyontheplaza.com. Free

ROCO has been playing games all year with creatively titled concerts and next up is a musical riff on Pac-Man with ROCO Unchambered: Chase Sequence. Composed by James Stephenson for brass quintet, Chase Sequence calls on ensemble members to imitate one another and try to catch up with the previous player, resulting in an exciting performance with interesting harmonies and motifs. The program also includes works by Reena Esmail, Anthony DiLorenzo and Alexandre Brasolim, as well as arrangements of classic jazz tunes by ROCO's George Chase. 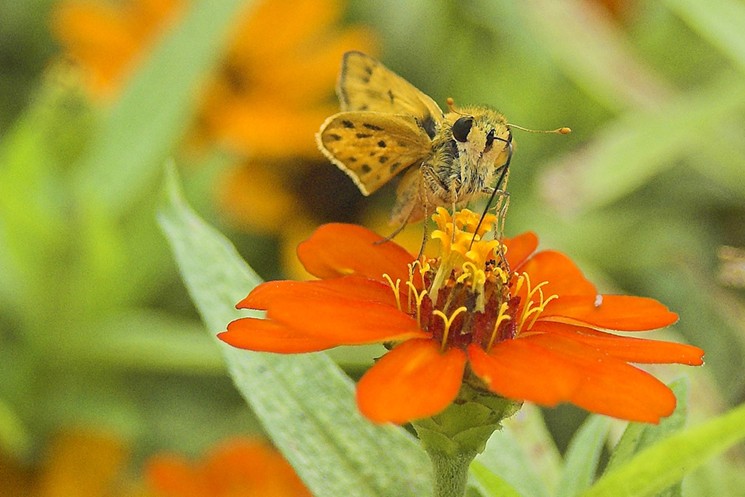 The Spring Plant Sale is scheduled for April 6 from 9 a.m. to noon Saturday at the Houston Museum of Natural Science, 5555 Hermann Park Drive. For information, call 713-639-4629 or visit hmns.org/cockrell-butterfly-center/spring-plant-sale.

Turn the volume down on a horror flick and it becomes infinitely less scary. We count on that music to build suspense and, for Alfred Hitchcock, his go-to guy was composer Bernard Herrmann. They collaborated on Vertigo, Psycho and The Man Who Knew Too Much, and now Axiom Quartet is presenting a suite of music used in Hitchcock's films in The Sound of Hitchcock. The program includes other, less frightening works by Hermann, including the romantic Souvenir de Voyages and the nostalgic Echoes.

A performance is scheduled for April 7 at 5-8 p.m. Sunday at the University of St. Thomas, Cullen Hall, 4001 Mount Vernon. For information, call 713-444-3392 or visit axiomquartet.com/2018-2019-season. Free (register on Eventbrite).
California Privacy Policy California Collection Notice
Do Not Sell My Info
Use of this website constitutes acceptance of our terms of use, our cookies policy, and our privacy policy The Houston Press may earn a portion of sales from products & services purchased through links on our site from our affiliate partners. ©2022 Houston Press, LP. All rights reserved.